One of the greatest shows dedicated to being a young professional returns, and it’s as dramatic, emotional, and life-affirming as ever.

Images and text in this post may contain affiliate links which, if a purchase is made, we’ll earn money or products from the company. Affiliate links, and external links in general, contain an upward facing, superscript, arrow.

In the end, Jane chose Ryan aka Pinstripe, and it seems part of the reason might be his peen stripe, as Sutton says. Hey, Ben is nice and all but things changed once he learned her diagnosis and that killed things. Perhaps proving that while Jane is ready to date and be exclusive, she might not be ready for a full-blown relationship. Especially one which could transition into a marriage. 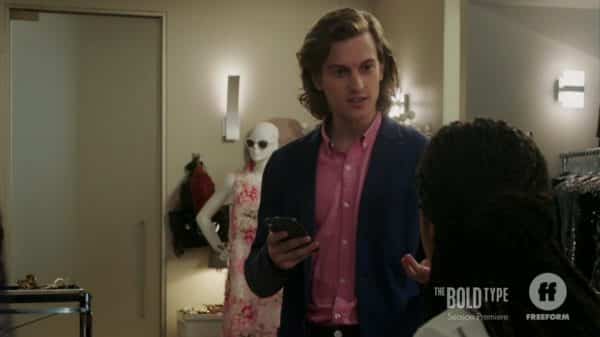 As you can imagine, Jane’s loyalty to Jacqueline knows no bounds. So, with a man, albeit an eccentric and ever so slightly flamboyant man, named Patrick becoming the head of digital, Jane has instant beef with him. Mind you, this is partly due to Jane’s guilt of pushing Jacqueline to publish an article against Scarlet’s parent company. Yet, despite recognizing the situation is partly her doing, and Patrick likely didn’t know what went down, she has daggers set for him.

Thus making him offering the chance to write something on him a welcomed chance to expose him. However, all she learns is he exposed himself to fight for pay equality at his former employer. Leading to Jane being made to feel like the ass she is. But, to put icing on the cake, Patrick reveals to Jane she will be a full-time writer for digital under him so whatever lingering animosity she has? Oh, she needs to handle that quick.

Remember how, formerly, Sutton was the one fearful of what would happen if she went public with Richard? Well, from what it seems, he is the one dealing with being ostracized and treated differently. Thus making him feel a bit uncomfortable in his professional life, but trying to double down by asking Sutton to move in and even say this to Jacqueline. Someone who, maybe to be petty, perhaps since she is worried about Richard making impetuous moves, questions if he is thinking straight? After all, it has only been a month since his dad died (and the events of the season 2 finale). But, he seems sure of himself.

Something Sutton, for a little bit, wasn’t as sure about. Mind you, she doesn’t care about some of Richard’s co-workers, like Eli, saying stuff about her or her relationship with Richard. However, like Jane, one could argue she is starting to recognize how serious things are getting and that she could potentially cross over from things just being fun and dating to a full-time, adult, relationship. But, unlike Jane, who ran to the fun one, Ryan, Sutton doubles down and says she will move in with Richard. All the while helping him to learn, as she did, to put what they have first and nevermind what others say.

Yet, while a person can learn to silence out others, silencing out your own thoughts is a bit hard. Such is the case for Kat who, with her still trying to work out what happened in Paris, is trying to avoid anything which could confirm Adena is gone. She hasn’t been on her personal social media much, is ignoring Adena’s packed up things, and even goes drinking with Alex – kisses him even. Leading to him realizing she is a bit of a mess right now so, with being one of her best guy friends, and them having a Black people meeting about how she is feeling, he takes her home. Then, to prep her for Patrick, he makes sure her alarm was set. 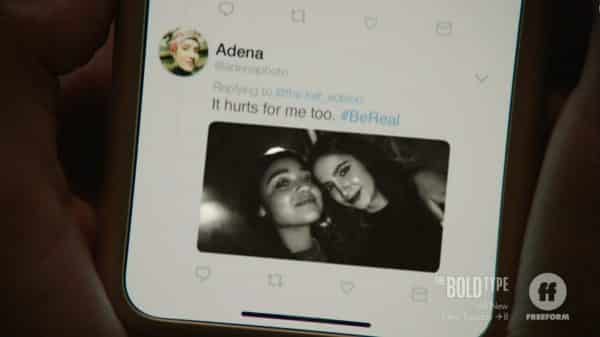 Oh, and speaking of Patrick, while him putting Jane in her place may make you love him, how aggressive and intrusive he is with Kat may 180 all that. For if it isn’t pushing her to expose her personal life more on social media, it is crossing the line a bit and bringing up a lot of private things, like her sexuality, as if Scarlet owns her. Yet, Kat takes his criticism of her not being completely honest and decides to #BeReal. She talks about her breakup, shows what she looks without makeup, and while it is hard, and Adena says it is for her as well, she opens up in ways she sometimes even avoids doing with Jane and Sutton. Leading to her reaching a new point in her life just as her friends.

While it was missing Oliver, it was nice to see Alex and Kat have a moment together. Especially after them having a small tiff over her blackness last season and it slightly shifting their relationship. However, now Alex seemingly has returned to being everyone’s best guy friend, and while that leads to Kat kissing him, it seemed bound to happen.

Which isn’t me saying Jane is next, but with Alex being kind of consistent, in being a good guy, it isn’t a surprise Kat would see if maybe there could be sparks there. She is trying to get over Adena, and while we’ve seen Kat single, that was before she took on such a massive load at work. So having someone in her corner like Alex, it triggered what she needed at the time. With that said, I don’t ship them. In fact, I don’t think I ship Alex with anyone we’ve met. Which kind of stinks but he is the flag bearer, dating Sutton aside, of being a platonic, straight, male best friend.

While pushy when it comes to Kat, which gave me pause, he presents a different challenge to Jane which feels necessary. Jacqueline’s mentorship, while invaluable, also exposed Jane for her bias. Largely, Jane is pro-women in such a way which has limited her scope in a way. So with working under a man, maybe being coerced to write about a more diverse group of topics, changing her perspective, it may make her more well-rounded.

Now, mind you, like Jacqueline, Patrick seems to like when pieces are personal. However, he takes things to the next level, and that may rub Jane the wrong way. Yet, with Jane having such an issue getting out of her comfort zone, this might be what she needs.

Kat has been pushed, within the last season, to own her narrative in ways she hasn’t before. Be it her Blackness, her queerness, and her flaws. Yet, like Jane, it seems she is going to be pushed even further, and it may lead to a lot of interesting questions in regards to not only work/ life balance, but where is the line? Social media manager is still a fairly new job and perhaps continues a lot of misinformation. So with seeing Kat in action, with a boss like Patrick, it should be interesting to see if and when Kat draws the line.

Richard On The Ropes

Most of the time, as we saw in the past with Sutton, we see the woman suffer for dating within the company, an older man, things of that nature. Flipping things a bit and seeing Richard suffer, Sutton be the strong and confident one, it was quite refreshing. Also, to The Bold Type’s credit, the gender swap doesn’t feel forced or unnatural. What Richard goes through seems real for whether it is Eli or Jacqueline, who seemingly means well, you can sense the judgement. Even Jacqueline is perhaps co-signing on the exclusion and poking the bear by noting she knew, to Sutton, about her and Richard moving in with one another. Despite her, to my knowledge, not having that kind of relationship with Sutton where they get personal like that.