Open relationships, gun violence, and gun ownership get featured and only as The Bold Type knows how.

Being that Adena spent 10 years sowing her oats, figuring out what she likes, doesn’t, and knowing what role she plays in a lesbian relationship, she wants that for Kat too. So, she allows for an open relationship. Something which doesn’t get a lot of questions or side eye from Kat or her friends. She was given permission, with a few ground rules, so off Kat goes.

Thus leading to Gina. A gig economy driver who Kat meets while traveling with Sutton and Jane and is eating the box of the next. While also coming to realize, after being submissive with Adena, she likes being dominant. A topic she has to speak with Adena about because, as much as Sutton speaks about being bi, maybe, she hasn’t full on dated a girl. The only one Kat knows who has, who she is comfortable with, is Adena. So while it makes her a bit uncomfortable to hear what her girlfriend does with other women, she becomes the sounding board for her baby gay. 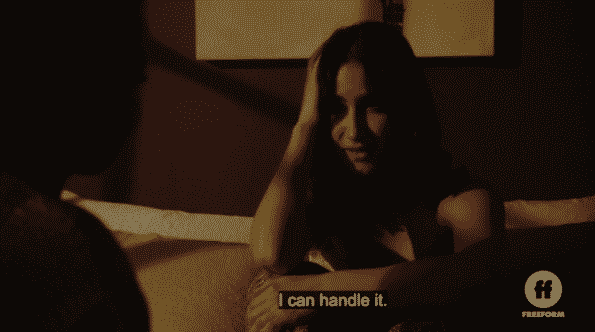 Adena: I can handle it

I’m trying to understand how Adena can do this and Kat not ask any real questions. I understand she thinks Kat not getting to know and understand her sexuality, in full, with multiple partners, may make her resent her one day but come on! Already there is an emotional toll because Kat kissed another woman and now you are giving her permission to have sex with other women? Just as long as no emotional attachments get formed and you get her exclusively on weekends? Surely I’m not the only one questioning this right?

But, then again, look at Adena’s options. A full on break up isn’t possible because Adena has no income. Much less, while not strongly versed on the whole visa thing, Kat is more than likely sponsoring Adena or involved in that process. So she doesn’t really have the option to go anywhere. All she can do is guide Kat because stopping her, or leaving her so she can be free to do as she pleases, would only hurt her more.

However, Kat taking to this whole open relationship idea, and her friends co-signing, especially Jane, seems so off. I get this generation is thought of to be much more open, liberal, and even very rooted in hookup culture but Jane proves that is a blanket statement. In fact, the way Kat and Adena were, they seemed to refute that statement as well. So even with the establishment of rules, I think this needs to be dug into a bit deeper.

Being that Sutton decided to excommunicate Brooke, because she is toxic, it seems to have cut her off from Brooke’s contacts which never became her contacts. This causes quite a few problems because Sutton’s claim to fame is getting things done and for that monetary promotion she wants, likely she sees any failures as a threat to that. So she gets desperate for a Balenciaga bag. Even to the point of stalking Brooke and this leads to her being blown off a bit.

Luckily, Brooke’s friend, Tyler, he owes Oliver a favor for getting him his first job so everything is cool in the house of Scarlet. Well, outside of Oliver coming to realize that his star pupil is afraid to ask for help. So, to remind her that she isn’t alone, he has her repeat that they are a team and as a team, they are in control. Taking note the discovery that Sutton graduated high school in 2007, making her coming up on her 30s, it really puts into perspective why she freaked out so much before getting this job. Much less getting the job and not being paid much for it. 30 has sort of become the new 18 in that, at that point, it feels like you should be able to claim being an adult and, to a certain degree, have your s*** together.

However, with Sutton, especially with friends like Kat and Jane, the pressure is far more pressing. To the point, the idea of asking for help is probably daunting. You’re damn near 30 and have nothing to show for it beyond two close friendships and a shared apartment? It might seem like these assumed goals Sutton have are a bit much but, remember she has long felt like she was lagging behind and was ready to head back to central PA at one time. So she has to make it where Oliver gives, verbally, job wise, and monetarily, the type of validation that would mean she caught up to where she expected she’d be at.

Jane gets to meet Betsy, Sutton’s shotgun from high school, and it freaks her out. Why? Well, the main reason worth noting, that doesn’t make you wanna roll your eyes, is because Jane lived 5 miles away from where the Columbine massacre happened. It scared her so much as a kindergartner that she got rid of her light up sneakers just to become a harder target. Add in the school shoots and other acts or terrorism since then and you got someone very anti-gun.

Thing is, Sutton represents the American culture which sadly has the worse people as their advocates. Sutton is someone who grew up on guns because she is from central PA. Shooting skeet was a sport at school and was very normalized. On top of that, she was well trained on how to handle herself and now sees skeet as a hobby. Even Kat likes it when she gets to shoot.

However, Jane is stubborn to the point of it affecting her work. Which, I should note, inspires her one-track mind view because she decided to write an article about how much she loves her friend but not her gun. Yet, because she is so anti-gun, she can’t really wrap her mind around it. In fact, even when she breaks down how the gun gave her a feeling of control while her mom presented nothing but inconsistency, she remains in this mindset of being anti-gun and Sutton getting rid of Betsy.

Which, Sutton ends up doing since Jane always gets her way. Well, almost always. One small victory for those not part of the Jane fan club is she doesn’t get to sit at her old desk. Instead, she gets a broken chair and a place which doesn’t give her access to Alex and being able to snoop on Andrew – Jacqueline’s assistant. I really don’t want to be, or seem, like I hate Jane but she just is so hard to like. Maybe it is because she has strongly held opinions. Ones which, often times, deal with her claiming some kind of victimhood. Be it the white privilege thing or her aversion to guns. But it goes deeper than that. Her constantly being placated makes me cringe sometimes. Making the fact Ryan said she was wrong and Jacqueline establishing she is her boss first and mentor second like crisp water on a hot day.

For, as much as Jacqueline talked about how much Jane changed and how impressive it was, when Kat points out Jane has only been gone two months, my jaw dropped. Is Jacqueline’s writing staff so trash she felt she had to bring back Jane? Were they really not getting online hits or selling magazines without her? I know nearly everyone on this show has a soft spot for Jane, but sometimes it is a bit much.

Feelings about Jane aside, we need to meet Sutton’s mom. Heck, we need to see Sutton’s old friends and her life. I don’t know where they went to shoot skeet but I got so excited about maybe us, at last, meeting her mom I could have squealed like a pig. Alas, this was but a tease.

But, shout out to the show for not allowing those who enjoy guns to remain pictured as either a terrorist or red necks. By presenting a girl like Sutton, noting how much it is part of the culture, calling out Jane and people like her for their hypocrisy, I must admit I felt shocked. Mostly because, it seems so rare to hear conservative-leaning opinions like Sutton’s from a lead character. Especially one who we know love, and not by any means love to hate. Personally, she is my favorite character. Not even because of the gun thing but just because we see how hard she works. Things come easy for Jane, Kat is such a boss she always comes through, but Sutton struggles.

So even though she gave into Jane’s weak ass argument, which came off like such a power play since you know Jane makes more than Sutton and Sutton can’t go anywhere, at least she got new earrings out of it.