Wherever I Look
Recaps, Reviews, and So Much More
Home TV Series The Bold Type: Season 1/ Episode 9 “Before Tequila Sunrise” – Recap/ Review (with Spoilers)
TV Series

There are some twists and unexpected turns in The Bold Type’s season 1 penultimate episode. The kind which definitely will make the wait for season 2 difficult.

Does Alcohol Expose True Feelings or Just Leads You To Give Into Temptations?: Ryan, Sutton, Alex, Jane

After Alex confessing his feelings alongside Sutton breaking up with Richard, it leaves the two friends single. So when Trump causes many city blocks in New York to be shut down for his protection, those two, alongside Ryan, Jane, and Jacqueline, find themselves trapped in the building until the evening with nothing to do but talk and drink. Well, and hold a genderless clothing fashion show.

But really, what matters when it comes to this topic is Alex and Sutton have sex. Granted, sex after drinking, so who knows if Sutton regrets it the next morning, but either this will be a step forward or something the complicates their friendship. Only the season finale can reveal that.

As for Ryan and Jane? Well, Pinstripe fires Ryan, so he is unemployed and Jane gives her condolences. But due to everyone being stuck in the building, these two find themselves hanging out and it leads to the question of whether they could have worked things out? A question that lingers in the air making you wonder if Jane may give him another go?

I really want to get behind the idea of Salex, but it is difficult. If only because they made such good friends that I really don’t want to see that ruined now by drunken sex. Of which seems like it was a mistake, at least on Sutton’s part, and who knows how Alex feels about it. But I think the main issue here is I was kind of enjoying the idea of at least one of the friends single and could be happy about it. Much less I came to love Alex being that supportive guy friend without an ulterior motive. Something crushed when he confessed to Sutton, but still.

As for Jane and Ryan? I’ll admit it was cute as he showed he knows her beyond what makes her orgasm but I still just don’t see the appeal of them together. Well, besides him being the only guy we have seen Jane with. Which perhaps is the issue when it comes to Sutton. She clearly is still into Richard and so it makes Alex more so seem like a rebound, if not testing if she is ready and able to move on more than anything. Though, again, it isn’t like she made out and slept with Alex sober. Alcohol was an influence there.

Do I Stay or Should I Go?: Jane, Jacqueline 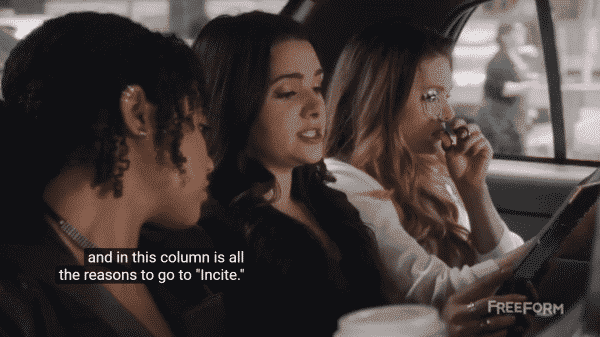 Incite wants answers but Jane isn’t sure where to go. However, with Jacqueline taking her pitch about genderless clothing and giving it to Alex, thus making Jane do the monthly quiz, things weren’t looking too good for Scarlet. Add on Victoria is pushing for an answer and shows the type of stuff Incite publishes, and you kind of see the pendulum swing towards Incite.

Especially as Jane’s Pro/Pro list is left in Jacqueline’s office, as her friends try to talk her into staying, and Jacqueline gives her a bit of a speech. One dealing with her hesitation with coming to Scarlet, which seemingly was a much more conservative magazine back in the day. Leading to her pushing Jane to do what scares the S*** out of her [note]I was so surprised S*** wasn’t bleeped on FreeForm. I guess it is no longer considered a curse word now?[/note].

So, with that said, Jane accepts the job at Incite. 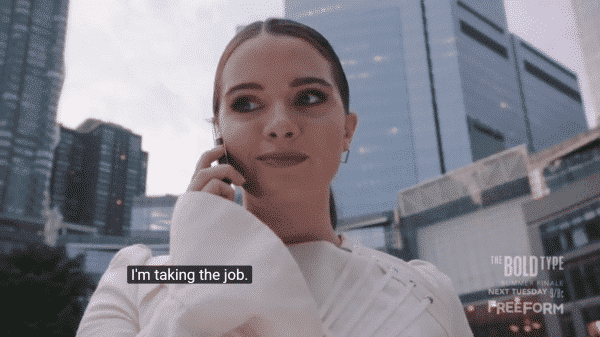 I still don’t believe she is leaving. It would be interesting to see her leave Scarlet, but I would imagine that would cost FreeForm more than they might be willing to invest. For while the show is a hit, one of the few I think FreeForm has had, in a while, that has had mainstream recognition, let’s just take note of how many talking heads there are at Scarlet. So for them to properly build her a life at Incite would damn near require enough people to set up a spin off. At least, if they want to maintain the idea Incite is a real publication. Albeit a small one, but still.

That aside, I’m curious as to when Jacqueline became Editor-In-Chief at Scarlet. If only because of her noting that the magazine was conservative before she got brought on helps explains some things about Jane. After all, Scarlet was the female figure in her life. So when it comes to her personality and maybe how she saw women, especially the kind she wanted to be, imagine how much a more conservative viewpoint may have molded her. Of which conservative here means more so traditional than it being synonymous with Republican.

Which is, of course, another thing. Not that I plan to touch on Trump’s politics here but I’m kind of surprised they didn’t have at least one person on the show excited about maybe seeing the president or something. I get NYC is a very liberal place but surely, within the Siemens building, there would have been one excited Republican rather than everyone rolling their eyes and making it seem they are upset by his presence beyond traffic issues.

Should I Stay or Should I Go?: Kat, Adena With Adena being held at customs and then set to be deported home, not to France but where she is actually from, Kat enlists her friends to do whatever is possible. However, it seems nothing can be done so last minute. Plus, with Adena noting she was coming to visit with a one-way ticket, things aren’t looking good. To the point, her work visa could also be in jeopardy.

But, to the tune of a $11,000 ticket, which is paid for with miles, Kat makes her way into the airport to spend the day and night with Adena. Leading them to have a date in the 1st class lounge, make out, and maybe have sex? I put a question mark there since while there were clothes taken off it doesn’t seem like they were somewhere private. Then again, the room was empty so maybe they just didn’t care.

That is, even though Kat, originally, was talking about going with Adena and just working remote. Especially since Kat hasn’t really gone anywhere while Adena, since 17, has discovered different pieces of herself in Europe, Asia, and Africa. She even has so many stamps they had to add pages. However, when it becomes time to go, Kat gets cold feet. Something Adena understands and doesn’t seem upset about. So the door might still be open to them continuing their relationship. 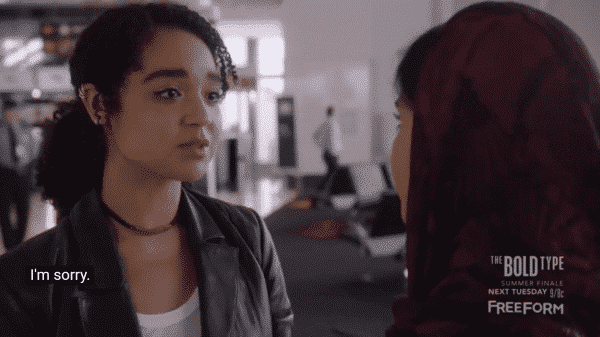 More than likely Nikohl Boosheri is coming back for season 2 (When that gets confirmed). She is noted as recurring wherever I look but honestly, with Adena and Kat’s relationship giving the show so much positive press, the idea of them letting her go is ludicrous. Plus, there was no ill will when Kat got cold feet in the last minute. So, unless they have her killed off, I fully expect us to see her again.

With that said, I would totally love an episode just dedicated to those two having a date and talking about their pasts. For just the life Adena paints for us within a few anecdotes really pushes me to want to know her. Not just because she is the sole Muslim QWOC I know of, but because she is also presented as so much more than that. She isn’t some token to tout around as FreeForm and the people behind the scenes claim DIVERSITY! She is a living and breathing person with a life that, at times, I care about more than most of the cast – sans Sutton and Jacqueline.

[…] you had something I didn’t have—stability. You know, I am very grateful for all my experiences, but I feel I’m ready to stay still for a minute. To build a home.