What The Bold Type presents is what FreeForm is known for mixed with what made ABC Family great. It has FreeForm’s obsessive need to feature modelesque attractive young people. However, it also contains ABC Family’s ideology of pushing past the superficial and present stories and characters its viewers will become loyal to.

Table of Contents show
1 The Introduction
1.1 Collected Quote(s)
2 Highlights
2.1 Chemistry
3 Each Character’s Motives Make Sense
3.1 Jacqueline
3.2 Adena: Muslim Representation and Queer Representation
3.3 No Petty Villain or Rival In Sight
4 On The Fence
4.1 Too Much Too Soon?
5 Overall: Positive (Watch This)

Scarlet Magazine. To some, it is just another women’s magazine about how to get the guy, makeup, and fashion. However, for some like Jane (Katie Stevens), it is the older sister you weren’t lucky to have. For Kat (Aisha Dee), it is a place which, thanks to their editor in chief Jacqueline (Melora Hardin), molds powerful and aggressive women. The type who, even while others say no, can do as men have long done and go after what they want anyway. Then be rewarded for it. Lastly, for Sutton (Meghann Fahy), it is a place which represents where she is at. Someone capable of casual sex yet perhaps wouldn’t mind something serious. For when your 9 to 5 is dull and lifeless, who doesn’t want something, or someone, fun to do afterwards?

[…] there’s a lot more inside of a woman than what you can see on the outside. 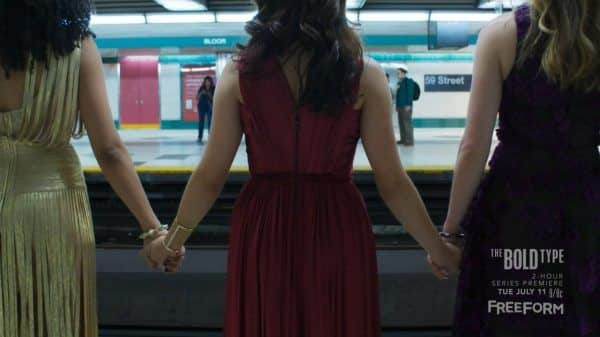 Shows with multiple female leads often seem to cast like a music company trying to make a profitable girl group. Meaning, they get girls who look good together, fit different checkboxes or quotas for marketing, and that’s it. With Kat, Jane, and Sutton though, there seems to be real chemistry between the three. Keeping with the analogy, it is like they were a group before FreeForm found them and this is them getting a major deal.

The reason I say that is, the writing is excellent. In this friendship dynamic, you can see each one inspires the other, has something the other one wants, and you can see this desire of sisterhood. Starting with Jane, she grew up in a family of men. 3 older brothers and a dad. So while Scarlet acted as a fictional big sister, Kat and Sutton get to be her real sisters. Which makes any drunk call or ask for a pep talk seem that more real. For she isn’t asking for the type a man like the ones in her family could give, but from women who are like her sisters. 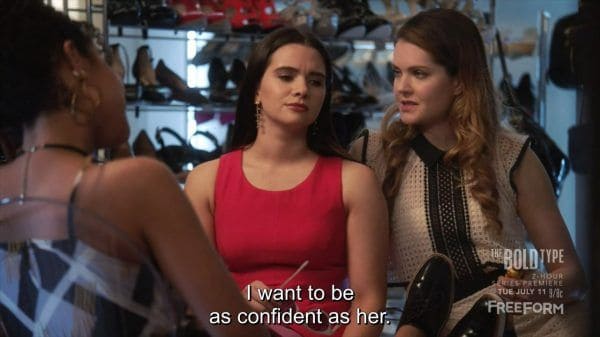 Then with Kat, she is like the Beyoncé of the group. They all started off as assistants but Kat got promoted within two years, it took Jane 4 and Sutton is still getting coffee. With that, you can see she is the one who seemingly has it together and can be inspirational. She became the social media manager and I bet she is no older than 25 – 27. Kat is the person who will go head to head with Sutton’s boss, in a very visible way, and comes out on top. Something which is awe-inspiring. Especially considering the pilot’s focus which is Kat going to bat for this Muslim lesbian artist named Adena (Nikohl Boosheri). Someone who I hope isn’t a one episode character.

Lastly, with Sutton, I feel like you get Kat’s assuredness in her work life, in her personal life. With that, she isn’t “The relationship expert” friend, but definitely the one who is a shoulder to cry on. The one who gives good pep talks, and may very well be the glue which holds the friends together. For while she may not be the most successful of the three professionally, arguably she knows herself better than Jane and can win over people more quickly than Kat. So while her strengths may not be apparent, they are there.

Why are they working at Scarlet? Should you care? Can you believe their motives match their personality and are rooted in some form of normalcy? The pilot says yes to all of the above. Why are you working at Scarlet? Jane, it was like an older sister to her; Kat, it not only mentors young women to fight for themselves but applauds it; Sutton, we aren’t sure yet. But that is a good thing. Everyone can’t be 100% sure of themselves. Someone has to be just paying bills, wanted to work somewhere fun, or something like that. 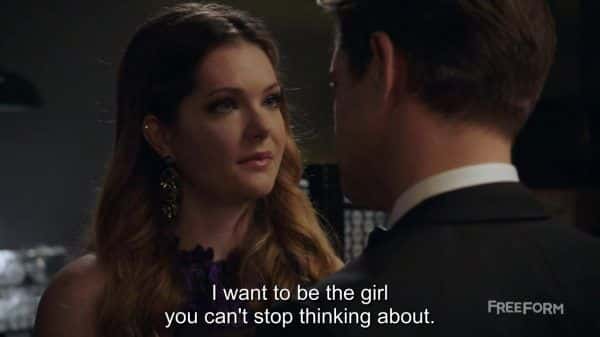 Sutton (Meghann Fahu) speaking to Richard (Sam Page) about changing the status of their relationship.

Now, as for why you should care? Well, it is because none of these girls fully seem like your generic NYC leads. Are any of them poor? I’d say no. Yet, there is a sense there might have been struggles. That none of them, well anyone on this show really, are pompous and don’t have a strong work ethic. Kat hunts down Adena when she originally rescinds the magazine from writing about her. Jane forces herself to mentally and emotionally confront her ex, Eric. Then with Sutton, she works late to prove herself and with Richard (Sam Page), a board member she was messing around with, she demands more. She was once fine being casual but now she wants something serious. Something that is not asked a handful of episodes, or seasons, in, but episode 1.

Thus giving us a handful of strong, courageous in their own unique way, women to invest in. All from different paths, at different stages of their career, yet still rooted in some form of normalcy. Even if it is something as little as Kat, outside of fancy events, not wearing heels like the other girls. 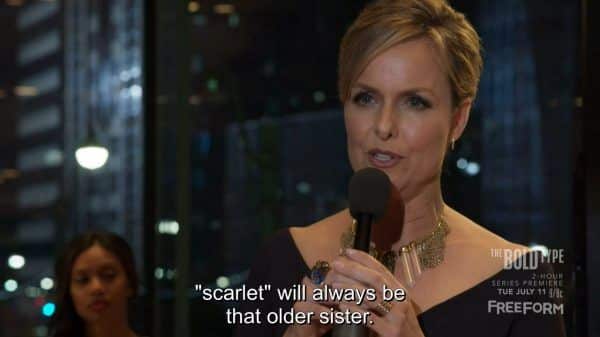 Melora Hardin as Jacqueline in The Bold Type.

She made me cry. I don’t know why, but Jacqueline’s speech toward the end of the episode made me cry. But, in general, I loved her because she wasn’t some Meryl Streep type, in The Devil Wears Prada, or nothing like that. She is the ideal boss. Someone who seems invested in her employees. Not to an almost over the top point, but if you need advice or direction, she is there for you. If you are willing to fight for what you believe in, she’ll hear you out and maybe let you have your way. There is no ego there, just what is best for the company and what is best for you.

To sum that all up, I’m envious of these girls having a boss like Jacqueline. 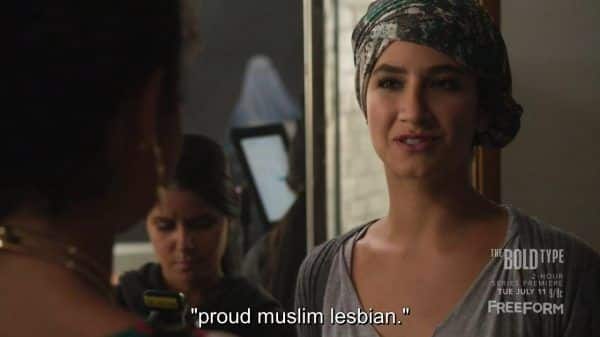 I’m not going to pretend this screen-cap may not be a little cringey.

I so hope Adena isn’t a one episode character. Not just because she is queer, but also Muslim. In times like this, we need a Cosby Show-esque introduction to what is treated as a foreign culture. For while there are many Muslim comedians and shows which deal with the Islamic faith, like Master of None, they are on more premium stations.

So to see Adena on a channel which is part of a basic cable package is so important. For it feels like a step towards, at the very least, tolerance. Acceptance may be a far shot, but baby steps. Plus, with her being a queer Muslim woman, much less a means which Kat may express some fluidity in her sexuality, it brings interest. She can not only bring Muslim culture but the complications of being an immigrant from a country where being a feminist woman, much less queer, is against the law. So with her ability to openly express herself without retribution, it will be interesting to see what she brings to The Bold Type. Assuming, again, fingers crossed, this wasn’t a one-episode stint.

No Petty Villain or Rival In Sight

While I can imagine Kat and Sutton’s boss Lauren (Emily Chang) butting heads, I don’t’ think it will be something petty. If anything, it might kind of be similar to Davis’ last show Chasing Life when it came to April and Raquel. Their ideas will both be for the benefit of the company, but their methods will be different and they might step on each other’s toes. However, I don’t see sabotage or high school petty nonsense in sight.

Too Much Too Soon?

Perhaps the only thing that gave me pause with this show is how many victories the girls got at the end. Adena is safe and no longer in holding, after trying to transport vibrators into her home country. Jane confronts Eric (?), writes an article, and it gets the approval of Jacqueline. Then with Sutton, she asks, or demands, from Richard a more monogamous and romantic relationship. Something she seemingly gets too.

I mean, minus Sutton getting a promotion, all issues presented get quickly wrapped up. Something I appreciate for none of them were worth dragging out. However, for Kat and Sutton, those seemed like issues that couldn’t be fixed in a matter of days. So I raised an eyebrow to them. 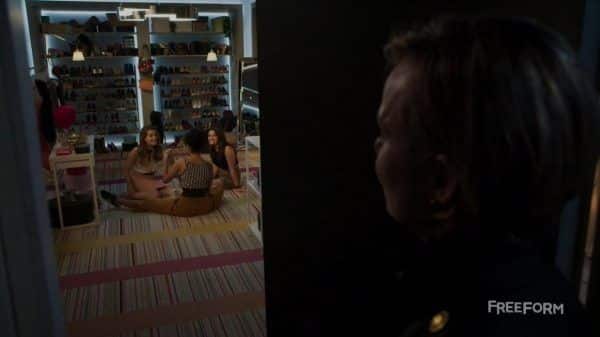 As the Disney Channel evolves, arguably FreeForm is as well. For while it may seem like just a name change, I’m sure the behind the scenes people changed as well. However, those in power haven’t seemed to found a good footing in keeping the best of ABC Family’s brand while crafting a new one. Yet, with The Bold Type, things may have changed.

What we get presented here may be argued as a go-between of The Carrie Diaries and Sex and the City. Yet, I think that would be discounting what this show actually is. What seemingly is being crafted here is what made Jane want to join Scarlet. The Bold Type presents three different women, with three different attitudes, who represent what may be considered the modern woman. Either the bold who work hard and are aggressive enough to meet their goals, get what they want, and maybe rub some people the wrong way, but don’t care. Maybe someone who may not be the most aggressive, but is a hard worker. Someone who knows how to do their job, but isn’t the type who necessarily can be boisterous and even combative. If not the third option which is someone who wants to be in the room, move up cause she proved herself hard working and loyal, but just hasn’t found that right opportunity?

The combination of all of the above is why I believe this is worth watching. There isn’t a guilty pleasure element, it isn’t relying on the beauty of its leads, but rather their talent. Their ability, from the lead to supporting cast mind you, to connect with the viewer. To make them invested in each story and want to see the highs and lows of these characters. For whether they end up being relatable, like a big sister, or just entertainment after a long day, the people behind The Bold Type show this production is worth it.