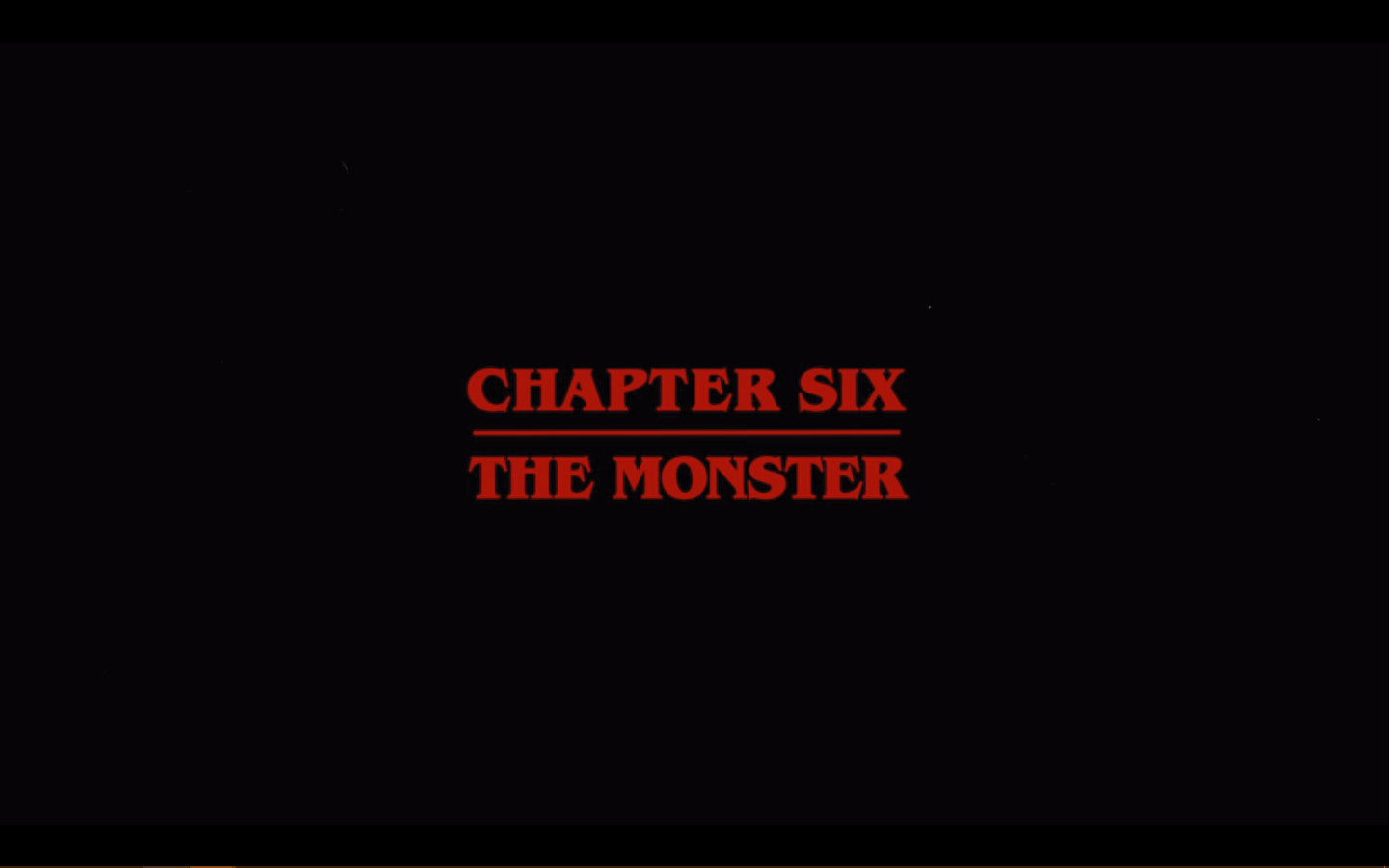 As Hopper and Joyce meet Terry Ives, Dustin and Mike go on a search for Eleven. Also, Jonathan and Nancy grow closer.

Table of Contents show
1 Previous Recap: Episode 5 “Chapter Five: The Flea and the Acrobat”
2 Love Makes a Boy do Foolish Things: Nancy, Jonathan, Steve
3 Jane: Hopper, Joyce, Terry, Becky
4 The Search for Eleven: Lucas, Mike, Dustin, Eleven
5 Other Noteworthy Facts & Moments
6 Question(s) Left Unanswered
7 Highlights
7.1 The Truth About Terry
7.2 You’re My Best Friend Too
8 Criticism
8.1 So Much For Lucas Having A Good Head On His Shoulders

Previous Recap: Episode 5 “Chapter Five: The Flea and the Acrobat”

After foolishly crawling her way into the Upside Down, nearly being caught by the monster, Jonathan helps Nancy navigate back to their dimension. Leading the two to become very close. Not to the point of dating or making out, but she does ask of him to spend the night so that she can feel safe. She doesn’t even think about calling Steve. Though, really, imagine what Steve would say?

Oh, speaking of Steve, he sees Jonathan in Nancy’s room and thus proceeds to let it be known she is a slut. He puts this on the movie theater marquee and then, when Nancy confronts him, he doesn’t back down at all. If only because she is unable to explain what happened and surely doesn’t want to tell the truth in front of Steve’s friends.

But things go from bad to worse when Steve refocuses his attention on Jonathan. Someone he berates and even brings up his little brother. Leading to, justly, Jonathan whooping that ass. Which leads to the cops coming and Jonathan, in the process of whooping that ass, hitting a cop. Something that seemingly won’t be taken as a heat of the moment event but a serious offense.

Hopper finds Terry and she is under the watchful eye of Becky, her assumed sister. Someone who claims that Terry has been pretty much out of commission for 5 years, for reasons never really gone into. All we know is that for most of the 12 years her daughter, Jane, has been missing, she has been fighting against the man on every front. That is despite people saying that she miscarried in the third trimester. Something which is notable only because Terry participated in Dr. Benner’s MK Ultra experiments while pregnant and in college.

However, as of now, it seems whatever happened 5 years ago, or whatever drugs Becky maybe giving Terry, has made her a borderline vegetable. One unable to respond to a thing.

As the “Staties,” as they are often called, hone in on Mr. Clarke and the AV club, and their trucks begin to track the kids’ whereabouts, Eleven is robbing supermarkets for Eggos. And while she returns to the forest to eat, Dustin and Mike are on a search for her as Lucas has decided to go solo when it comes to finding Will. For while Dustin pushes for a reconciliation, the problem is Lucas doesn’t want Eleven as part of the team. The reason? Well, Dustin figures he is jealous. Not because she is a girl but more so because she is taking up all of Mike’s time now.

Hence why the group is split but both end up getting what they want. Well, Lucas doesn’t find the gate but does come to realize the government is involved and sees all their surveillance vehicles. As for Mike and Dustin? Well, after Troy threatens to cut out Dustin’s teeth with a switchblade, if Mike doesn’t jump off a cliff, Eleven shows up after Mike decides to jump off to save Dustin. Leading her to break Troy’s arm for she is getting tired of him.

Leading to the episode’s big reveal: Thanks to Dr. Benner pushing her, Eleven is the reason the monster was able to get out. She is part of the reason the gates opened and she is under the impression she is the monster as well. Something Mike refutes but has no proof to dispel.

The Truth About Terry

I don’t know if Terry is in season 2 or not, or remember if Eleven and Terry meet, but I need to see it. I care more about that right now than Joyce and Will being reunited. Though, something will have to be done about Becky who I am so sure is keeping Terry drugged up to silence her. After all, we have seen what the people behind Hawkins are willing to do to keep things quiet.

You’re My Best Friend Too

The heart of Stranger Things is friendship. Not just for those missing but for those who are there too. Something shown as Dustin pretty much abdicates that Lucas is Mike’s best friend. Something which is used to explain why he is acting that way and it leads to Mike noting a person can have more than one best friend. An idea Dustin is all but ready to argue against until Mike notes he, Dustin, is his best friend too.

That smile from being told this was such a sweet moment. Perhaps because Dustin is kind of the outsider of the group. He is the pudgy one, he has the teeth thing, and while it isn’t clear if he was the last one to join the group or not, Dustin does make it seem he felt he wasn’t ranked highly in Mike’s life. So for that thought to be dispelled proves the strength of this group’s friendship.

Though I would be remiss to not mention how Dustin did try to reunite Lucas and Mike, despite how he could get more of Mike’s time if he didn’t.

So Much For Lucas Having A Good Head On His Shoulders

Lucas is officially an idiot. You know a girl who has telekinetic powers, has warned you the gate is not safe, yet you are willing to go on your own? There is no thought about, “Hey, if there is Eleven, who or what is One through Ten?” Never mind the idea that Eleven could show up, after she has gone missing, and do to you what you assume she might have done to Will. Because that couldn’t happen…