Star: There's something good waiting on the other side.

Everyone’s romantic relationships are hanging on by a tip of a finger and a grand gesture only fixes one. Can you guess which?

The Difference Between A Boy & A Man: Maurice, Noah, Megan

Maurice really does not want to let Megan go no matter how many times she says she can’t go back. Not just because of how he was as a husband but also Kayla too. Yet, with Noah getting caught up in a potential STD scandal, he is ready and willing to use that to show she is dealing with a boy who plays fast and loose. Thing is, Noah gets tested every three months and, apparently, he tries to be a smart ho. Also, we come to learn the photos were doctored so all this from Maurice just looks like him being petty.

Yet, with some thugs attacking Noah, while he is out with Megan, for not just paying up, it seems this situation is much more serious than it seems.

What’s the probability of Maurice trying to ruin Noah to get Megan back? Including having a random thug try to assault him to make it seem like he isn’t safe to be around? All I’m saying is, Maurice seems like a petty and borderline desperate man. Especially to recapture his former glory and surpass it in the music world. So, I doubt between Cassie’s drama and Noah being this little pip-squeak, he is going to let either one keep him from his goals. Even if it means using whatever means he needs to get to the top of Karma or Gravity Media, as well as have Megan back at his side.

So much goes down. First and foremost, with Carlotta gone, Maurice is never minding Take Three and pushing Noah since he is his artist. He has even brought a social media person, Chloe, on board to make Noah seem like a headliner. Leading to Star and the rest having to stir up their old drama in order to rewrite the narrative of whose the one to watch. However, in the process, the girls get reminded that none of their old beef really got handled. All that happened was it was set aside for the sake of Carlotta.

However, with her gone, the girls find themselves having to look out for one another and try to hold it together. Problem is, each one has had a past life that makes that difficult. For Star, it is trusting Jackson to not leave when things get hard, to rely on him, and allow him to support her the best way he can. Something which, since she didn’t grow up with that, it makes it hard for her to use “we” or “our” when it comes to them parenting their child. Yet, when he really does walk out on her, it forces her to, once again, take a step back and hold herself accountable. She has a good man who argues fair, doesn’t raise his voice much, and hasn’t raised a hand. It’s new, different, but it’s good. Good enough to lower the shield rather than just peek over it.

As for Alex? Well, you know her drama is in constant competition with Star’s. So if it isn’t panic attacks it is Derek being secretive about being an informant. Something that leads to him working closely with Mike-Mike, pushing drugs through Karma, and maybe his life being over soon. Why? Well, Mike-Mike catches Maria talking and he chokes her out when he realizes she is a cop. Now, whether he caught her talking about Derek not picking up her calls? Who knows. The only thing we know Derek got caught doing is making out with Maria way more than his cover needed. 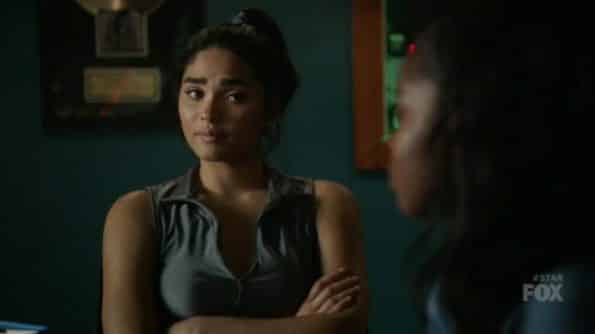 Come on, who came up with this cover that Maria had to be a bartender who Derek was using as a side piece? Considering the dude is pretty well-known locally, for his social justice activism, that just seemed stupid. They could have made her someone who was a community organizer or something right? Though, maybe that would be boring? I mean, let’s give writers credit real quick. Though their work gets scrutinized by massive amounts of people, and they probably get @ on social media for it, their job is hard. After all, you got to figure out a way to make a sure entertaining yet still keep it real.

Something that is rather easy for Star since you got all her childhood trauma to tap into. The hardest part of writing her and Jackson’s storyline, or anything for her really, is does this quip and clap back live up to the character? The rest you don’t have to worry about. Everything is set up.

With Alex, however, with her parents being played by two really famous people, as in Naomi Campbell and Lenny Kravitz (the multi-hyphenates), it’s not like the writers have access to them whenever to dig into her past. Unfortunately, Alex requires more creativity. Hence the panic attacks, car accidents, plane crashes, a boyfriend who ended up paralyzed, the affair with Noah, and so much to compensate for the fact they can’t get the commitment needed to touch on the root of her issues. For to really address Alex’s pain would mean her dad finally returning to the show after being gone since, what? Let’s say, midway through the first season?

So as much as Derek being secretive about being an informant makes me roll my eyes, I get there isn’t a huge amount that can be done for either right now. Plus, for most of the show, they’ve been built up to be this ideal – both as individuals and a couple. So in deconstructing their relationship, and the two as individuals, while it isn’t always a smooth road, it’s the best that can be done considering availability. Maybe also budget.

What You Won’t Do For Love: Xander, Cassie, Star, Miss Bruce

With Xander freaking out about cops and everything, he tries to reinforce Cassie’s loyalty by getting her a ring. On top of that, he promises to leave his wife and so much more. All which gets into Cassie’s head a bit before she gets a few wake-up calls. One in the form of Miss Bruce reminding Cassie that, back in the day, Xander was abusive. Then comes Star, who barely has been in the same room with Cassie, throwing her two cents in. But as for the straw which breaks the camel’s back? Well, it is Xander talking about Cassie taking the fall. With that, it may have finally clicked that if this marriage is real, it is more about business, protecting his that is, than love.

I think we’re approaching them overdoing it on making Cassie a sympathetic character. You won us over by making it clear she is all about family, is trying to follow Carlotta’s footsteps, and all that. Adding in she used to be beaten, maybe way back when she and Xander met when they were 15, it’s becoming a bit much. That and furthering the drama with him likely trying to throw her under the bus to save his own neck.

Yet, again, you have to take note of how difficult it is to balance out a show like this. For you can’t have everyone on a Star like journey. Though a lot of characters have similar trauma, it isn’t the same and some had more support to deal with things than others.

Cassie, for example, had Carlotta and Star had herself. Also, depending on how you look at it, neither Cassie nor Star had the time to know what it meant to be vulnerable, in a healthy way, growing up. Vulnerability, being open, what they would consider weak, would get them raped, mistreated, or killed. So for Cassie, you can understand why she wants to let Xander handle things. It means she can relax, not always be on, and while she can still be a boss b****, she can finally get the option for a vacation.

But with her turning herself in, and Carlotta seemingly returning, it appears Cassie is under constant refinement. Just to see what the right amount of attitude is, but also her willingness to sacrifice it all to show she can change. Hopefully without having to die to do so.