Smilf sends us on some kind of trippy Groundhog Day scenario which leaves you wondering what of it all was canon?

In the first round, as well as the rest, what starts off everything is Rafi wanting to see Larry and Larry missing his stuffed Panda. Something which is really important to him, and Bridgette, because that has been the only consistent thing in his young life. So, one of the first places she goes to find it is Ally’s. This leads to a very odd moment which, assuming these groundhog father’s days won’t carry over, I’m sure Bridgette will be glad to forget.

Remember Eliza’s dad and the complicated relationship they have? Well, add Regina, the perfect daughter to the mix. Someone who is skinny, tall, a brainiac, and clearly Phil’s favorite. Yet, despite how stressed Eliza is, Bridgette, over a stuffed panda, is junking up the apartment and even pushing to mess up Eliza’s room.

All of this leads to Eliza freaking out worse than she already was and Regina offering mushrooms. Now, for Regina, the mushrooms make her very chill. Like a weed smoker kind of chill, but without seeming spacey. When it comes to Bridgette and Eliza though? They go a little loopy. In fact, Eliza, after feeling shamed by her dad, strips down to her underwear, and has Bridgette do the same, and talks about how empowered she feels – how much she loves her body and her dad should too. It is all very weird.

But then Tutu shows up and Bridgette pretty much tells her off. Like, completely disowns her and then the segment ends like most of them do – with someone getting hit by a hearse. In parts 3 and 4, it seems, though Bridgette never lets us in to know if she remembers previous loops, she is learning something. Part 3 deals with Bridgette heading to Nelson’s to find Larry’s Panda and with Rafi there, things get volatile and Nelson tries to act as mediator. Problem is, Bridgette is still heated and Rafi is a sensitive guy. He tries to admit fault with the baptism thing and says he is trying to change, but Bridge isn’t listening. All she sees is a guy who can’t be held responsible to do things for their son and keeps messing up. And while Nelson tries to qualm things, it is way beyond what training session she did. These problems run deep.

But it doesn’t end there. Next thing you know, Bridgette’s aunt Mo is calling her because Tutu is drunk, at their parents’ gravesite and this is when things get good. For, in my mind, a lot of the stuff in part 1 was nonsense, part two gave us some insight into Eliza’s relationship with her family, and what really matters in part 3 is this graveyard scene. In it, we learn Tutu and Mo’s dad was a rapist who was in jail and Tutu’s mom was a nasty woman. The kind in which Tutu literally pisses on her grave because that is how horrible of a mom she is.

Then, to top it off, she has a sort of Frankie moment, from Better Things, in which she implies it is an endless cycle in their family. Not the whole rapist thing, not that. More so kids hating their mothers and likely pissing on their grave. Something she did to her mom, what she expects Bridge to do to her, and Larry to do to Bridge when she is dead. Yet, Bridgette makes a pledge to end that. First by noting she loves Larry and will show it to him, to the point it never comes to that. The second thing she does is forgive Tutu. An outright, blanket forgiveness for whatever she did or didn’t do. And then a hearse comes. 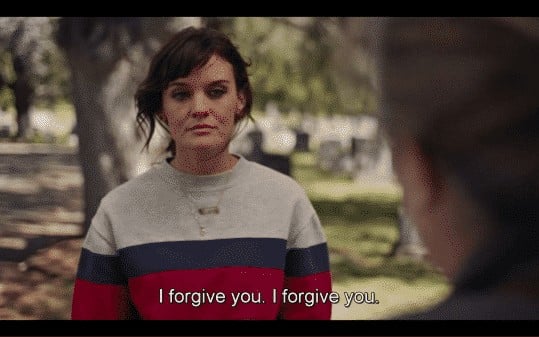 Leaving what, seemingly, will be the story which carries over into the future. One in which Bridgette sets aside her feeling about the baptism, Tutu’s need for the Father’s days for Mothers, and just lets them enjoy Larry, her company as well, and just be a family. Oh, and we learn Joe has been sitting on Panda this whole time.

One of the things which made this episode enjoyable, despite how low-key confusing it was, is that even if parts 1 to 3 shouldn’t be considered canon, they provided more insight into characters. Such as Eliza’s relationship with Phil, alongside establishing she has a successful sister. With that, it added layers to her insecurities and issues with her father since now we can see she is put in a competition with her sister she wants no parts of. And while she was high when she stripped down to her underwear, just an actress of Eliza’s size doing that is a very powerful statement.

Think about it! How many plus-sized actresses do you know who are not only are willing but asked within their programs to strip down like that? Especially not to present a joke, even if she was high, but to embrace their bodies and speak about loving themselves? I’m not saying it is revolutionary, but in a world which is just tiptoeing toward accepting bodies beyond that of Marilyn Monroe back in the day, you have to note Raven Goodwin as some form of a pioneer for the modern age. It was quite interesting to learn Tutu is maintaining a toxic relationship with her daughter as her mom did hers. Especially the idea that she fully expects Bridgette to piss on her grave since it is as much a family tradition as their Father Day for Mother’s. But, with them touching on how Tutu’s dad was a rapist and considering the history of sexual assault in the family, alongside the aforementioned issues, it helps you understand Tutu more.

She barely had the real-life example of how to be a mom which is perhaps why she struggles so much with the ever-sensitive Bridgette. Which, I know is no excuse for the type of verbal abuse which makes Bridgette sometimes cower when he mom talks. However, as shown in the example of Better Things, all it takes is one person to break the cycle and seemingly, Bridgette could be that person. For rather than hold in some form of hate against Tutu, there is this willingness to forgive her. Not so that she sometimes babysits Larry, gives her money, or anything like that. It is because just like she was a single mom, so now is Bridgette and she understands.

So, What Is The Truth?

But here is the thing which bothers me, with all these different points of view and storylines shown in the parts, is that just for our benefit? Like, I can imagine the Eliza storyline happening whether Bridgette was there or not, but the thing I’m really honing on is the Tutu story. With us being halfway through the season and considering what happens in part 4, the whole family coming together, it makes you wonder if we should consider part 3 the truth or something which could possibly happen but won’t?

Heck, should we even consider part 4 canon just because it was last? Could this whole episode just be one huge “What if?” or showing the very different ways Bridgette could have handled the situation? Yet, in truth, none of this happened? For while we see the same day repeat, Bridgette doesn’t acknowledge it so there comes the question of is this part of the show’s overall narrative or a filler episode which actually contains value?