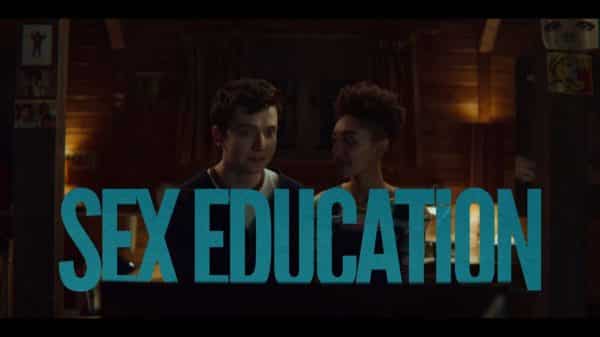 Ola’s relationship with Otis hits a very rocky path, as does Eric’s with Rahim. Add in Remi coming back, and it seems everyone’s relationship is threatened.

With Jackson struggling with understanding his lines and Vivian liking this guy on the quiz team named Dex, it is decided that they will help each other out. She will help him with becoming a far better actor, and Jackson will teach Vivian how to snag a guy.

Maureen, the principal’s husband, hasn’t been touched in 6 years and wants some advice on how to entice her husband so she speaks to Jean. Unfortunately for Maureen, while Jean’s advice is good, Michael seems unwilling to engage her since he thinks what she wants is more for the young – like those who are 23. Which could cause a problem down the road.

Jackson’s Juliet, in “Romeo and Juliet” is asexual and she discovers this by talking to Jean. Mind you, she went to Otis first, since he was the former go-to for everyone, but it seems more and more, between payment and lack of expertise, Otis is losing his formerly lucrative business. But, to make matters worse, Jean keeps hearing more and more about a “Sex kid,” and surely she will discover that is her son’s alias.

Eric is in a bit of a pickle. He has residual feelings for Adam, but Rahim is of the mindset of becoming exclusive. I mean, he literally asks Eric out and despite how beautiful Rahim is, and how they get along, never mind his ability to flirt and kiss Eric publicly, Eric needs time to think.

Erin is seemingly trying to be there for the long haul, but one of the big issues for Maeve is that she can’t trust her. In fact, Erin shows how unreliable she is by dropping off Elsie, Maeve’s three-year-old sister, on what is a rather big day for Maeve. Thus turning her world upside down a bit for if there is one thing Maeve is trying to do is break cycles. But, it is rather hard to be reliable and consistent when people around you are committed to being anything but.

Though, with that said, Erin getting a job in the episode is a step in the right direction. Now, whether or not that job is what she says it was is another story.

Things have come to the point where Ola doesn’t want Maeve and Otis being friends. Her women’s intuition is blinking, likely because Maeve confesses to Otis and interrupts when Ola and Otis are about to have sex. But, whether or not Otis will truly break things off with Maeve is hard to say. For with her confessing to him and him noting he did like her, while it does make things weird, they have found a rhythm outside of current or past romantic feelings.

But, then again, with the clinic likely to go out of business thanks to Jean, who knows what may happen?

Remi, Jean’s ex and Otis’ dad, arrives unannounced and finds himself competing with Jakob for Jean – in a passive-aggressive way. This leads to the reveal that Jean is content, not necessarily happy, with Jakob, and that there are still residual feelings for Remi. The kind which almost leads to them having sex. But, lest we forget, Remi is notoriously unreliable and likes to steal Jean’s work. So, in the long run, he may end up burning her by taking all the research she has gathered from talking to teens at Otis’ school.

You really do get to feel for Maureen and applaud “Sex Education” for not just focusing solely on teen sex but also that of adults. But, with Maureen, things are a bit more complicated. If only due to her and Michael’s situation leaning more towards the comedic side, thus pushing you to wonder if it may ever be really addressed how a couple ends up with a 6-year drought and how to get out of it?

The Fall of the Sex Clinic

The sex clinic has been a bit of a crutch when it comes to Maeve and Otis’ relationship. It is was linked them and pushed them to interact. So without it, that would mean true quality time together and money not being involved. Thus really testing their friendship, especially considering Ola’s ultimatum.

Eric In A Love Triangle

With how miserably single Eric once was, having this French guy who wants him and Adam just makes you so joyful for him. And while we generally don’t like love triangles, since they come off as lazy writing, how can you not make an exception for Eric?

There is a serious need to shout out “Sex Education” for its treatment and use of dark-skinned actors. Generally speaking, the color palette we see is of Olivia or Ola, and if there is someone that is like Jackson, Jackson’s mum, Eric, or Vivian, they are the only one. But, on this show, we have three actors who have storylines and lives. On top of that, we have Vivian and Jackson working together, supporting one another, and there is just something so beautiful in that.

But if I may also add, I love how Vivian, while teased, isn’t repeatedly hit with joke after joke. She is allowed to be a girl who isn’t necessarily adept to love, sex, and romance, just like everyone else. Making it so this show truly goes beyond being diverse and rather is inclusive.