The season finale is filled with apologies and one or two surprises. One which some may say was a long time coming (no pun intended).

Thanks to Sean, who may have run off again, Maeve is put in the position to either let Mr. Groff call the cops on him or take ownership of his drug dealing. For with Mr. Groff assuming that is what Otis and Maeve have been up to, she has no choice. Leading to Ruby, even after what Maeve helped her with, digging in her claws but finally, FINALLY, Aimee doesn’t just stand, watch, and mouth how sorry she is. Instead, she finally leaves that clique for good. 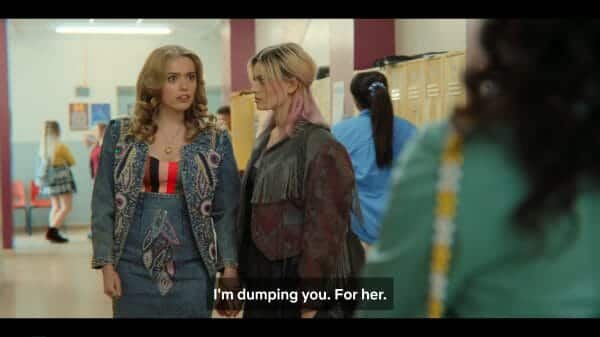 Aimee: I’m dumping you for her.

While, with the end of her relationship with Otis, Aimee’s return is right on schedule, it is hard not to question why Aimee didn’t get called out in a serious manner? Let’s make the assumption, like most shows, these two were close, but while Maeve decided to be a loner, an individual, Aimee wanted to be popular. In my mind, considering Maeve always talks about ruining things, the fact she never went off on Aimee seems out of character.

But, then again, Maeve saying how she ruins everything has mostly been her internalizing the bad behavior of others. Whether it is her mom being who she is, dad, brother, etc., none of those unfortunate scenarios were Maeve’s fault. From what we’ve seen, she is probably the most understanding person on the show and has been more than willing to, even with people like Ruby, set aside past experiences with someone if they are in need.

I mean, think about it, her going off on Otis was justified and considering what she says to Jackson, later on, again, considering what she is going through, it makes sense. After all, she said she didn’t want a boyfriend for a reason, and it was beyond worries about them leaving. If anything, it is because, on top of leaving, people like using her, taking her time and energy, without giving much back. Yet, like her brother, Aimee too in a way, expecting things to quickly and easily be smoothed over with a simple apology.

We Shouldn’t, But We Should: Jean, Jakob, Adam, Eric, Otis

Jean and Otis have a real heart to heart. One which deals with her relying too much on their relationship and using him as a bit of a crutch. Hence her becoming much more invasive than she has ever been for with him gaining autonomy, it forced her to think about her own life. A topic she has avoided for so long that she tried to use her son’s difficulties to channel a new book. One which is discussed, especially Otis’ issues with it, but with a publisher interested in it, it is hard to say if Jean may shelve it for the sake of Otis. For if she is going to focus on her own life, she needs to get back something she lost in the divorce. One of those things being, her voice.

Something that she uses when it comes to Jakob for when I say her voice I don’t just mean her ability to in written word and get the validation of a publisher. Losing her voice also came in the form of her expressing her feelings to strangers. For Otis is her son, she has known him all his life, and lives with him. Reconciling with him is as much about healing their relationship as keeping the peace. However, with Jakob? That is about finding the ability to be vulnerable with another person, in love, and express that love outside of lust. Something he gives her room to do and despite their children being into one another, it seems neither is willing to set aside their feelings.

Speaking of setting aside feelings, Adam finally reveals his to Eric. Well, at least by them making out and Adam going down on Eric, he expresses some sort of feeling. Surface level, it could be Adam coming out and showing that he bullied Eric all this time because he liked him. But, this could also be seen as a desperate maneuver. Either way, with Mr. Groff sending Adam to military school, we may not get an answer to whether this is real or not, from Adam, anytime soon.

Let me explain that last paragraph, I don’t know if Adam perhaps has reached the point of being so lonely that he’d be willing to be with Eric, do what pleases him, just to say he has someone in his corner. Not to downplay him maybe being authentically bi or gay, but the situation with Eric seems more out of desperation for human contact and intimacy than anything else. Especially with seeing how Eric and Eric’s dad interacted and wanting some form of that for himself. So a small part of me wonders if, after Eric gives Adam a bit of an ego boost and the validation he craved, he might leave Eric behind. Otis: Thank you for saying sorry.

Switching to Jean, what I like about her is what I like about most of the more eccentric characters, like Lily. When you take away the comedic element of their personalities, and show the hurt, the need or fear of not being normal, you get their truth. One which, despite how comfortable they seem in their skin, they don’t like facing and can barely bring themselves to vocalizing to another human being. Yet, to move forward, move on, you can see they can’t maintain this seductive façade while keeping someone from getting close enough to look them in the eyes.

It’s almost as if they fear once someone sees the truth behind the magic, they, Lily and Jean, don’t think they’ll have the same value. And to beef up how Lily plays into this, clearly Lily is weird, a Type-A, etc. However, recognize that she doesn’t have friends and her desire to have sex is very direct. But, when the time comes, the symptom known as vaginismus impedes her. What happens with Lily’s body is similar to what Jean has done with her emotions. They are opposites yet the same. Both possessing this sort of mysterious allure yet having an issue which keeps them from having what they truly want.

With covering for her brother comes the possibility of getting expelled, and that puts a huge load on Maeve’s plate. One which Jackson, trying to be somewhat of a good boyfriend, tries to take on. Problem is, Maeve is starting to realize, beyond the leaving thing, why she hasn’t wanted a boyfriend. Jackson is draining in ways Maeve doesn’t have time for. He is needy, manipulative, and until he tried to bribe Mr. Groff to keep Maeve in school, with swimming in the county finals, he has been selfish. She has enough issues with a mom who is God knows where and a brother who is in and out of her life. Adding Jackson, with his juvenile problems, compared to hers, is a bit much.

Luckily, as she waits for Mr. Groff’s decision, which doesn’t seem to be positive, Aimee is there, and Otis delivers a proper apology. The kind which, after avoiding her feelings, suppressing them, inspires her to talk to Otis and maybe see what could happen. But, no sooner does she get to Otis’ house does she see him and Ola making out after his weak ass apology to her. For Maeve, someone reasonably new in Otis’ life, he stole an award, wrote a letter, and made a real effort. With Eric, he gave a half-ass apology and danced with him publicly. Ola? He put her in a position where she had to listen, and his apology was putting a bunch of cat food on the counter to downplay him calling her a goat and trying to clean it up by reverting to calling her a house cat. I don’t know Ola’s background, outside of her mom being dead, but I feel like Otis should have needed to do more to get back in her good graces. Never mind walk home with the boy and make out with him.

But, you know, as seen with Elite, I don’t get the back and forth of teenagers. Which does lead the need to wonder what may happen with Maeve now? Will she get expelled, saved by the skin of her teeth, and what will come of her relationship with Otis after? Will things be flipped and she’ll be on the outside looking in? Maybe, if she wants to be evil, she’ll plant seeds of doubt in Ola’s head? Maeve doesn’t seem like that kind of girl, but we also haven’t seen her but with one other guy, and she was with him because he was persistent more than anything.

Leading to this interesting thought that @AlannaBennett brought up: Ola being bi. As seen with Adam, bisexuality isn’t a rare gem on this show, as are people under the LGBTQIA umbrella (though we have no trans characters). But, one thing that I thought was interesting about Ola’s tweet was Ola being seen as queer and radiating that energy.

One of the things that were interesting about Lily’s initial take of Eric was not coinciding his look with being queer. So I wonder, with Ola nodding to some stereotypical queer identifiers, will this be a case of showing a woman who is mistaken as queer or addressing the complexities of bi-sexuality?

Jean and Otis’ conversation that allowed Jean to open up to Jakob. - 90%

Just as Adam gets a storyline, and Eric a love interest, Adam is sent to military school. - 75%

As long as Maeve is in the picture, you know you can’t get comfortable in the idea of Ola and Otis being a thing. - 79%

What can be done with Jackson and Aimee at this point? - 70%

The season finale is filled with apologies and one or two surprises. One which some may say was a long time coming (no pun intended).