As Eric continues to process what’s going on in his life, Maeve gets a surprise. Also, we learn why Otis has issues with sex.

What Kind of Man Are You?: Eric, Anwar, Eric’s Dad

We get to meet Eric’s entire family this episode, mom included, but things remain mostly focused on his relationship with his dad. Specifically in his dad saying one thing which gets Eric’s wheels turning. Example: With his dad telling him he needs to be tough, he does so in the way he thinks his dad means – by being a bit distant, hard, and a bit aggressive. In choosing this route, he goes off on the music teacher, bumps into people rudely, and also punches Anwar after a comment he made.

In doing that, punching Anwar, a few exciting things happen. One, Eric gets suspended, and we, unfortunately, don’t see his mother’s, or sisters’ reaction to that. Two, we learn Anwar wasn’t out to his parents, but now is. Then there is the third thing in which Anwar makes it seem that Eric wouldn’t go for pretty boys like him. Which pushes the need to question if, similarly to Maeve and Otis, could there be a crush neither party thinks would work? 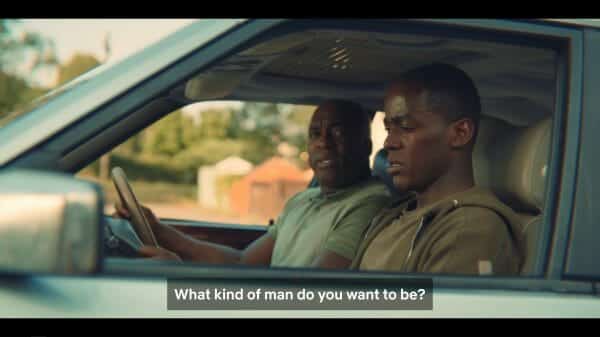 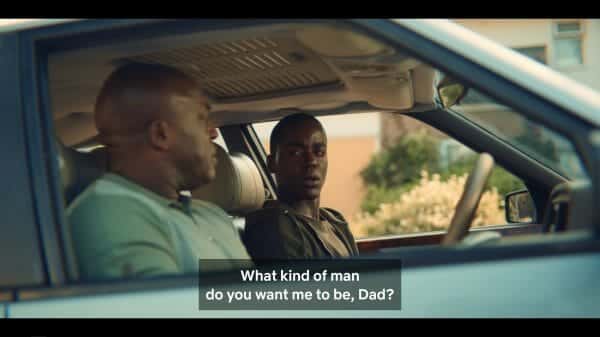 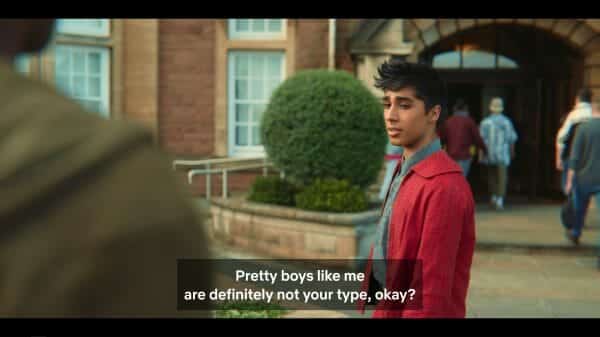 Can we begin with the Anwar thing? I’m curious as to whether he might have feelings for Eric and whether it is because he now sees Eric’s masculine side or maybe he even liked him when he was more femme but seeing Eric switch up is a turn on. If not the idea that, considering how he punched him, maybe he thinks he could be safe with Eric? Take note: I tend to romanticize things so I could be way off. However, if Otis can begin developing into someone who has multiple girls interested in him, surely Eric can get one guy right? Be it Anwar or someone else.

Switching to Eric and his dad, I really do love how complicated their relationship is. Clearly, his dad is somewhere between being uncomfortable with his son’s sexuality to being ignorant, but he doesn’t express his ignorance in a homophobic way. He, instead, is treading lightly as if he knows the suicide rate is high for those under the rainbow but isn’t sure what to say as a parent who finds his son foreign. Leading to moments that push Eric not understanding his father is trying his best, but just watching his father try is crafting such a good storyline for him and Eric.

The reason being, at least regarding my viewing, we haven’t gotten a lot of middle ground parents of LGBTIA kids. Take note of One Day At A Time and how Elena coming out went. Seeing a parent push aside whatever they were taught, their ignorance, bias, what have you, and come to recognize what you want is for your kid to be happy, we don’t see that enough. For while tolerance is becoming the norm, acceptance and love still feels very far off.

You Gotta Find The Right One Before You Take A Big Leap: Remi, Jean, Jakob, Otis, Ola, Lily

However, don’t threat, as Jakob and Jean get closer, but not close enough for Jean to be willing to date – just yet – Ola also makes a move on Otis. She doesn’t make a sexual one or anything like that. All she does is give her number, and Otis ends up texting her later on.

Ola: Well, I think you’re funny, and I wanna go out with you.

Hold up, when we first learned Jean had nightly lovers, wasn’t the first guy a patient? Is Jean doing exactly what Remi did to her? Use patients to deal with sexual desires? Oh, I see that this show is trying to develop the idea that even “experts” can barely handle what they often consult about. You’d think it would just be Otis but Jean, thanks to Remi cheating, has found herself hit by some type of arrested development. Yet, considering how drastically different Jakob is from Remi, I do hope she gives him a chance. Hopefully them making out, maybe doing a little something-something, didn’t get him out of her system.

Switching to Otis’ quest, is it wrong I feel bad for Lily more than him? Yeah, he is dealing with early childhood trauma, but Lily is in that awful position of feeling ready for sex and that kind of intimacy, but can’t find anyone. And to make the situation worse, it isn’t like she is shy and waiting for someone to ask her out, and then they build up to having sex. No, Lily is upfront and is getting no play. You can feel the almost seething frustration when Otis brings her just to the brink of finally having sex. But, it is her noting she didn’t have high hopes about things going her way which is the kicker here. Though, at least she got to meet Jean and Jakob who seemed interested in her sex comic.

Leaving the need to bring up Ola. I’m honestly surprised there isn’t a Stan and Wendy (from South Park

) dynamic between these two. Yet it is as Otis conveyed to Lily, it isn’t necessarily the idea of intimacy which causes a panic attack, it’s rushing into it. So Ola becoming his girlfriend, getting to know him, tease him, and work their way towards having sex might be what Otis needs.

Mind you, this isn’t to say he will use Ola to develop himself, but you do have to recognize how often people better themselves for the sake of attracting or keeping, other people. So Ola’s interest which isn’t aggressive like Lily, nor passive like Maeve, might be the kick in the pants Otis needs. That is, the kick he needs to talk to one of Jean’s colleagues and deal with his issues.

Maeve is in a bit of an odd place right now. She has a best friend in Otis who, unlike Aimee, doesn’t treat their friendship as a secret and does care about her. Alongside him, she has Jackson, who is putting in the effort to be a good boyfriend. Then, after four months, Sean, her older brother, comes back and is trying to make up for lost time. Well, he is on his best behavior at first but is slowly slipping back to how he used to be. Though, I wouldn’t say who he was before necessarily was terrible towards Maeve.

But, getting to the point, as always, when things are going too well with Maeve, there is the question of how could they mess up and will she be the reason why? For Ms. Sands is already on her case about writing Adam’s essay, which won the competition, and Otis was a little too. Which, while Ms. Sands was kind of annoying, Otis recognizing her work without her telling him was endearing. For while Jackson has put in an effort, it doesn’t compare to someone who gets you effortlessly.

Yet, enjoying the glory while it lasts is what she and Adam plan to do. For with that essay winning the competition, Adam gets the praise and admiration which he has seen others get from his family, but not him. So even if he is a fraud, he wants to have this moment. Heck, even his dad wants to enjoy it just so he has something to be proud of his son about.

You have to wonder, considering Maeve smelling Otis’ jumper, similar to how Jean smelled Jakob’s hair, does she have feelings for him? I feel like I’ve asked this before, but it does increasingly seem that between his hesitation and her worrying them dating would ruin everything, that is what is holding the two back. Well, Jackson as well, since he is a good guy, but breaking up with him might be hard for Maeve but doable. Though, with Ola entering the picture, you have to wonder if maybe she’ll set her feelings aside and try to help Otis be the best boyfriend he can be. You know, taking the mature route of being happy that your crush is in love, even if they aren’t in love with you.

Switching over to Adam, first I got to say that he and Lily seem like they may end up on a collision course. That random thought aside, I feel like, after keeping him around, but not doing much with him, this could be what he needs. For at this point, you have to recognize this show pushes the idea of universal struggles which aren’t limited to age, gender, or sexuality. With Adam, like Eric, his dad doesn’t get him, and that causes a strain in their relationship. Also, like Maeve in a way, before Otis and Jackson came into her life, Adam is a bit isolated. Yes, he has his mom who is okay, but as for a go to talk about his problems? After Aimee left his life, no one took up that space.

Which isn’t to say I’m excusing him formerly bullying Eric as a means to release his frustration with life. Mostly, I’m just hoping that this change in how he is treated may inspire him to do better. Maybe not on Maeve’s level, or his sister’s, but at least put some effort into his life and not just coast.

Making Steve a rather noteworthy guy since he pushes to ask what she is into. On top of that, when she figures it out, with detail, he is as down for her pleasure as she is with his. That’s the kind of reciprocity we need to see more often. Not just the pants and moans, with the assumption both are satisfied, but some preliminary conversation and checking in that isn’t rooted in ego. That is, the guy asking if the girl came like it is a video game achievement and they’re waiting to see the trophy notification pop up.

It seems Otis helping Jackson win Maeve isn’t going to be an issue. - 90%

At this point, I don’t think a Maeve, Jackson, and Otis love triangle exists at all. - 89%

Aimee learning what her clitoris is for. - 88%

Ola giving Otis her number and it being clear Jakob likes Jean. - 91%

The audience getting to know why Otis has issues with sex and why Jean has a difficult time to allow herself to date. - 87%

Otis and Jean having some family time watching Zorro. - 86%

The complicated relationship Eric’s dad and Eric have going. - 92%

This feeling that the shoe could drop for any character at any time. - 79%

Anwar coming out to his parents, but it still feeling like not much will be done with the character. - 70%

I enjoyed your recap. The one issue I had was you calling “The Princess Bride” Zorro. Yikes!