I Be Knowin’ – Recap/ Review (with Spoilers) I Be Knowin’ is a “Best Of” collection for fans of Amanda Seales, but that is what makes this special the perfect entry point for when you introduce her to people.

I Be Knowin’ Plot Summary

After decades of working as an actress, seen in shows like Insecure and those self-produced, gaining a huge social network following, and creating the must-see show Smart, Funny, and Black, Amanda Seales exhibits her talent for stand-up. The multi-hyphenate introduces you to her coined terms, to describe the aggravation white people around the world causes, caucasity, gets real about dating and having sex with men, as well as dealing with white women.

Mind you, this is never a special which generalizes all men, white people, etc. It’s just a few in particular, who know who they are, that had to be spoken to. For that is all Seales is trying to do, relate to her audience, as she does on Instagram and Twitter, and do as Black folks have done for eons: Find ways to laugh to keep from crying. Because sometimes, as her song goes, and you may relate, “N*****s got me f***ed up.”

When you grown, you don’t make mistakes, you make choices.

Even If You Heard The Joke Before, It’s Still Funny

Here is the dangerous thing about specials nowadays, if you see that person live, follow them on social media, by the time the special comes around, you likely know all the jokes. Case in point, I saw Seales at Caroline’s, over a year ago, saw her stand up routine on Seth Meyers, and follow her on Instagram and Twitter. This combination made it so very few jokes seemed new.

However, what you have to appreciate about Seales is her delivery and storytelling makes it so the familiarity of the joke doesn’t make any less funny. For her talking about catcalling, with the Jamaican dude calling her “Sweetness,” it is the same joke, done similarly, as the video linked below. But, there is something about Seales energy, whether hearing the joke in person, or just her changing her outfit and slight alterations, that keeps the joke funny.

She Is A Necessary & Unique Voice

Not to put down other female comics, or Black female comics, but Seales is perhaps one of the few you can’t really box. Yes, she is speaking from the perspective of a Black woman, a feminist, and someone with a Masters from Columbia University – but she shows how those things both conflict and compliment one another. There is a joke about plane etiquette which leads to certain aspects of her being a Black woman, specifically a trans thug, conflicting with the assumption that would come from hearing someone had a Master’s degree.

Also, while a feminist, she isn’t above noting she had some ho-ish ways in the past. But now she is a self-proclaimed responsible hoe. A feminist who recognizes the power of the penis but also the power of her vagina. One who recognizes she is multifaceted and can conjure up the spirit of Suge Knight or a gay man named LaTravious if she needs to.

And the importance of Seales being this diverse and being able to tap into the ratchet, the cultured, and academic, is because it shows you how multifaceted Blackness has become. Especially when it is allowed to flourish, is unashamed, and is comfortable in every aspect of what it means to be Black.

Making the confidence, pizzazz, and eccentric nature of Seales something you have to question: Why has the world been sleeping on her?

Arguably, She Is A Better Storyteller Than Joke Teller

I’m going to try to not be a fan for a moment (one who actually pays for things she puts out). If we are honest, Seales is not like other comics who are about hitting you with one joke after another like they are in a boxing match and strictly aiming for your gut. Seales is more like that co-worker who is essential to you not quitting your job. The one who isn’t trying to be funny, but just is – which is the best way to describe her comedy.

Heck, as noted on her recent trip to The Breakfast Club, she doesn’t write down jokes. So, when watching, take note that while there are setups, punchlines, and callbacks, it is more about her talking about stuff that has happened, and finding the funny. Seales is not the kind of comic flying all over the stage, making a fool of themselves, like she is a jester for your entertainment. 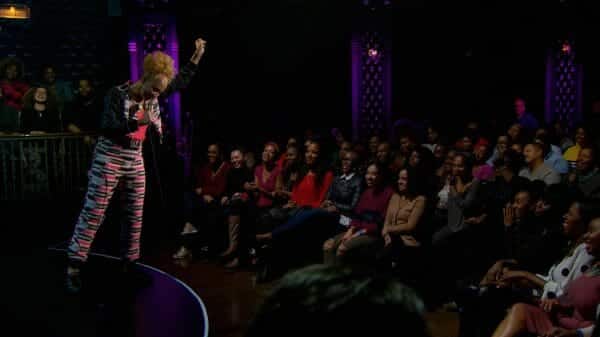 To know of Amanda Seales is a blessing, and to follow her on Instagram, Twitter, or listen to her Podcast, is to remember a time when comedians said things which made you think. Not in the form of questioning why they think something is funny, but when they said something so casually, and you had to pause and take note of what they said. Something which is seen in I Be Knowin’ as Seales brings up learning about the Black National Anthem, and noting she didn’t learn it until 10th grade; how passive-aggressive has somehow become what people consider professionalism, and so much more.

Hence the positive label. I Be Knowin’ truly is just a taste. It is meant to be an entry point for the curious or those recommended to check out Seales, and for those who knew her, it is a celebration. Seales herself calls it her wedding but it is more like seeing her getting an honorary doctorate, a Presidential Medal, or other awards more so based on recognition of greatness than popularity. For as any special should, it leave an exclamation point on where Seales is at this point of her life as she closes one chapter and begins a new one. A chapter hopefully more will appreciate getting to witness page by page.

Even If You Heard The Joke Before, It’s Still Funny - 90%

Arguably, She Is A Better Storyteller Than Joke Teller - 85%

I Be Knowin’ truly is just a taste. It is meant to be an entry point for the curious or those recommended to check out Seales, and for those who knew her, it is a celebration. Seales herself calls it her wedding but it is more like seeing her getting an honorary doctorate, a Presidential Medal, or other awards more so based on recognition of greatness than popularity. For as any special should, it leave an exclamation point on where Seales is at this point of her life as she closes one chapter and begins a new one. A chapter hopefully more will appreciate getting to witness page by page.