One Show Fits All gives you everything and more. You’ll laugh, you’ll cry, hear wonderfully told stories, and will seriously be tempted to see Gabriel Iglesias live.

One Show Fits All Plot Summary

From Frankie being a 19-year-old deadbeat to meeting Snoop Dogg, sneaking into Chris Rock’s dressing room, and contemplating homosexuality, Fluffy has a lot to say. But, with it being a nearly 20-year career, there is also a lot of reflection. Take, for instance, him bringing his first two fans to the venue to celebrate his latest special. Oh! What about taking his mom, Esther, to a show, and the last picture he has of her is with her brimming because she is next to Vicente Fernandez!

Overall, One Show Fits All is about Gabriel Iglesias reaching a point where it is time to reflect, be comfortable enough to bring up old jokes, yet also appreciate the joke being so well known the audience doesn’t need him to finish it.

While many comedians do accents, make random sound effects, and are a bit zany, Iglesias is comparable to Robin Williams with the way he does it. For whether he is doing an Australian accent, imitating Snoop Dogg or Chris Rock, you can both see the effort and also the exaggeration for the sake of making the story funny vs. trying to make an outright joke. But what perhaps Iglesias’ signature are the million and one sound effects which almost lead you to question why wasn’t he casts as the Genie in Aladdin? For whether we’re talking about the sounds of a car, things falling, or a slew of other noises he makes, it shows why there are so many animated movies in his filmography.

There are a few kinds of comedians. The ones we mostly see are storytellers, but this can be handled in two different ways. Sometimes, the story is all about building up to a joke, but what you have to love about Iglesias is that there are jokes just sprinkled throughout. This is especially useful for, unlike most specials, this is more than an hour. It’s an hour and a half of comedy, and there aren’t too many pauses throughout.

This is something you have to applaud Iglesias for since he weaves in and out of stories and transitions seamlessly from talking about Frankie to celebrity encounters, talking about his driver Dave, and then talking about his mother. And there is a need to mention his mom for Iglesias does something not a lot of comics do, or might be capable of. Most comedy shows either point out to the weirdness of the world or are self-deprecating. What Iglesias does with a notable portion of his special, before the end, is thank his people, those who are in the venue, and talks about his mom.

Now, are there a few jokes put in there? Of course. However, it is about his mom meeting Vicente Fernandez, being the happiest he has ever seen her, which will get you teary-eyed. And considering, as he notes in the beginning, he was feeling comfortable, it seemed like he wasn’t doing crowd work but honestly was ready and willing to be raw beyond what you expect from comedians. Thus giving you a little bit of everything from quality jokes, relatable stories, and a tear-jerking moment to engage multiple parts of your brain. 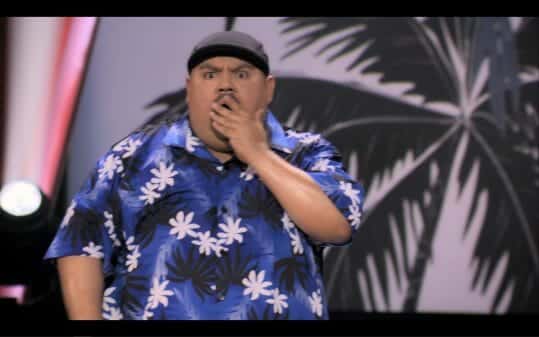 This is the 7th special of Iglesias’ and it is clear that he is in his element. He knows what the crowd desires but, with touching upon his mom, you can also see him working new territory. The kind which leads you to wonder if he’d consider, in a similar fashion to John Leguizamo, using his storytelling abilities and being willing to deal with the darker stuff. To bring more emotions and still find the funny, but also not always take that way out and sometimes let things be as they are.

Hence the positive label. While we get a lot of what we’re familiar with when it comes to One Show Fits All, there is also this sense that he can do other things and he hasn’t reached a dead end. Making it so you ultimately are happy with what is given and excited about what can come next. Whether it is another special dealing with his family, and life as a burgeoning celebrity, or him really taking note of the darker times of his life and flexing some dramatic muscles.