Sorry For Your Loss: Season 1 – Recap/ Review (with Spoilers)

by Amari Published: November 22, 2018Last Updated on May 27, 2021
FacebookTwitterPinterestRedditEmail

Sorry For Your Loss is a moving show which sadly stumbles as it tries to distance itself from its central tragedy.

Table of Contents show
1 Summary
2 Highlights
2.1 Mental Health Struggles
2.2 Matt’s Relationships
2.3 The Kind of Rude Leigh Is
2.4 Meeting Bobby
2.5 Addressing The Culture Difference
2.6 Leigh Trying To Move On
3 On The Fence
3.1 Those Not Named Matt, Danny, or Leigh Got The Short End Of The Stick
3.2 The Show’s Future Without Matt
4 Overall: Mixed (Stick Around)
4.1 Has Another Season Been Confirmed?: Not yet
5 Follow Wherever I Look on Twitter, Like us on Facebook and Subscribe to the YouTube Channel.

Sorry For Your Loss focuses on Leigh’s family, and her brother in law Danny, as they try to deal with the recent death of Matt. Someone who, depending on who you ask and their perspective, either killed themselves or died accidentally. Something everyone is working through as they deal with their own daily struggle. Be it Jules dealing with her sobriety, Amy dealing with being lonely and having to be strong because wasn’t no one coming to pick up her slack, and Danny just getting his life together.

Check out Sorry For Your Loss exclusively on Facebook Watch. 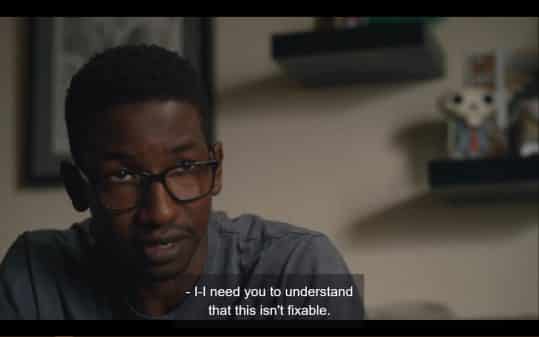 Matt: I-I need you to understand that this isn’t fixable.

Whether we are talking about Jules’ issues with sobriety or Matt’s depression, we are given what usually is exclusively seen in movies in episodic television. Then, as an added bonus, the people dealing with the illnesses are a person of color. That point especially hits hard with Matt since he is the heart of the show. So with him talking about coming to terms with his mental illness, dealing with medication and one very specific line:

When I got diagnosed […] it was one of the happiest days of my life. My doctor telling me I had a disease instead of a character flaw. — Matt

In that line, he speaks to what a lot of people of color go through. The idea that it isn’t depression but you being lazy. That you being overactive means you just need a good ass whooping. There are probably a ton more which correlate but just hearing it out loud is just, I don’t know the right words to say. I will say though, there is also a need to address the fact neither Jules nor Matt are doing well with little to no issues.

For Jules, being sober meant a massive loss. She lost friends, what helped her have social skills, and now has to relearn what it means to be an adult who likes being out in the world. Something which comes with some difficulty, especially during a character’s wedding, because sobriety means her realizing how lonely she is – may have always been.

Then with Matt, we have the question of whether he committed suicide or not. Also, there is this thought about always being in pursuit of happiness. Specifically, thinking if I had this, if I did that, I would be happy. Yet, as shown with Matt, that isn’t necessarily the case. His struggle, with joy and depression, gives us what feels like a portrait not often seen. Especially since he isn’t someone who is just naturally isolated in life. He has a job working with teenagers, a wife, and a family. One which, yes, has its issues, but his family loves him deeply and his wife’s? PSH! They love him more than Leigh. Reminding you that depression really doesn’t discriminate and even if your life seems rather good in public and behind closed doors, it doesn’t change what is going on in your head.

When I say Matt is the central figure to this show, I mean it. If the scene doesn’t feature him or is about him, there is a different and sort of foreign energy. Making you glad he isn’t “Fridged,” in terms of his death just being used as a catalyst. For seeing him with Amy and the understanding he gives her, the joy we see out of Leigh, who often seems miserable and rude, and how he can be this light in so many people’s lives while he is in a shroud of darkness… it makes you so emotionally invested. Making the fact you know he is dead like someone tightly gripping your heart. Not with the desire to rip it out but leave you alive but in serious pain.

The Kind of Rude Leigh Is

Frankly, Leigh is a borderline ass****. Yet, thanks to Matt, you realize it’s because she is the type of person who, unless she is invested in you, she’ll treat you with a slight air of indifference. If not with a slight attitude because you are getting in the way of whatever goal she had that day.

For most of the first season, there is a heavy focus on Leigh’s family. We see her mother built up, her father, his new wife, and also her adopted sister. When it comes to Matt’s family? Well, it is established his dad died but his mom is very much alive. Making her one episode appearance quite impactful for she answers all some of the questions you could have about Matt’s past – especially in regards to his father. On top of that, we get the full on perspective of a mother dealing with the idea her child committed suicide. Having a shift in which you wonder if there might have been something you’ve done, as a mom, or didn’t do enough, which contributed to it. Something that, with there not being a huge amount of Black shows focused on mental health, it makes this little side pocket giving the topic a voice a big deal.

Though not done in a huge way, you have to appreciate Matt being Black and Leigh being white wasn’t just the avoided Elephant in the room. In minor ways, nothing huge, the differences between their cultures are addressed. Mostly in episode 7.

Leigh Trying To Move On

While Matt holds the weight of the emotion, it is through Leigh, as a sort of medium, that you experience it all. Giving you the very rare, and thus unique, perspective of watching someone her age deal with losing their spouse. Well, not so rare there isn’t another character in her support group going through it, specifically a young woman named Becca, a soldier’s widow, but rare enough where you can’t think of another production which tackles the topic. Especially the way Leigh does in which it is like she has to consume all of the grieving and guilt and doesn’t wish to share it.

Making it where you see Olsen walk a tightrope. One that has, on one side, this need and desire to feel for her yet, at the same time, wish someone would curse her out. Particularly when it comes to talking to her family for it isn’t like they weren’t close to Matt as well. Not their husband, which she makes clear, but even her coming at Danny makes you wish he had less decorum and understanding.

Those Not Named Matt, Danny, or Leigh Got The Short End Of The Stick

While we do learn about Amy, Jules, and other characters, it really does seem that anyone whose story isn’t entangled in Matt’s gets the short end of the stick. Yes, Jules is dealing with sobriety issues, and Amy is having a difficult time being single, a businesswoman, and more, but the storylines seem so mundane. Making it so you barely feel a need to invest in these characters and their non-Matt related problems.

The Show’s Future Without Matt

Which leads to what may become the biggest issue of all for this show: What will it do without Matt? From what it appears, Leigh makes peace with Matt’s death and the main hook of the show was getting to know him, see his interactions with his family, and so on. Take him out of the picture and so comes the question if everyone will drastically lose their appeal to Amy and Jules levels?

The main issue with Sorry For Your Loss is that it seems like a limited series which may extend past that. Which, if we go by Olsen’s ideas for a second season, that is, dealing with the grief of being an adopted child or losing a marriage, Amy and Jules focused storylines, it may mean the second season is going to be a serious struggle. For I don’t think in casting Athie and really having him hold the emotional weight of the show, it really prepped for a thereafter.

Hence the mixed label. While you will enjoy the tolling drama of Sorry For Your Loss, it is hard to say it could really be a multi-season show and still be considered good. Especially considering how much, in a way, closure Leigh got in the finale. Making the possibility of a second season seem like the premise testing if it’ll overstay its welcome.

Has Another Season Been Confirmed?: Not yet