It’s time to talk about sex and while open communication has been encouraging and consistent, there are some road bumps this time around.

Though virginity is a social construct, that doesn’t make the first time any different. However, one of the things which start off the conversation is how different everyone’s first time was. Now, it is never made clear if Willow had hers, but it appears her friend Telana did and of course Jada and Adrienne. So, when it comes to Adrienne, being that she was brought up old school, there is a certain apprehension to even talk about sex. Never mind the first time which sounds like it either was done without consent or she wasn’t necessarily gung-ho on the idea.

As for Jada? Unlike her mom, it was magnificent for her. There wasn’t this pain she was worried about or nothing like that. Leading to the question of what introduced each person to sex? Well, as noted, Adrienne grew up old school so sex was presented with yellow tape and warnings. As for Jada, it seems at the age of 9 she was taught about self-pleasure and that set her for life.

Leading to the kids. Well, It is made clear with the girls that when it came to talking about sex, they went to their moms. For Telana, her dad didn’t even want the idea or topic of his daughter being sexual brought up. As for Will? He also circumnavigates that by trying to make it an intellectual discussion vs, as Willow says, an emotional one.

Oh, and speaking of Will, that was Willow’s introduction to sex. She walked downstairs and caught just a silhouette of her parents. Didn’t see nudity or anything like that, but knows something was going down not meant for her eyes. You know, sometimes I feel like, as audience members, we’re in Adrienne’s seat sometimes. For some of the things said on this show aren’t shocking, but there is a need to be like: “Really?!” Like, take the idea of a person’s grandma introducing them to pleasuring themselves. Of which, I was honestly wondering which grandma was that because, considering how complicated the subject is for Adrienne, that couldn’t have been her momma right? But, grandparents usually do try to correct their mistakes by how they handle their grandchildren, don’t they?

But with noting that, more and more you get that it wasn’t just Adrienne’s addiction and her working all the time which made Jada so free. There were active influences involved in the process.

The consistent theme with this episode, maybe the show as a whole, is how liberal things have become generation to generation. For with there being 18+ years per person, you can see the leaps and bounds made. I mean, listening to Adrienne and how she brings up sex being something good girls don’t do or enjoy to Willow and Telana saying sex is fine as long as there is respect, it a huge gap. Never mind Willow and Telana having conversations about how to do their vaginal hairs which is foreign even to Jada.

Yet, as usual, Adrienne is a bit in awe. Especially as pleasure gets brought up for Jada outright says there was a time where she orgasmed 5 times a day and was just enjoying her damn self. Especially since, for a period, she swore off men and struggled with her sexuality. Which, in this context, I wanna say she meant how she expressed her sexual desires vs. perhaps being queer.

But now, things are a bit different. Sex toys and all that was Jada’s thing when she was single but now – not so much. For, like Telana, she sort of sees a sex toy as a third party. One which, if I understand correctly, gets in the way of closeness.

Something which Adrienne is silent about since, until a few years ago, she had no experience with sex toys. Not because she wasn’t curious but because she just wasn’t raised to pursue that kind of curiosity. In fact, in one of her 4 marriages, it is noted that sex was such an issue for her husband he recommended her to go see counseling. 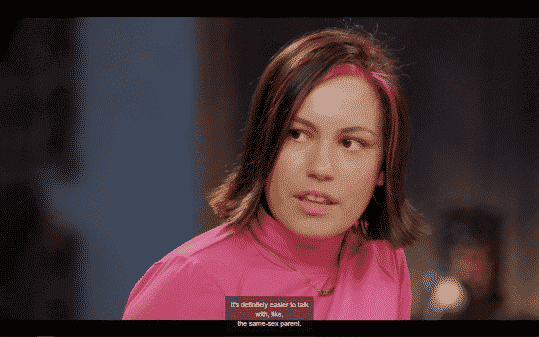 Telana: It’s definitely easier to talk with, like, the same-sex parent.

It’s really interesting the amount of openness about sex at the red table. In a way, it is like how open guys can be but not as vulgar or strictly about the act of sex. Like, dudes talking about what they do to their pubic hair is not a thing. I don’t even know if for queer men that is a thing.

But can we talk about Telana’s place in this for a second? Though presented as Willow’s friend, notice how comfortable she is with these discussions. Can you imagine, in a way, having your child grow up around the Smiths and having the kind of conversations you may not be comfortable with? For while, I’m sure, considering their celebrity, they never took it too far, there is the need to wonder how they approached conversation with other people’s kids about touchy topics?

Another generational comparison is dating and monogamy. Not just in terms of sex and how Jada sees it as a sort of more, laissez-faire thing vs. something you usually did with your boyfriend. She wants to know how people start a relationship and feel about monogamy. Which leads Willow to flatly say boys are, for a lack of a better word, cowards. They can text and DM like there is no tomorrow but approaching you? HA! Telana even says, 50% of relationships, like hers, probably start with a DM.

Leading to the question of monogamy and Willow outright saying she doesn’t think it is for her. Which it seems she is in the minority of. However, with Willow being in the minority about this, so comes the question of whether Jaden and Willow were raised differently? Of which the answer is yes and no. No in terms of they weren’t allowed to sleep over other people’s houses because Jada was very protective of both and didn’t want either to be in the position to be molested. Yet, also yes for there are some things Willow has been allowed to do that Jaden couldn’t, and vice versa. 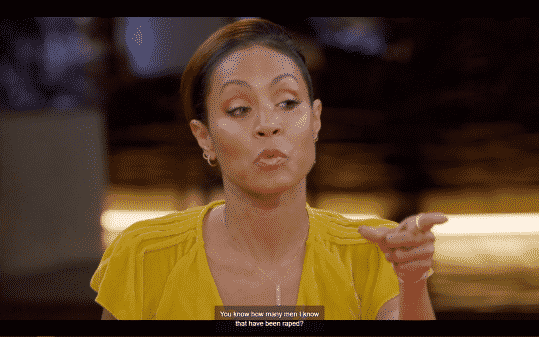 Jada: You know how many men I know that have been raped?

Considering how Willow has talked about her dating life, her answers weren’t that surprising really. Like calling dudes cowards, which I wish Jada called her out on, like when Willow implied stuff like rape and assault isn’t something men have to deal with. But, it showed a valuable lesson in a way. Not all things need to be contradicted or corrected. Jada knows Willow has found dating frustrating to a point and while she participated in the conversation, she let Jada set the tone and be the one who was the most liberal, if not shocking. Because, at 17, as mature as Willow is she still is clearly finding herself.

[…] the stuff of life is meant to be lived, not analyzed.