In an episode which brings on the legendary Jane Elliott, Jada, Adrienne, and Willow address the issues Black women have with their faded Black counterparts.

But How Do You Not Understand/ The Generational Divide: Jada, Adrienne, Willow

While Willow, as she has often done lately, throws in a line or two, she mostly listens as Jada and Adrienne go in. Adrienne recounts dealing with segregation growing up and how life was soon after. Including a supervisor, noting how Adrienne could now access some stores, spoke about them [Black people] being able to now try something on and then steal it. As for Jada, she too has experienced racism. For her, it was in the form of a cop calling her the n-word during, what I want to say is, the 1989 Greekfest riot at Virginia Beach. She doesn’t specifically name it that but she notes a lot of things which correlate with that event.

As for Willow? There are 0 specific incidents brought up but she does not she gets what her mother and grandmother feel. Especially the idea of wanting to make others feel what they feel. Leading to the need to question why white women, in Jada’s mind, don’t fully get it. They too are ostracized and oppressed so what is the problem? A topic which causes a bit of self-reflection for as much as they wish to address white women they, Adrienne and Jada, find themselves addressing what they bring to the table.

Take the fact they have white people in their family, who married in, and how they were treated at first. Heck, how Adrienne treated a white boy Jada was dating before. In that, they recognize their own issues but especially how much harder it was for when a white woman was coming into the family vs. a white man. Which almost led to Adrienne bringing up the rejection of Black men for white women but Jada shut that down. She can understand Eurocentric beauty standards being an issue, and agreeing on that. However, blaming white women for the reason Black men are going to them and choosing them over white women is unfair. Leading to perhaps where their crux is. Adrienne: Yeah, now you can— You can go and try ’em on and steal ’em.

In my mind, this was not the kind of conversation which could be condensed into a half hour. It just isn’t. Whether just speaking from a personal perspective or living as a Black woman, it just isn’t enough time. Especially just taking note of what Adrienne went through. She has gone from segregation to white women like Annie, spoken of later, wanting her to be her friend and it being kind of awkward. Then we got Jada talking about how the police treat Black women. A topic that deserves its own episode.

Leading to the need to say: I’m starting to wonder if, after Willow revealed she used to self-harm, and the press picked that up, it made her a bit more cautious about saying too much. Because it has honestly felt like she has gotten more and more quiet as the season went on. Though it could just be, with some of these topics, even though each episode isn’t live, Willow feels the need to really take stuff in, figure out how she feels, before making a comment. Be it because that is her conversation style or because she knows it could mean her DMs and mentions blowing up over something she didn’t think would become huge.

Though I think we also have to add that Jada doesn’t push people to talk much. She did, a little bit, earlier in the season, but now she lets folks be. Hence why, a lot of the time, it seems like she is having a good back and forth with Adrienne and if Willow adds her two cents, fine. If not, and Adrienne has said her piece, next segment!

Annie, one of the producers of Red Table Talk is invited (low-key coerced) to the table. Thus giving us that usual, “I didn’t know” and “What can I do?” spiel. Also, she begins to note the argument of not knowing when she is privileged since, for her, privilege might be what the Smith’s have. You know, being rich and having certain luxuries.

But there is also, through Adrienne, the issue some white women may face. That is self-imposed segregation because of one reason or another. Take Adrienne not really desiring to have a white friend. Thus making it so her experience and perspective is foreign. In a way, the show tries to balance the scales by pushing the idea it is not just on the Annie types, but also Adrienne and Jada kind of women as well. You can’t just expect to be reached out to over and over, you got to eventually stick out your hand as well. 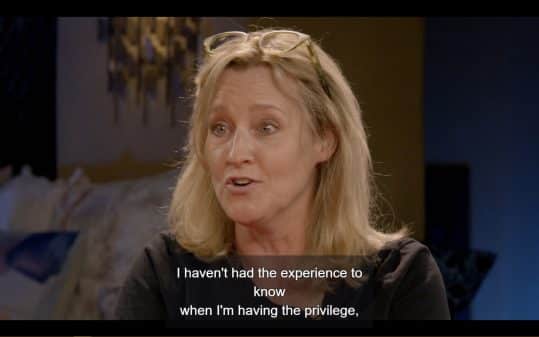 Annie Price: I haven’t had the experience to know when I’m having the privilege

Let’s take note of a few things: First and foremost, Annie is a real person. Also, let’s note she isn’t a celebrity, didn’t really want to speak on camera, and doesn’t have media training. With that said, her tone made me uncomfortable. If only because it brought about that victimhood vibe. One which Black women don’t really get to have and while she recognized there is a lot she doesn’t know, it makes you wanna side eye her.

Yet, so comes the need to remind yourself you don’t know her life. I don’t really check who produces a film or show, since it isn’t that much of a swaying factor for me. However, who knows if Annie may not have been on many shows like this previously. Heck, this could be her first gig, a mid-life change, and people of color, women of color, may not have been part of her life beyond what was seen on TV or in movies. You never know.

Then, when it comes to her ignorance, let’s be real, very few who talk about white privilege, or anything like that, speak in a way which wouldn’t put you on the defense. Not to tone police or anything but the subject is something people get passionate about. Especially since most, despite the positions they have taken on, feel like it is something they shouldn’t have to explain over and over. Particularly because there is a free service named Google. Yet, the issue with Google is that it doesn’t drive conversation and with being shut down like that, it sets a precedent. Hence Annie’s fears of talking about race because backlash can be anything from being shut down to being made internet famous.

Nothing Is Simple, It Takes Work: Jane, Jada, Annie, Adrienne

Jane Elliott, who has been, since the 60s, has been trying to wake up her faded Black cousins, comes to the table and one of the first things she does is come for Annie’s neck. Not to say she lets everyone else off the hook, but hearing about Annie’s ignorance triggers her in such a way that it is hard to not feel a certain type of way. Yet, she is the epitome of someone tired of racism. She is tired of people feigning ignorance when there are so many books and platforms to learn. Also, she is tired of the American education system making it so people have to unlearn white supremacy.

After all, as she notes, for Black people, depending on your district, your contribution to American society might just begin with slavery. Much less, if you aren’t Black but Latinx, as John Leguizamo says in Latin History for Morons, you may just not be mentioned at all. Maybe a footnote at best but a quiz or test question?

Leaving one last thing, Annie notes, as the country’s demographics change, people of color need to go on the offensive. They have been on the defensive too long and, the way it seems, she thinks it doesn’t serve them too well. For if they are going to end the plague which is white supremacy, started way back when the Spanish Conquistadors wanted a simple way to know who to kill, something has to be done. 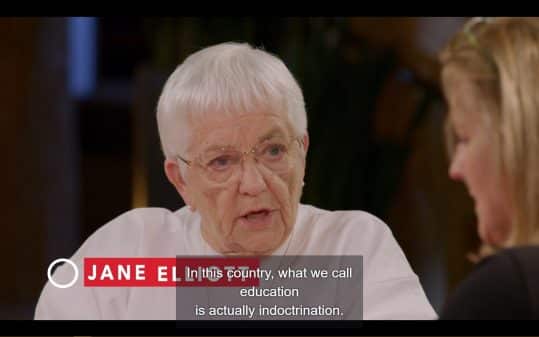 Jane Elliott: In this country, what we call education is actually indoctrination.

Again, it feels like a very complex topic got condensed. While Jane got to drop some bombs, call out those like Annie, while also put Jada and Adrienne on notice a bit, we didn’t get a full conversation. It was nice that a special guest was brought in and it wasn’t just Jada speaking to them but, it felt like the opportunity wasn’t taken advantage of like it should. Even Jada talking about being a womanist v. a feminist, there was just so much said that could and should have been taken further. Much less, I wish got the kind of conversation we formerly had when the show started.

Not to imply this was a bad episode, but I think it definitely was one that tried to do too much in so little time. Add in Willow barely talked, Annie walked into the lion’s den, and Jane is the type of person who should have been at the table since the conversation began in, well it was just not the best episode.

Prejudice is the emotional commitment to ignorance.
— Adrienne

Put “should-ing” on a shelf. It doesn’t matter what you should do, what matters is what are you going to do?
— Jane Elliot

“In this country, what we call education is actually indoctrination.”
— Jane Elliott

The change was already happening in my mind, but now I’ve gotta change it in how I live.
— Adrienne