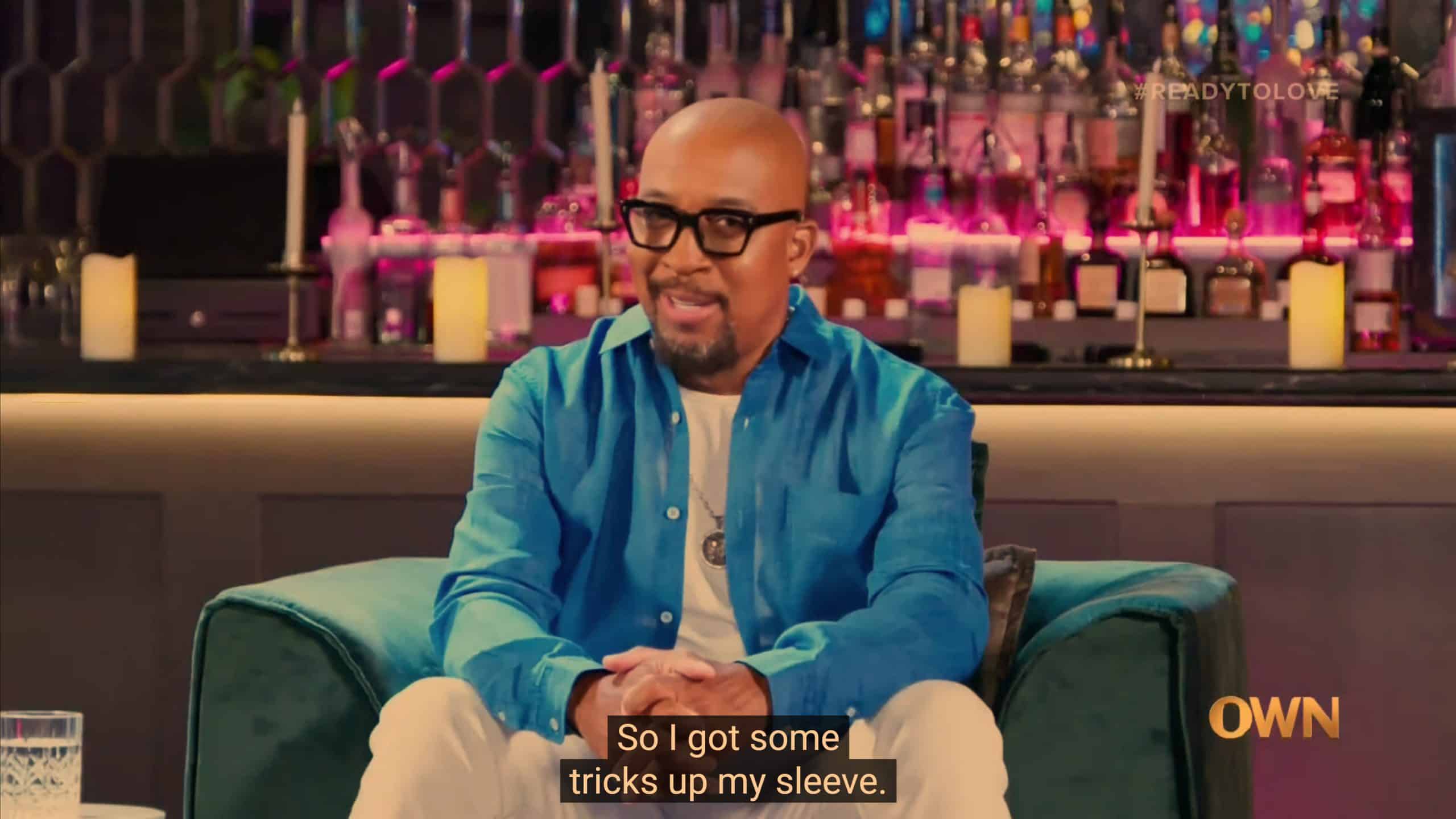 "Marcia talking about having tricks up her sleeve, with Nephew Tommy pictured," Ready To Love, "I’m A Smoocher," 2023, (OWN)

With the mixers out of the way, small group and one on one dates begin, and while many rise to the occasion, others fall flat on their face.

A lot of people definitely find someone they could see something long-term with, for the most part. Jeffri and DeMario go on a date where they go horseback riding, since she loved growing up with access to a farm, and him hoping on a horse and it being like second nature to him? Then add him highlighting her having kids as a sign of time management and financial planning skills? Oh, she has definitely found someone she is attracted to.

But, not to be outdone, Cynthia and Andre go on a one-on-one date, and since Cynthia is very much open and willing to be vulnerable, she talks about being a strong woman being a defense thing and her desire and willingness to be soft with the right person. Cynthia even cries talking about this for just being given the space to open up safely makes her emotional.

As for everyone else? Lyndon is cool. He goes on a group date with Tony, Morgan, and Marcia, and while Marcia curves him when he goes for a kiss, they’re cool. Also, he goes on a solo date with Jonique, and while there aren’t sparks, butterflies, or people wanting to claim each other, things are good. He is an option, but maybe no ones top pick.

That is opposed to Morgan who wants to love and trust Tony, but there is the wonder of who else he is saying all the right things to? Then for Mercedes, Mark-Anthony pretty much just doesn’t have to say or do anything stupid and he has her. Though, to really show you how nearly everyone has found someone? Blake and Sue-Ann find themselves canoodling and enjoying each other’s company! He even gives her a nickname for emergencies, in case they ever need to do an Irish exit.

It’s A No For Me – Corvaya, Fabrice

But while many are finding potential matches, Corvaya is not so lucky. While Fabrice may seem good on paper, he doesn’t know how to follow that up with anything meaningful. Yes, he had and sold a successful business and enjoys bike riding, as Corvaya does. However, then he wants to talk down to her as if knowing a Puerto Rican woman in the past, dating her even, means he can easily pick up and figure out Corvaya like she is the latest model and not a unique and individual person.

So with that, Corvaya strikes out, and Fabrice puts a nail into his coffin.

Though, for a hot minute, it did seem Blake could have messed up again and sealed his fate. Fabrice talking about sex so much and insulting Corvaya may have led to Marcia dismissing him, but Jeffri making it seem Blake is possessive, doesn’t want to be in the process since he has already chosen her, it raises red flags. The kind Sue-Ann dismisses, even when Blake makes some confessions to being possessive, but not into Jeffri as she claims.

While many have made it clear “Ready To Love” is an emotional and tiring process, I don’t know if we’ve ever had someone as open as Cynthia. Many seem ready to date and do what they have always done, but with a curated set of people for them to potentially give a chance to. Cynthia feels different. Her openness doesn’t seem to come from a place of, “I minas well try this since clearly what I’m doing isn’t working.” You know, having an attitude regarding what has or hasn’t happened, so they are just exploring another option.

When it comes to Cynthia, you are likely reminded why OWN continues to produce seasons of this show. It isn’t because it wants to show 30+-year-old Black people making fools of themselves on television, it wants you to see women like Cynthia. Those who want to find love, be open, be soft, and find partners with whom they can let their guard down. It wants to change the narrative and yes, deliver some drama too. But mainly, show that finding love, Black love, can be possible, even if you have to sift through the bulls***.

Case in point, DeMario surprised Jeffri by not only picking up on riding horses quickly but being able to find a positive spin on her having kids, which may have been an issue for men she liked in the past. Heck, even though Marcia curved Lyndon’s kiss, she reassured him that it was just because it was too soon and unexpected. He admitted that he has a problem with misreading signals, and her verbalizing the grace she was willing to give, paired with him being allowed to explain himself in a safe space, means real development for the two of them.

And the list goes on and on, and it makes us happy that there are a slew of possibilities, unlike some of the last few seasons.

The Drama Is On The Way

While transparency has always been a difficult thing for “Ready To Love,” there has been an effort to make it so everyone is on the same page through not only group mixers but outright having it so, when the men and women are together, people can be confronted and explain themselves. But, the lounge deliberations have been notorious places where he said, she said situations have started, and the beef between Jeffri, Blake, and Sue-Ann is a prime example. Jeffri has one version and experience with Blake, and Sue-Ann has another, which is in direct conflict because of what she wants from Blake and how she sees him.

So, based on previews for the next episode, it seems what we’re guaranteed is the kind of drama that will balance out a lot of the good we saw in this episode.

Ready To Love: Season 8/ Episode 3 “I’m a Smoocher” – Recap/ Review (with Spoilers)
Overall
“I’m A Smoocher” delivers a reminder of what “Ready To Love” is about before it seemingly ventures to what it is notoriously known for.
Highlights
Seeing A Lot Of Good, Potential Matches
Cynthia Opening Up
Disputable
The Drama Is On The Way
82
Subscribe to our mailing list