The final category is: Mother of the Year and considering all Blanca has done for her children, even her mother, will she win or will there always be next year?

With the death of Costas, while Pray Tell may not be draining bottles as he was, of course, he isn’t in the best of spirits. Yet, thanks to Blanca, he gets matched with this man, not boy, named Keenan. He is the bartender for the balls and has had his eye on Pray Tell for quite some time but has been intimidated. But, thanks to Blanca, his number gets passed along and before you know it, Pray Tell and Keenan are having a proper date – at a fancy restaurant.

Leading to Pray Tell thinking this is all too good to be true so he drops the HIV bomb. For he’d rather give Keenan an out now before either one gets all up in their feelings. However, Keenan notes he has dated positive folks before and with a passionate kiss to Pray Tell, it seems he will again. In this world, there are a swath of things which, upon you having that status, it makes dating daunting. Some things are manageable, like becoming a parent or unemployed. However, HIV is one of those things which may make you feel it is time to retire or find that community and hope for the best. But for Pray Tell, you have to love that this man not only said he accepted him, and passionately kissed him, but also he found himself a grown ass man. Let me add: A grown ass BLACK man.

Which is important on so many levels. First and foremost, when it comes to queer Black men, be it actors, singers, or characters, seeing them with another Black person seems so rare that if you discover one it might be a good day to play the lottery. Add on the fact these two men were of similar age too? Never mind Pray Tell got HIV on top of that? There is layers of hope here.

Now, granted, Pray Tell is well kept so even if his category is “Daddies,” he isn’t not slouch. You cannot guess that man’s age and he doesn’t fit middle-aged man realness. So, while hope isn’t given to all, many certainly can look at Pray Tell from different angles and see that love may find them and give them what they have long deserved.

So, being that Patty is having issues with her and Stan’s kid, she is ready for him to come back but on her terms. Terms which include him leaving his Manhattan job and making it where she can go back to school for her masters. Which, because that takes away power from Stan, it leads him to run to Angel again since, let’s be real, Angel is his escape. With Angel, he is in power, she looks at him with goo goo eyes, and she doesn’t have the same opportunities as Patty. She can’t glow up and find independence outside of him.

Yet, with Blanca revealing she got HIV and hoping Angel can take over, she found something outside of Stan to validate and love her. So, she sends his behind back to Jersey to be back to his wife and kids. She has had many Prince Charmings and this is but the end of their fairy tale.

Leading to Elektra. Homegirl has hit rock bottom. I’m talking sleeping in restaurants and on benches rock bottom. Though, maintaining her locks for a queen will remain beat even when life is beating her down. But, luckily, she doesn’t seem to be forced into that position for too long. Once Blanca catches wind, she has her come to her home, and even kicks out Ricky and Damon from their room so she can be comfortable. Albeit, not the way she is used to but at least with a roof over her head.

Thus making it where we see things come full circle. Just as Elektra took a down and out girl named Blanca and brought her into her house, so did Blanca do that for her. After all, even at the worse of times, or at Elektra’s most annoying, Blanca always recognized her as her mother. 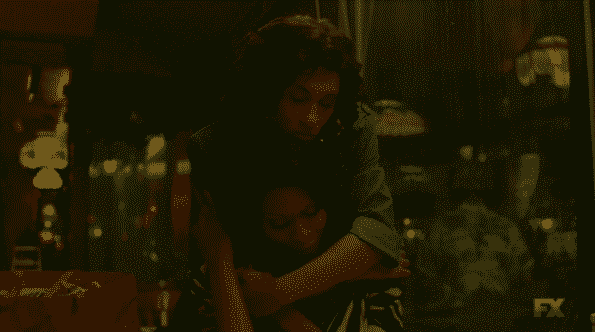 I really hope that Stan and Patty, alongside Matt, get cut since Angel isn’t messing with him anymore. PLEASE LET IT HAPPEN! For while I get they can serve some kind of Trojan Horse purpose, I think this show holds its own enough to not need cis white characters season to season. It would be so much better to dedicate whatever screen time they had to picking up the stories of trans leaders and people. I mean, there is mention of the House of Xtravagenza, so why not bring some Paris is Burning characters to life? Tell their stories and cement them? Heck, what about Marsha P. Johnson and others who were part of Stonewall?

I say this because, who knows if what Pose brought will be a singular entity or a movement. Having this many trans people seen, heard, in three dimensions, and living. When that happens, sometimes you got to strike while the iron is hot and make sure everyone can get their spotlight while the lights are still on.

Leading to Elektra and Blanca. What you have to love is Blanca, no matter how nasty Elektra may have been, she has never forgotten that act of kindness which not only got her off the streets but made her into the woman, and mother, she is today. Because and in spite of, Elektra set a standard for Blanca. She made it seem the ball and its people are a community. One which will get you together, but in the end, it should all be love. For them getting you together in a safe environment means more safety out in a world where you often won’t have them there looking out for you.

But also, the beauty of Blanca looking out for Elektra is because, as joked about, Elektra is a woman who is aging. It isn’t clear how old she is but with no family but Blanca, and now the House of Evangelista, it means when she is truly old, she won’t have to worry about being put on the streets without her looks or wit to save her. She has the type of safety and comfort about her future as she once gave Blanca. Showing truly, what goes around comes around.

It’s time for the final ball of the season and it is one for the ages. It begins with House of Ferocity vs. House of Evangelista and because Lulu and Candy decide to break Blanca down, she needs a moment. However, being that mother Elektra is on her side, she gets Lulu and Candy together. In fact, when it comes to Candy, she gets in her head. I’m talking, she messes Candy up so bad that when Evangelista sweeps them in nearly every category they compete in, including House vs. House, she goes mad.

I’m talking more than cursing out a judge but taking out a hammer and getting ready for a fight. One which, luckily, Lulu ends but the damage is done. House of Ferocity burns to ashes and looks like it was ran by a complete and utter fool.

Leaving only one last category left: Mother of the Year. With Elektra’s house gone and buried, and a bunch of mothers we have never heard of, there is the question of whether Blanca would win. The episode has been on a rather positive note with Pray Tell finding love, Angel getting over Stan, Papi returns home, and Elektra and Blanca as close as ever. So, like the first season of Glee

, would something be left to earn in season 2?

NOPE! Blanca wins mother of the year and there isn’t a dry eye nowhere. And damn if the show doesn’t end things on that happy note and doesn’t dare hint to something bad happening. With Ryan Murphy recently noting he isn’t into “shock value” anymore, so comes us getting an ending without a twist, an ellipsis, or anything like that and THANK GOD! For, to be perfectly honest, things were going too well and being that I have a love/disappointment relationship with what Ryan Murphy has his name on, I feared the worse. Especially since this has gone over a lot of things the trans community deals with but being murdered and their crimes unsolved hasn’t been touched. Add on we got two major characters with HIV and you had to be on bated breath too.

Thankfully though, we got a reprieve and instead saw Blanca’s detractors decimated and her winning Mother of the Year. Which, to be honest, kind of felt almost like when Damon got his scholarship. While you recognize, as a named and developed character, there was a likelihood of her winning, at the same time what does it mean to win anything when you have no noteworthy competition? As, I believe, Elektra said earlier in the season.

But, names of the other houses already forgotten aside, with Elektra decimating House of Ferocity comes two new members to Evangelista and the question of where all of those behinds going to sleep? While Elektra now has a job, thanks to Blanca, Angel has money coming in, and Blanca too, does this mean they’ll move or stay in that apartment? Though Elektra is thankful, she is also bougie and a complainer. Will she move out, start a new house, and be worthy competition to Blanca? Maybe take her two kids back?

I don’t know where season 2 may go but I hope, with the way this was handled, as Ryan Murphy moves to Netflix, it means there will be more of this and fewer shows which peak early on.

One job ain’t nothing if it don’t lead to another.
— Blanca