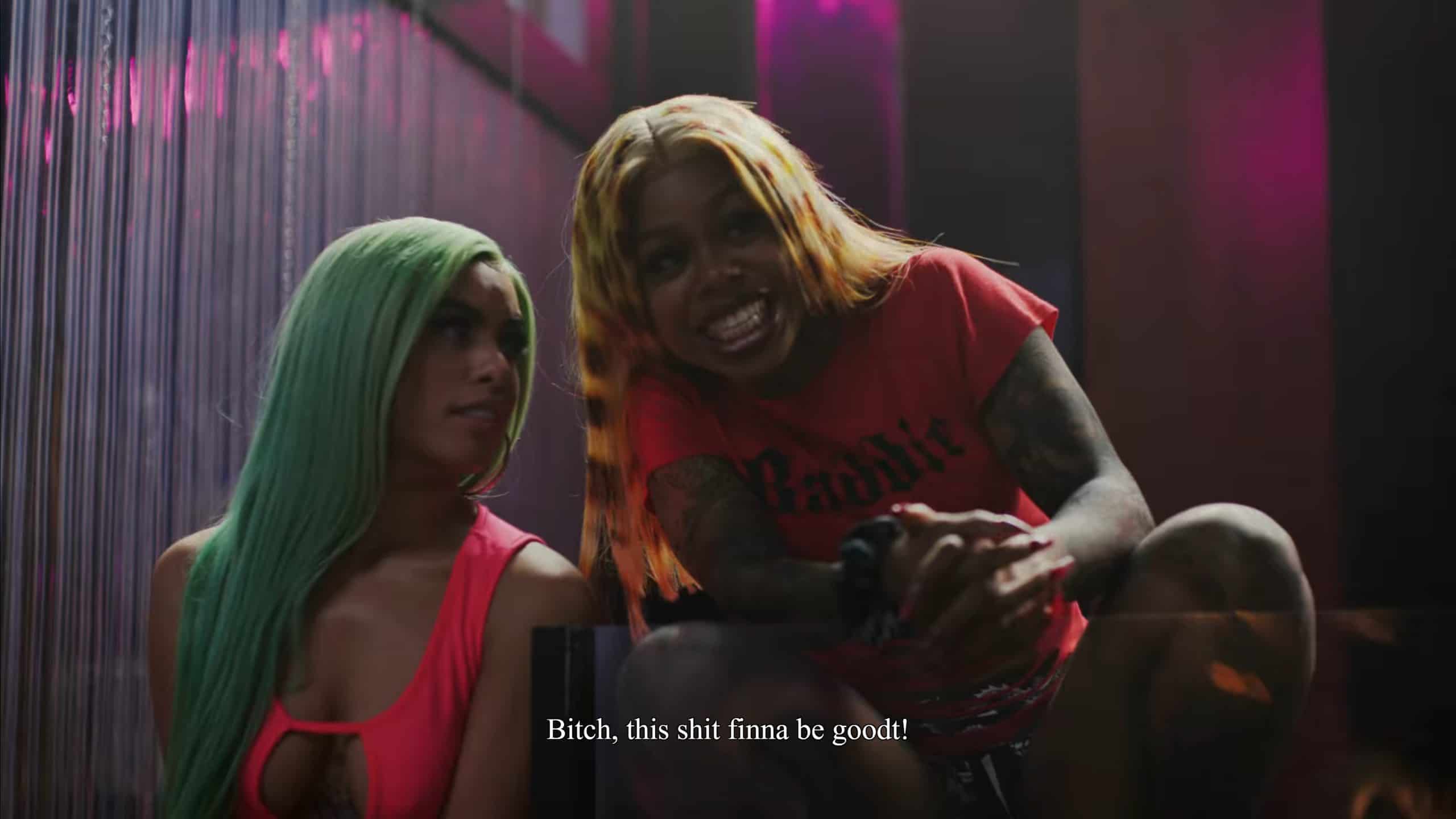 As Roulette makes it clear she isn’t a sidekick, and Lil Murda lives up to his name, Uncle Clifford seeks out whoever can save The Pynk.

With Woddy handling Big Teak’s funeral, so comes a conversation about why Rome died, and Lil Murda realizes his friend isn’t above playing God. But, with Woddy showing he is down for the cause, Lil Murda allows himself to be vulnerable enough to reveal that the video Rome had, which he did at 15, was done to help feed his family. And with Lil Murda being in such a vulnerable position, it makes Pico making it sound like he killed Big Teak a problem. One Lil Murda solves with an assault rifle.

But, with him doing that, Mane, Mercedes’ favorite eye candy, almost gets drawn into what surely will evolve into a gang war. Which makes her deciding to not let him hit it, or get close, one of the best decisions she has made in a long time.

Especially since Mercedes has other problems. Shelle learns about the abortion Terricka had and is pissed, and to keep her calm, Terricka goes home with Shelle, despite Shelle not recovering from her life’s downfall. But, to make matters worse, Keyshawn has returned to the Pynk just in time for the latest reopening, and Roulette and Whisper fawn over her. All the while talking crap about Mercedes, who they think stuck around too long.

But, Keyshawn’s return isn’t something that leads to open arms or a level of indifference by all. Uncle Clifford is pissed, but with Hailey seeing how messed up Mercedes’ arm is, and trying to setup a means for Keyshawn to finally leave Derrick, she uses her authority to overrule them. Which leads to Uncle Clifford storming out.

This leads to an altercation, in which Roulette has to assert herself and show that, despite Whisper getting a lot of attention, Roulette is no one sidekick. If anything, she the pimp in this situation, and since Terrance wants to play, Roulette decides she wants to start a new game of Russian Roulette which Terrance wasn’t ready for. Hence Roulette and Whisper taking Terrance’s clothes, car, money, and Roulette making some change by taking Terrance’s car to Duffy’s auto shop to be stripped.

With So Many Enemies, Can You Make Friends? – Uncle Clifford, Hailey, Corbin, Andre, Patrice, Wayne, Georgie

For Hailey, everything seems to be a challenge. Georgie is firm on offering $5 million. Uncle Clifford won’t listen to reason, and Andre? Leaving his wife makes it clear he wants more, but more isn’t really something Hailey is willing to give. This is something he needs since Wayne exposing his daddy as a murderer has taken him down in the polls and allowed Patrice to move up.

As you can imagine, this is bad for most parties as she is against the casino. However, while Wayne tries to smear her as he did Andre, Patrice has no shame in her ho’ing, check fraud and other crimes. Unlike Andre, she owns her past, which makes her all the more popular. So, upon Uncle Clifford’s advice, Corbin approaches Patrice with money, hoping that’ll end things, but who is to say she won’t pocket it as a campaign contribution?

Rule #77: Sometimes you gotta make falling look like rising in this muh’fucka. ‘Cause they cant, keep a bad bitch down.
— Uncle Clifford

Ernestine Rule # 7629: If you can’t get to the water, sometimes you gotta bring the water to you
— Uncle Clifford

Beulah’s Rules #1: Bitches don’t just cry, they get even.
— Beulah

It’s easy to write off Lil Murda and Roulette’s gangster since we haven’t seen much of it. Lil Murda has never shown himself to live up to his name since we’ve mainly seen his soft and vulnerable side. He’s always been this kid nipping at Uncle Clifford’s heels, being romantic, or just happy to get out of the gutter and travel a bit. Because of that, Lil Murda hasn’t seemed like a thug or gangster. Just someone who joined a gang for protection.

However, seeing him shoot up Pico, despite knowing Pico’s mom and knowing Pico has a kid, reminds you that Lil Murda will pop one off if need be. Don’t get him cooking for people, loving on his brothers, and generally being jovial twisted.

Also, when it comes to Roulette, you must appreciate her getting the same oomph. Yes, we have seen her softer side through Duffy and know she has some ho tendencies. But seeing her as Whisper’s pimp, pulling a gun on Terrence, and showing that neither she nor her girl will be taken advantage of by no punk? I love it. It really pushed her out of Whisper’s shadow, which she only ends up in since Whisper is such a mystery that hasn’t been unraveled.

But now? Whisper is Roulette’s light-skinned sidekick, her bottom ho, and I don’t know if Whisper can bounce back from that or if it is even planned at this point.

Patrice Owning Her Past

What you have to appreciate about Patrice is that she is a holler roller with a past who owns it, and while she is right with God now, she will switch it up. Patrice will quickly go from citing scripture to stringing curse words and vulgar phrases like it’s nothing. It’s appreciated because it is comical and makes her feel real in a way that helps you understand why Wayne, Corbin, and Andre see her as a threat. While they posture and try to seem perfect and respectable, she is out here doing the work they won’t, including getting their hands dirty and sweat on her brow.

Now, does that never mind the trauma she caused Mercedes? No. However, it does push you to more and more want to see not only the two reconcile but see Patrice on her own.

Everyone who works at the Pynk, or is an alumnus, brings more than enough drama to “P-Valley.” So honestly, the idea of Mane, Woddy, Lil Murda, and the gangs they belong to adding something in? I hope it doesn’t happen. Like the Montavious storyline, I hope this dies and is quickly swept under the rug. Mane is handsome, and all, and Lil Murda killing Pico in cold blood led to one of the few non-sexual moments on “P-Valley” that was eye-opening, but let’s not have too much of a good thing.

Andre is just so dry, and the problem is that he doesn’t associate with anyone who can inject any life into his story. Hailey, like him, needs an extroverted, charismatic character to play off. Corbin and Wayne too. So while it is nice to learn the truth about his father, it just leads to a hunch since it wasn’t something I can imagine anyone wondering about. At this point, Andre is a holdover who isn’t someone that can easily be written off, hence why he is still here.

Slowly Delving Into Uncle Clifford’s Past

It’s recognized that an Uncle Clifford flashback episode, like we got with Keyshawn, would be major for the show. After all, their mother has been haunting the past few episodes. Also, seeing the transition from Ernestine’s to The Pynk would be interesting and so much more. However, this piecemeal approach is a bit frustrating. Mainly because you see the screen time given to Andre and characters who don’t pop like Uncle Clifford. So it is almost like we’re getting breadcrumbs to keep us interested while we’re coerced to watch characters who are not the selling point of “P-Valley.”

P-Valley: Season 2/ Episode 8 “The Death Drop” – Recap/ Review (with Spoilers)
Overall
While some characters are slowly becoming liabilities and a potential gang war has us rolling our eyes, “P-Valley” still has a luster to it. Be it Uncle Clifford's past unfurling, Roulette and Lil Murda reminding us of their gangster, and “P-Valley” just finding ways to keep you engaged while fulfilling its obligations.
Highlights
Patrice Owning Her Past
Lil Murda and Roulette Reminding You That They Aren’t To Be Played With
Disputable
Slowly Delving Into Uncle Clifford’s Past
Andre’s Storyline
A Potential Gang War
80
Subscribe to our mailing list Follow Wherever I Look on Twitter and Instagram, Like us on Facebook, and Subscribe to the YouTube Channel.