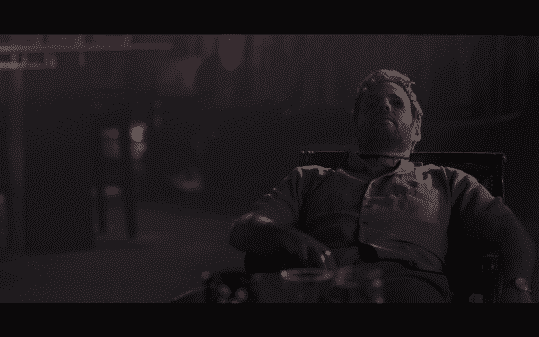 Episode 8 is a flashback episode. One which takes us back to 2007 before Marty and Del started working together.

In this so mundane it could drive you insane episode, we learn Roy’s mom Barb was on drugs. That and he had ambitions to be some kind of TV or movie kind of FBI agent. However, instead, he got the boring accountant style job and that upset him. Though, so it seems, before Marty got involved with Del, he was making headway on getting up the ladder. But then his guy Louis (Ivan Martin) got strangled and lost his eyes. You know how much of a struggle this episode was to get through right? We watch Roy be plain and boring with an ex-boyfriend and his drug addict mom. All the while learning he was a mathlete as a kid… wow! Was this necessary? Was anyone really asking what Roy’s life was like in 2007? I honestly can’t even say I gave a damn about what may have went down between him and Trevor. Never mind whatever issues he had with his mom, much less how agitated he was that his job wasn’t the Hollywood version he signed up for.

The Life I Once Had: Wendy, Marty Wendy gave up a lot for motherhood. She gave up a booming political career and seemingly hasn’t been the same since. For, don’t get me wrong, she loves raising Wendy and Jonah [note]Who she had a tough pregnancy with[/note], but is it enough? Is just being known and needed as mommy enough for a woman with such vast abilities and potential? Seemingly no.

For this is a woman who used to be a bit of a badass. Someone who used to break and enter into homes just for a beer. But now what? She raises children, occasionally gets to go out, but largely lives an uneventful life. One in which she is too young to do nothing but apparently too old and, to some, out of touch to get back in the game.

No wonder she got depressed.

After Charlotte’s analysis of Ozark and determining she hated all the different versions she could have seen of herself, I find Wendy’s confession interesting. The one about her breaking and entering of course. For, not to make this all about Ruth, because I miss her, but there increasingly is this thing about how important a person’s decisions are. Since the beginning, Marty has inundated us with how important your decisions about money are, your morals, and also your work ethic.

So with Wendy revealing this breaking and entering thing, you have to wonder what life would have been like if she ever got caught. Would she have ended up like how we see Ruth now? Using this intelligence we occasionally see of hers just to survive? Would she have even met Marty?

There are a lot of questions I don’t think we need the answer to, but we didn’t really need what was focused on this episode either. But, I will say, this episode did help bolster how much Wendy has lost thanks to being married and having kids. It didn’t go to the place it needed, in terms of helping us understand why she cheated on Marty, much less how she met Gary, but what you going to do? Perhaps the purpose of this whole episode was for us to see how Marty ended up working for Del. Of which basically comes from Del shopping around for a new cleaner since his old one, Louis, he suspected of something. So, with Marty finding Louis was skimming off the top, combined with Del thinking Louis was bringing feds into his business, he strangles Louis and keeps his eyes for safe keeping. Which, years later, we see sent to Marty more than likely.

But as for how Marty got convinced? Pretty much it was the money and him moving around his morals to accept the position. Something he talked to Wendy about, since they were partners at the time, and even on the path of having a third child. But then a car accident ended that dream.

Which may have very well have been the breaking point. Losing that child. For I’d guess with how much work Del gave Marty to do, for he didn’t trust Bruce, that led him to become distant from Wendy. Then for Wendy, while Del’s wife Elena (Nancy De Mayo) may have been fun to be around, with losing a child, no real chance at continuing her career, and being stuck being a mom, that probably led to Gary. Her Sugarwood.

It kind of sucks that a throwback, flashback, or what have you, episode didn’t really cover the stuff you’d really want to know. For who really cares how Del met Marty? I’d rather learn how Gary and Wendy met. Maybe how Trevor and Roy’s relationship ended, or the other stuff which was worth exploring. Hell, knowing how and why Cade is in jail would have been another interesting thing to dig into.

But, as noted at various times, this show doesn’t often focus on the strengths of its actors or story. It, at times, seems to want to cram down this idea that Bateman doesn’t need an ensemble cast to seem talented. As if Linney doesn’t need someone playing an open and potentially vulnerable character to thrive, and it fails. Not to the point I would call this a bad show, but thank god it is only 10 episodes. Even though that in itself is feeling like a struggle.

[…] integrity, my friend… is the shield to greed and vanity.

Great show. Throwback episodes give insight into the characters and is important to know the baggage they carry especially if family related.

Binge watching during Irma and do NOT like this episode. Whoever this one sucks!

O.O I hope you’re in a safe location.

They should never had maked this episode

This show is intense i think, not for everyone… good review though

Interesting take on the episode. I wanted to see how Marty and Del met and wasn’t at all fussed about Wendy’s affair or Roy’s relationship. I thought the episode gradually got better and better and started to feel more essential as it progressed, but the show’s had some open parts that I’m sure some watchers wanted to see explored as well.

It certainly left enough for season 2 to get into. Perhaps why it left itself room to grow and questions unanswered. They knew they had something that would allow them multiple seasons to tell a story.

I wonder if the thing with Roy’s mum was to explain how, in the present, he hates heroin dealers – as he may encounter Peter Mullan’s character at some point.

I think you’re just picking a fight. You really think learning how Gary and Wendy met or how Trevor and Roy’s relationship ended would be more important and/or interesting than how Del met Marty? That’s like the Genesis of the show! And this episode is about the unexpected results of the decisions we make. Besides, you said it yourself! You struggled watching “Roy be plain and boring with an ex-boyfriend and his drug addict mom”! now you want to see how it ended!? I agree knowing how Cade got in prison would be interesting, and I agree that other stuff about the episode could be taken out! And I would agree it wasn’t told the best way possible, but your Commentary remarks are just BS.

The problem here, as noted throughout the show recaps, is the majority of the actors don’t make their characters that compelling. So with that in mind, so comes the questions of other things they could have done. Like, instead of introducing another of Roy’s boyfriends, they could have shown how his relationship with Trevor ended. At least adding some flavor to that established mixed.

Then, in terms of the Gary thing, considering how big of a thing that Wendy’s affair is early on, and how they bring his son into it, how the two met seems like one of those things they could and should have addressed. Especially since Wendy was probably one of the last people security camera saw go into his apartment and come out. So for that situation to become forgotten in a snap seemed a bit odd.

As for the Del and Marty thing, Del just doesn’t have any sort of oomph to me. There isn’t anything which makes him someone you want to learn more about. He is the representative of a Mexican drug cartel and is very okay with gratuitous violence. That, even with what was presented in this episode, is the beginning and end of his character. We aren’t presented with someone complex or with multiple shades to him.

And I wouldn’t say I’m picking a fight. I could imagine a Jason Bateman fan being upset since I place the blame on his for how lackluster this show sometimes seems, but he is the lead. Everything is supposed to rest on him and he doesn’t consistently deliver. At least for me. I’m glad if you found him entertaining though. Maybe even to the point of seeing the Breaking Bad comparisons others are pointing out something he is worthy of.

I find your analysis interesting, though I don’t understand your critique of Jason Bateman. I think he is perfect in this role. He comes across as assertive, a bit condescending, worried, all with a dry sense of humor. Love him. Also think Laura Linney is great.
I am thoroughly enjoying the series. Well done.

I wanna say, at the time, and I’m probably still working on this, not liking the character meant having to play the blame game. The idea it was because of the actor, the writer, perhaps director. Rather than just accept not all characters are going to be for me, liked by me, and that doesn’t lessen the work put into them. Plus, in the case of Marty, I feel like in season 2, after nearly a year separated from the character, he was able to grow on me a bit. I can’t define what exactly changed, off hand, besides a shift in my mindset, but I enjoyed season 2 Marty far more than I did season 1 Marty.

Thanks for this review. I felt absolutely the same. This episode was sooooooooooooooo f…king boring. I needed 4 trys to get through. I thought about skipping it, but wasn’t sure if I miss something important then.

Any episode which doesn’t have Ruth in it is a struggle to get through. For while, at this point in the series, you come to enjoy most of the characters, and tolerate others, Ruth is sort of that jolt which helps you out of complacency.