I can strangely imagine Disney snatching her up for something.

Marty finds religion… as something to exploit to meet his goals. Meanwhile, Ruth is given a bit more responsibility in Marty’s enterprise.

So much to unpack with this topic. Well, first and foremost, Roy and Russ have sex. It isn’t clear who played what position, but it does seem Russ may go for seconds. Moving on, Charlotte and Wyatt hang out again, after all their drama, and she may like him. Granted, there are other boys out there, like this one named Zach (Spencer Neville), who takes an interest in her, but there is just something about Wyatt. Maybe it is because, as much as he fits into this rural atmosphere, he is smart. Might even become something.

As for Wendy? Well, she gets the visit of a lifetime. Gary’s son Josh (Ben Rappaport), tracks down Wendy and is looking for answers. He is trying to figure out who is this woman who is all over his dad’s Facebook. The women who is the key to knowing if his dad really committed suicide by jumping from an 80 story height? Her answer? Maybe. She claims she was breaking it off and that is the reason. Which, with Josh noting that his dad has never been so happy, it helps make sense of things. The one making him happy dumped him so he killed himself. 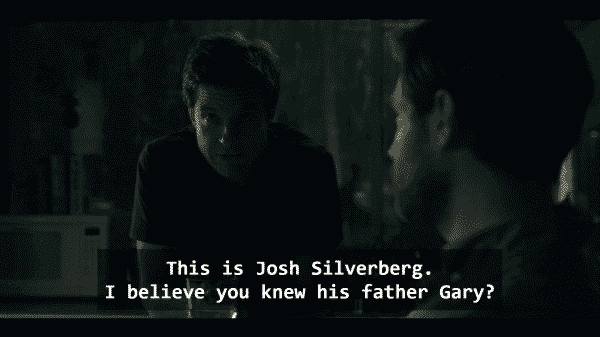 How did Gary and Wendy meet? Did I miss that? For Wendy was a housewife and Marty doesn’t seem like the social type. So did she just meet him at the grocery story? Because, Josh clearly is nowhere near Charlotte’s age, so what was the connection. These are the things which puzzle me.

That and Russ deciding he wants some of Roy. I mean, I’m all for people who talk and act like Roy being gay, but this seemed more to be a shock or to make a statement than something natural. Like, someone just threw Russ into this storyline just for the hell of it. Which sort of bugs me but, hey, who knows? Maybe they can make those two into some weird looking couple that is loving? Though considering Russ will probably be on the down low throughout their relationship, they may just stay butt buddies and that be it.

As for Charlotte? I’m starting to think of Charlotte in the same way I think of Marty. When interacting with the Langmore clan, she is fine. Enjoyable even. It is just when she is with her family she is irritating as all hell. To the point when, as noted in the next topic, Ash decides to do some home invasion research, I wish she would have been there and ended up like Bobby Dean.

Few things, first and foremost, Mason is a likable and naïve preacher. With that, both Jacob and Marty see the value in him. For Marty, building a church for Mason means a good way to clean the $4 million he has left to go through. For Jacob, he is able to move product through hollowing out bibles. So, both find it very useful to use this clean and very nice preacher.

However, it doesn’t seem they can share. Which is perhaps more so a problem for Marty than Jacob since Marty has Ash. This creeper who decides to break into Marty’s house and would have gotten shot if the newly trained Jonah got his sights on him. For, you see, while Jonah may not hang around Tuck, at all, he does hang around Buddy quite a bit. Someone who doesn’t mind the company and even teaches the boy how to shoot a rifle. Almost even opens up to him about why he ended up in Ozark.

Was Ash just casing the house in case he ever had to kill Marty? Or was it one of those “It was easy to get into your house, so imagine how easy it would be to kill or kidnap your family” type of things? Either way, I was waiting on Jonah to shoot him and cause a new mess to deal with. If not accidentally shoot Buddy.

But, either way you slice it, someone is going to get shot between Marty’s family or Jacob’s. For both have these huge operations behind them that likely won’t intertwine well. And Jacob already has sent a few warning shots and being that Marty only has Ruth to back him up, it isn’t clear if she may be enough. Assuming she would even try to save him.

Can You Buy Loyalty?: Ruth, Marty

Ruth is given the strip club to run. For with her making about $80K over the 4th of July holiday, Marty feels it is in good hands. Though, even with him paying her $1K a week for her to manage the place, it isn’t clear if this bought her loyalty. For she tracks down where Marty is hiding his money and with that, who knows what her next move maybe.

Who is Ruth’s daddy? Jacob? Because it keeps being brought up as a credible threat and with us not seeing him once, I am very curious. Though I’m also curious as to why Marty trusts Ruth so much? Does he think keeping her busy will distract her from screwing him over? Does he think just because she is 19 he will continuously outsmart her? Something seems very off here [note]Even though in the last episode I did say he should try to win her loyalty.[/note].

What truck is Russ driving when he shoves Roy out of it when he first kisses him?

I presumed that Roy had some knowledge all along that Russ was gay and that he’s been playing him like a fiddle to get that much closer to Marty, through Ruth or the rest of the family. He knows Russ has been in prison (or at least jail); he’s an FBI agent — maybe he used his contacts to get info from guards or former cellmates…? It just seems that Roy has been working through a well-thought out, if not ridiculous, plan. I don’t buy that the admission that he’s gay when fly-fishing and the kiss in the truck was anything OTHER than calculated. So in that, I completely disagree with the first poster on this thread. Roy wasn’t pushing Russ away; he knew, within the scope of this scripted universe, just how he’d eventually react. At least that’s what I think.

The one question I have is where is the (very cliché) wall of thumbtacked and string-connected photos that we saw in the episode where Roy was hatching his plan? Does he have two hotel rooms? Did he take it all down in anticipation of Russ storming over and making sweet, sweet, rough redneck white trash love to him?

Do we even see that wall more than once? It seems like an idea they had that got dropped.

lol… commenting because no one else is really talking about this show other than critics badly comparing it to breaking bad. i’m on ep5 right now.

-Right off the bat, to address your unanswered question, i think it’s pretty obvious marty and rachel are going to have some sort of Thing, whether or not it lasts. that specific plot point was apparent right off the bat, pretty much the moment rachel came on screen, I thought to myself, “well, there’s the potential love interest!” Frankly, I’ll be surprised if nothing ends up happening.

-I don’t think Jacob is Ruth’s father, and if he is, he’s living under an assumed identity, which I doubt if the people of Ozark are aware of his presence in town. I’m pretty sure Ruth’s father is locked up somewhere. Jacob being the father doesn’t really add up (even though I guess he and Russ DO have a vague family resemblance… or is it the beard?)

-Speaking of Russ, I was surprised yet not that surprised that he turned out to be gay. The first fishing trip with Russ was clearly Roy’s attempt to use Russ to meet Ruth. It was apparent to me that Roy told Russ he was gay because he assumed that that would be enough to drop Russ after he was done using him. I am positive that Roy didn’t expect Russ to actually have a change of heart and take him fishing again. The kiss in the truck seemed to be his way to push Russ away. Roy, as established, is something of a sociopath, but unfortunately for him, I don’t think he banked on Russ being a repressed gay man. Although in the series so far, Roy hasn’t exactly proved his worth as an agent trying to take Marty and the Cartel down, I remain intrigued by his calculating character. I’m interest in seeing how his relationship with Russ develops, and how this new connection between all the characters develops.

-As for Ruth, she is probably one of the deeper characters in the show so far. She has both hard and soft sides, and you can tell that although she has a mean exterior, she is still just a young woman at heart. She has been seen taken aback by kindness and compliments (for example, Tuck telling her she is pretty, Marty entrusting her with managing the strip club). I’m curious as to whether Ruth will really be able to carry out her original plan to rob Marty and then kill him, having come to know him a bit. At the same time, I wonder if Marty at times underestimates Ruth. It certainly looks as though he understands her ruthlessness (haha) but he also treats her with some condescension as he DOES have more knowledge of money laundering and business than she does.

-Other notes:
Charlotte is one of the more underdeveloped characters in the show. Her character is very much Teen Girl, but as you point out, she’s more enjoyable when interacting with anyone that isn’t her family. She seems to have a longing for her old life, and it is clear that she wishes things were different… but I just don’t CARE.
Wendy’s storyline is trudging along, I guess. I, too, can’t imagine how she met Gary to begin with, even though I feel like Bob, Marty’s P.I, mentioned it at some point. I guess not. Either way, it seems that we haven’t seen the last of Josh yet. Perhaps he will go to the authorities. Do the FBI know about Gary Silverberg’s “suicide” being connected to the Byrds?

I never watched Breaking Bad so I can’t even compare it to that. But since you seem to only be halfway through, I won’t spoil anything.

However, I must not that last line for it never really clicked with me. Why isn’t the FBI looking into Gary’s suicide? Especially considering they surely have been tailing Del and had to have found out Wendy was involved. If Gary’s son can put two and two together and wonder why is this woman’s name in my dad’s phone and I hear about her on FB, you’d think Roy would have used that as leverage. Trying to pin a murder on Wendy to make her an informant.

I do believe you found a plot hole (or whatever you would call a road which seems like it should have obviously been taken.)