One Day At A Time: Season 2/ Episode 9 “Hello, Penelope” – Recap/ Review (with Spoilers) 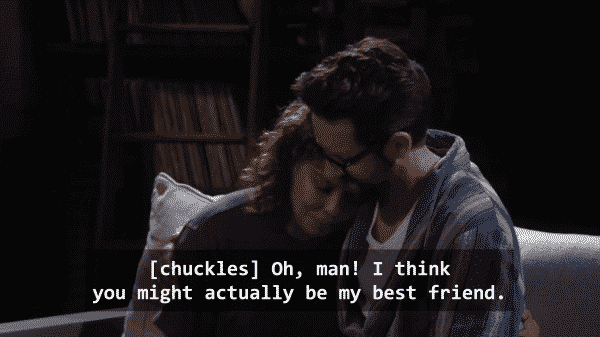 With so many things in life going so well, Penelope decides to stop going to group therapy and taking her meds, leading to her being reminded why she needed those two things in the first place.

Episode Focus: Happiness Makes Up In Height What It Lacks In Length | Max, Penelope, Lydia, Schneider

While things aren’t perfect, for Penelope they are perhaps the best they have been for a long time. She is in a healthy relationship, the kids are happy, Lydia isn’t getting on her nerves, and it feels like time. It feels like it is the time to stop taking meds and quitting therapy. Something Lydia is so glad for because, cultural wise, she didn’t understand Penelope’s need for either and looks at her stopping like she is cured.

The truth is though, she isn’t. Like Lydia’s need for medication to not have a stroke, Penelope’s anti-depressants are made to curb the worst case scenario. It isn’t going to stop her from having anxiety or feelings of sadness, but it makes it manageable. However, like some people who deal with anti-depressants, as part of their regimen, there is this vibe that when things are good, especially consistently, you’re done.

However, as Penelope shows, and admits with great frustration, you can never be done. Leading to a serious heart to heart with Schneider showing how he went from this creepy guy who once hit on her to her best friend. While there may be a lot of things he doesn’t get, when he sets aside being everyone’s comic relief and gets real, he knows all the right things to say and do. Such as taking Penelope’s licks when she says he had to get hooked on drugs in order to be interesting. Does it hurt? Yes. However, he knows her by now. After all, she has been living in the building for 16+ years now. He’s seen her at her worst.

But, what matters here is that, even knowing she is at her worse, and ready to lash out, he’ll open his door to her in the middle of the night and listen. Just as much as Lydia will listen and realize, while therapy isn’t for her, as well as the medication bit, if it helps make her daughter feel happy, or at least stable, she is all for it. Since Lydia can’t take her daughter’s pain away or be a one-woman army with some Vicks VapoRub as her ammunition. She needs every bit of support just like Penelope.

How One Day At A Time Addresses Depression

While, when One Day At A Time, talks about topics like depression, anxiety, immigration and etc., it’s episodic, it packs a punch. It’s depiction of depression especially since, for those who may know someone who suffer with depression, you might be familiar with what Penelope went through. They hit this high to the point it is like, no longer are their meds calibrating their brain chemistry and making things functional – nope, life has just decided to finally return to normal.

The problem is though, and I think this is why Schneider was using his addiction for comparison, you may think you have returned to those glory days before you needed medication or could handle a drink, but then something happens. For Schneider, it would be one drink becoming two and for Penelope, it was a presentation at Alex and Elena’s school going weird to her not wanting to get out of bed, then it evolving to not wanting to eat, and it eventually leading to suicidal thoughts.

Something which can either can hit quickly, or slowly, depending on the person. But what you had to love about Elena’s means of handling it is that she took what she learned in group therapy to try to manage. She used the tools Pam gave her and it helped her realize, she needed to reach out. Leading to us finally understanding what reason Elena lets Schneider invade her life so much. Yeah, he might be a privileged jackass at times, but he means well.

I mean, isn’t that why he is learning Spanish and has just as much an open door policy with Penelope as he expects of her? In a way, unofficially, they are his sponsors. Socializing with them seems to bring the sort of high that drew him to drugs. Also, they present him a safe space to be himself. There is no need to be on something so he can feel comfortable, or even bring a party favor to be accepted, yeah they may not always bounce for joy seeing him, but he is one of the family. And them providing that sense of community, it is what fostered him wanting to be there for Penelope.

But, before we move on, we have to bring up Lydia too. Like many people of color, psychology and mental health isn’t something taken as seriously as it should. While I don’t know Vicks VapoRub to be the be all to end all, prayer is something often brought up. That and downplaying what you’re going through since that person, especially if they are your parent, saying they had it or have it worse. So for Lydia to have her ego and upbringing step aside for the betterment of her daughter, I want to say that was that kind of moment you’d like to see more of like Elena being accepted and love after coming out.

It’s just good for the culture.

The Kids Not Asking Questions Or Seeing Penelope At Her Worst

I must admit, there is a twisted part of me which enjoys characters not only being exposed but raw and unapologetic about it. Take, for example, Victor. A part of me finds myself almost wishing that he came to this weird crossroad where he loved his daughter but his faith was his faith. Then, when it comes to Penelope in this episode, her kids seeing her at her worse.

Which I’m kind of surprised didn’t happen considering she didn’t really leave her room for one or two days and we didn’t even see Lydia address it with them. Their absence was noticeable and stood out. Especially with how reliant they can be on their mom. For, I think the conversation with Max, Lydia, and even Schneider, while important, her talking to her kids about what she was going through would matter just as much. After all, not just for the sake of the drama but the representation, it could present the idea of a conversation which could break the cycle within their family. Not just in terms of talking about mental health, but opening the floor so that, rather than being a family so cagey about negative emotions, or hard conversations, they are more open. More capable of communicating to each other, and significant others, what they are going through vs. shutting down or averting the conversation from the problem.

Something which can either can hit quickly, or slowly, depending on the person. But what you had to love about PENELOPE’s means of handling it is that she took what she learned in group therapy to try to manage. She used the tools Pam gave her and it helped her realize, she needed to reach out. Leading to us finally understanding what reason PENELOPE lets Schneider invade her life so much.

I mean, isn’t that why he is learning Spanish and has just as much an open door policy with PENELOPE as he expects of her? In a way, unofficially, they are his sponsors.