Jamal’s relationship with Abuelita gets him one step further to Rollerwood fortune and with tagging along with Jamal, Monse sees a ghost.

Get You an Abuelita: Jamal, Monse, Ruby, Olivia, Cesar, Abuelita

It’s Halloween! Which, with how things are in Freeridge, it means doing trick or treating isn’t safe and kind of stupid. So, it has become a tradition to watch a scary movie and have pizza at Ruby’s. But, thanks to yet another Monse and Cesar fight, Monse ruins Ruby’s plans with Olivia yet again. But, this ends up being good for Jamal since Abuelita got the name of the girl and she lives in Brentwood – a town perfect to go trick or treating in. Add in Olivia co-signing and Abuelita driving, and they are off!

Unfortunately, though, at least for Ruby, the Monse and Cesar thing makes him the third wheel on his unofficial date and Monse ends up with Jamal. Which ends up beneficial for both. For Jamal, he gets to meet Rosé and after buttering her up about her past on Soul Train

, with a gun in hand, she makes Jamal get to the point about the Rollerwood money. Leading to her dropping the name Lil’ Ricky as Abuelita and Jamal’s next target.

As for Monse, the benefit of this visit comes in two parts. The first is, with Rosé dating a Santos, she clues Monse in on what could happen if she and Cesar ever became official. And from what she says, Monse should have nothing to worry about. Though, with Monse’s, “Not Safe” comment still hitting Cesar hard, she has an uphill battle with him.

Leading to the second and perhaps big thing. Upon leaving, Monse sees a woman who looks like her mom come towards Rosé’s house with two kids. So, needless to say, after Jamal playing 21 questions with Rosé, Monse might be next.

The fact Ruby doesn’t see Monse like a rat-infested with the plague by now is such a surprise to me. She consistently causes issues for him trying to do anything with Olivia and seems to be nothing but trouble. I mean, even outside of Olivia, Ruby having to talk to Oscar was because of Monse more than anything. Yet, I guess he is thinking too much with the head downstairs for the one upstairs to get the memo. That aside, this Rollerwood mystery is becoming kind of interesting. Especially since it interweaves with other aspects of the story and isn’t just Jamal’s thing. With Lil’ Ricky being one of the people who made the Santos major players, that ties into Cesar and Oscar’s story for it gives us a history of their gang in a fun way. Also, through this adventure, Monse got some much-needed advice in terms of dating a Santos boy and saw her mom. A person with two brand new kids and possibly a pretty good life, considering the neighborhood Rosé is in. So that meeting should be interesting.

Cesar being tall, cute, and Cesar is making him turn into a blocker when Ruby needs a wingman. So, Cesar tries to be the wingman Ruby needs but also needs dude to be outside Ruben. Which is a bit of a struggle since Olivia wants to party, go in people’s fridges, and while Ruby is a gentleman it isn’t clear if she wants a nice guy. After all, nice guys are boring since they often think just being a nice guy is all they need to do.

Cesar, on the other hand, when this Straight Outta Brentwood wanksta gets mad Olivia took a drink, he steps to him. In fact, he not only steps to him but when ran off the property, he comes back with Oscar and gets his crew all the candy and juice they want. Which leaves Cesar feeling a certain type of way since he feels he perpetuated the very same stereotypes which got Olivia riled up. 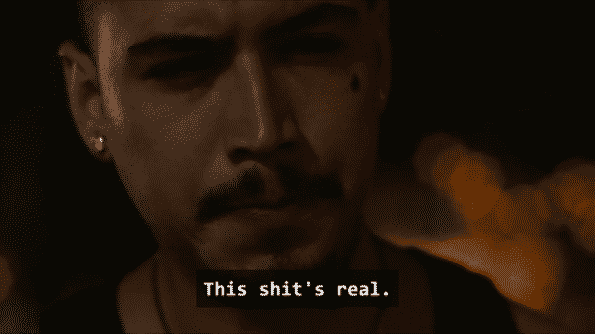 This is why I think Oscar isn’t that bad of a dude. His brother calls, he shows up, and all he does is help his brother and friends take candy. No cop calling type of issues, or asking how come his brother didn’t handle himself. My Lil’ bro calls, I know he needs me and that’s it. No questions asked. In a weird way, it is kind of sweet.

Though, you have to appreciate how the show, similar to The Chi can address topics like catcalling, immigration and racism yet not make it heavy-handed. It’s part of life but not the summary of the characters. Yet, it is still a looming cloud over their heads in a way.

Can You See Me?: Monse, Cesar, Ruby, Olivia

After the events of the night, everyone ends right back at Ruby’s and he is trying to salvage any chance he has with Olivia. However, with Cesar still feeling a certain type of way about how the night went, he leaves before the movie – which you’d think would be perfect for Ruby. However, Olivia follows, tries to console him, and ends up kissing him. Which, at first, leads to Olivia being pushed away. However, then memories of Monse said hit his brain and with him realizing that she wouldn’t probably be safe, better to hook up with a stranger than a childhood friend.

Meanwhile, Monse, after being egged by those Brentwood boys and washing the egg out of her hair, takes a look at that shoebox Ruby pointed out. She realizes by the picture she saw her mom and calls Cesar to talk about it. But, with him making out with Olivia, in front of Ruby’s house mind you, he misses her call.

I increasingly hate love triangles. It is hard to say if it is because they seem lazy or just seem to be too much of a staple. Either way, while I get Mario’s warning in episode 1 should have been considered foreshadowing, I just wished after Cesar pushed Olivia away that was it. The struggle of wanting Monse but not having her involved with the life Cesar feels trapped in was good enough. Ruby finding out Olivia doesn’t want him and maybe testing the waters with Jasmine, seeing how she is as a person, or someone else, could have been interesting.

But, hey, like I say every so often, just because we got different colored faces and languages in play, that doesn’t mean the baseline of the story is going to be all that different. New faces going the same places as the white ones have always gone. Hence why diversity and inclusion isn’t always all that.