Lila continues to face adversity and yet despite being born poor, a girl, and being a girl who is headstrong, she continues her arduous journey.

The closeness, the trust, that exist between Lila and Elena is shown to be deep and something Lila may take advantage of at times. For as fearless as she often seems, she’ll take Elena’s hand to help her fortify her position. This is seen when confronting Don Achille who she believes stole her dolls, as well as convincing Elena to come to the sea with her. Something which may have been to sabotage her, perhaps, in a self-destructive way, push her away like throwing her doll into the basement.

However, even though Lila is a borderline ass towards her on occasion, for the most part, she is the best friend a girl can have. On top of that, arguably, she is Elena’s only academic equal and that mental challenge, intrigues her perhaps as much as Lila’s will. She isn’t alone though. It seems Enzo, the one I believe Lila often teases, takes note of her too. Not to the point of being as bold as Nino and saying he’ll marry her, but he does give her some produce to show his interest. Something she plays off. 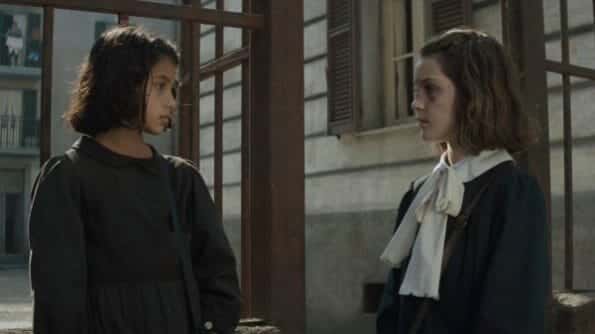 It really is going to be interesting to see how these two are as teenagers. I say that because Lila might be bold as a child but what becomes of her during the teen years? You know, when youth isn’t as easy of an excuse for her behavior and people start seeing her as an ill-behaved woman – for the times. On top of that, you have to take note that as beautiful as Elena and Lila’s friendship seems, Lila does do some things which clearly are in her favor. If not, better said, are things she wants to do and Elena’s safety or person isn’t fully taken note of.

Not to the point I’d say, firmly, she manipulates Elena, but just take note of Elena writing this story out. The way she talks, it is about evening the score and seems like she is getting back at Lila by exposing her in some way. Granted, one could argue the exposure could be her reminding Lila of the person she once was and not who she became. We won’t know the answer to Elena’s true intentions into later in the series. However, you can definitely tell Lila is aware of her power in their dynamic and she tests how much she can get away with sometimes.

As shown in the premiere, Lila is brilliant. She is self-taught in nearly every academic area and what Elena has to study hard to do seems to come naturally to Lila. Hence why Maestra Oliviero tries to push Nunzia to get Lila more time to study for the elementary school assessments so she can go to middle school. Problem is, her husband, Fernando, is a prideful man. One who seemingly doesn’t like the idea of his daughter being more educated than him.

For it is already bad enough the mouth she has but to claim intelligence over him too? Then, to make matters worse, his son, Rino, Lila’s older brother, wants to be paid so he can take care of Lila’s education costs? PSH! It gets so bad he throws Lila out the window in hopes that will shut her up. Yet, as always, she decides, even if she isn’t supported by certain individuals, she will learn and she takes the assessment anyway and gets straight As.

Mind you, this is with missing school since Maestra Oliviero embarrasses her in front of the class and her not getting extra help. Not to forget, her getting the flu and the only thing she did academically being writing a book. Because, you know, what is the flu but a sign you should divert your talents elsewhere right?

As for Elena? She faces the same issues Lila has but rather than her dad, Vittorio, try to be the one to stop her, it is her mom Immacolata. She seems to be jealous of the idea her daughter gets to go to school while she handles all the house chores herself. In fact, her envy comes to the point that when Elena skips school with Lila to try and see the ocean, and she gets caught, she beats her and then manipulates Vittorio into beating her. I’m talking to the point of a black eye!

Yet, in the long run, Elena passes her exams, thanks to her dad financially supporting her education, and getting her extra lessons with Maestra Oliviero. She even bests Lila in one subject.

Taking the words of Jada Pinkett-Smith, when talking about the abuse her father inflicted on her mom, I don’t want to make excuses but paint a full picture. I bring up that disclaimer for I feel like it would be easy to damn Fernando and Immacolata but you have to take note of the time and their finances. During that time, in that part of the world, you were not required to go to school as you are now and the government didn’t pay for it. Also, let’s we forget, as much as there are tall buildings in the town, they don’t live in a city. Not to forget, there isn’t much in the way of social mobility.

Though the biggest issue is time and money, above all. Fernando, as Nunzia notes, is taking care of his children, her, her parents, and an unwed sister. His daughter adding a bill, and her brother trying to push for a wage, that adds onto his stress. The kind which he has no one to alleviate because there is no safety net. He likely knows what happened with Alfredo. Why would he want to be in a position to need a loan and possibly lose it all? Go from having a shop to being something which feels beneath him since he has a trade?

Also, let’s not forget we’re in a time of where men were supposed to be the smartest, strongest, boldest, and etc. So to have a daughter so strong-willed, he probably sees her like a mare who needs to be broken. Otherwise, she may end up like his sister and instead of getting married and being one less financial burden, she’ll have him working until he is on his deathbed. Even though retirement likely didn’t exist back then.

Same goes with Immacolata. Having a daughter who gets the opportunities you didn’t have, maybe even fathom, has to be frustrating. For even if she isn’t educated, she is aware what an education can bring. Just look at Maestra Oliviero. She has independence, no need to marry and have kids to survive, and she is a respected member of the community. What is Immacolata? She has friends and neighbors, yes, but she also has to take care of kids and a man who will contradict her. Someone who, when she frustrated him enough, will hit her. Yet this kid is treated like a princess? He talks about making a way to make sure she gets some kind of fulfillment in life? Yes, a mother should love and want the best for her child but not every mother believes sacrificing their own happiness is a part of motherhood.

Though let’s not let Maestra Oliviero get away with her comments. It’s hard to excuse her calling Lila’s family plebs just because they come from a different situation than her. Well, assumingly they do. I was all for this woman going to bat for Lila, not wanting her mind wasted, but her talking about Lila to Elena crossed the line. Making me hope we don’t see her nasty self for the rest of the season.

Leaving me happy to say, even if Lila didn’t hear what the Maestra said, she got the best revenge of all since she didn’t need her to pass the assessment. Showing that maybe that money spent is more so a side hustle than something necessary. Hence why we only see Elena and another girl’s parents pay for it.

We’re told in the first episode that Don Achille and the Solara family, who own the bar, aren’t on the best terms. They have conflicting business interest, in terms of their more lucrative business(es), which the Solara family has issues with. Leading to why they may be hired Alfredo, who curses Don Achille in the pilot, and perhaps why they set him up, or have him kill, Don Achille.

It’s an interesting thing when things like this are mentioned for you aren’t sure how exactly they’ll influence Lila and Elena’s story. Is this just something that happened, and is noted to tell you about their neighborhood? Do they somehow get involved in the situation and make it better or worse? Could it be the ripple effect shakes their lives in some way? From what we’ve seen, neither Don Achille, the Solara family, or really Alfredo’s family, have much influence over Lila and Elena’s life. Yes, Lila talks about knowing who might have killed Don Achille, but is she really so bold she’d investigate and accuse someone of murder? The answer is yes. Have you not met Lila?