As the president of the United States is introduced, we further begin to understand why the Spree exists.

Table of Contents hide
How It All Began: General Adler
What Happens When Forced To Move Before Ready: General Adler, President Wade
We Must Have Each Other’s Back: Libba, Glory, Tally, Raelle, Scylla, Abigail
Highlights

How It All Began: General Adler

Briefly, and not with what actually happened but a reenactment, we see what led Sarah Adler, now General Adler, to pursue the Salem Accord. A policy that, after nearly being hung, saved her and so many witches but left them in indentured servitude. And, to some surprise, the performance wasn’t just for the witches we know, and the new ones introduced, but rather the public who seem to appreciate what Adler’s army does to protect people.

What Happens When Forced To Move Before Ready: General Adler, President Wade

With it being an election year, it is only natural the president of the United States, President Kelly Wade, would like a major military win to bolster their campaign. The problem is, so it seems, when General Adler is rushed, beyond her weird minions making this snake-like sounds, bad things happen. Case in point, one of Adler’s top people, loses their daughter in a raid in which the Spree uses their magic to drive the young woman’s peers mad. Leading to them attacking her and the woman’s mother so frustrated she has to walk away.

Thus creating yet another example of why dissatisfaction with Adler likely has grown by the decade as presidents, like Wade, have used witches as props and tools and has taken less note they are human.

We Must Have Each Other’s Back: Libba, Glory, Tally, Raelle, Scylla, Abigail

As you can imagine, beyond the Bellweathers, there are many other great witch families, and for Abigail, the rival for her generation is Libba. A young girl who has bested Abigail and outright embarrassed her on more than one occasion. But, while a rival appears for Abigail, for Tally, it is an old friend, one named Glory who, like most people in Tally’s life, questions why is she there?

But, as we see Tally allowed, with other groups, to go to the pageant where General Adler’s story is performed, we see why. She thinks it is to honor Adler’s sacrifice, which she imposed on generations of witches thereafter, and to protect the children and vulnerable. Yet, like any soldier, she finds herself also dealing with those who lack appreciation and, of course, it is a man. Someone who Tally does not present her soft and understanding side to since,

Thus she uses her newly learned skills to send him flying. A move she, surprisingly, isn’t chastised for, even by drill Sargent Anacostia. If anything, it seems the move helps foster solidarity, even amongst those like Libba and Abigail, who have petty little feuds ongoing.

Leaving us to speak on Raelle and Scylla. At this point, it seems the two are smitten, or at least Raelle is and Scylla trying to foster enough loyalty to turn her. Which, through the use of creating multiple personas, she seems to be deepening her bond to Scylla and hopes to soon be extracted. However, whoever is her leader, which represents themselves with a blue balloon, they’d rather her wait, and she has no desire to. Leading them to remind Scylla who is in charge.

Waiting For Scylla To Strike

It isn’t 100% clear what Scylla’s goal is. Is she looking to recruit those who don’t wish to join Adler’s army, to plan a massive attack on Adler’s forces which, based on how Anacostia talks, are lowering in number? What’s the plan here and, when she executes it, will she be alone?

Which, in itself, is probably the bigger question here – For this all could be part of a planned coordinated attack to hit every fort of Adler’s, and not just where the trainees are. If not create the kind of plant which could assassinate the president.

Also, what’s up with the balloon? 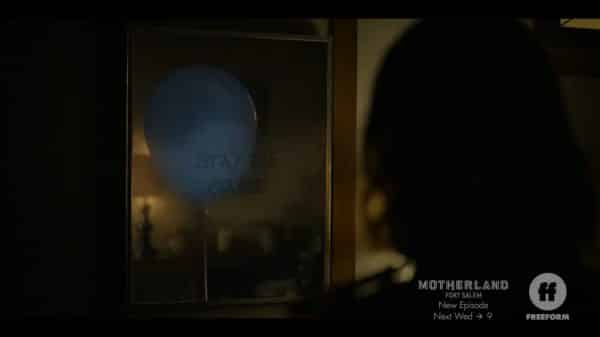 Tally Flinging That Man Away

In the next episode preview, it seems men will gain a stronger presence in this show, and many of the girls will oo and ah over them. Here is hoping they get over that initial spell, and like how Tally sent that man flying, they’ll minimize the presence of men and all the eye-roll-inducing storylines they might bring.

I don’t know what it is about Sarah Yarkin, be it her voice, the way she does sarcasm, perhaps the total package, but she is a potential scene-stealer and her being paired with Abigail’s uptight character is ace. Mind you, the idea of them being rivals due to their families does raise an eyebrow, since we know Abigail’s family line comes from slaves and it does leave you wondering if Libba’s family formerly owned them. If not, at one time, was antagonistic towards the idea of Black people in Adler’s army – who knows?

Either way, she is a welcomed presence, and it’s hard to not be giddy when familiar faces appear in things you already enjoy.

The Birth of the Salem Accord

While the retelling of what happened seems to be made to appeal to non-magic users, having some idea as to what happened, and how General Adler went from nearly being killed to making her people servants of the US military forces, is valuable information. Granted, we’re still mostly getting bits and pieces, but it’s still early on. Sooner or later, there will likely be a flashback, so we can get to know General Adler more, which will allow us to see the lead up to her sister dying and her likely signing the accord to save her own skin, and maybe that of witches who would come later. Though, who knows, maybe she only gave a damn about other witches when they started pushing her to be in a position of power?

With that said, alongside seeing what led to the accord we also get a good idea of why people are not only against that, but General Adler and the conscription. For while there are many like Tally who see it as an honor, we then have people like the woman who said Tally reminds her of her daughter. Also, there are those like Raelle who lost their mothers and while lucky to have their dads, and also people like Anacostia who didn’t have anyone and ended up raised a foundling.

Never mind, while they were a large swath of the early members of Adler’s army, there is a need to question why the Bellweathers, amongst other Black witches, continue to be in the army? Much less, when it comes to the Spree, beyond Scylla, what is their makeup? For with it being established they are operating on a similar history to what we have, you’d think trading one form of slavery for another would be a bigger thing. But that’s just my take.

As Ben is asked to deal with the consequences of his actions, all efforts are made to protect him and maintain the idea he is worth protecting.
Read more
TV Series

As Ben becomes overwhelmed with the truth, he starts revealing it to anyone who can and will listen – including the last person he should say a word to.
Read more