We come to the end of Phase C and it’s an emotional end for Annie. As for Owen? Well, while it lacks emotion he does get to be a hero.

Table of Contents show
1 Code Epsilon: Dr. Gertie, GRTA, Dr. Fujita, Dr. James
1.1 Commentary
2 This Is Goodbye: GRTA, Owen, Annie, Ellie, Grimsson, Dr. James
2.1 Commentary
3 My Guardian Angel: Grimsson, GRTA, Dr. James, Dr. Fujita, Owen, Annie
3.1 Commentary
4 Highlights
5 On The Fence
6 Follow Wherever I Look on Twitter, Like us on Facebook and Subscribe to the YouTube Channel.
6.1 Maniac - Episode List Watch Only on Netflix Season/ EpisodeSynopsisSeason 1/ Episode 10 “Option C” [Series Finale]Maniac concludes with not much in the way of fanfare but Annie, as usual, being the catalyst for a rather sweet moment. Season 1/ Episode 9 “Utrangatta”We come to the end of Phase C and it’s an emotional end for Annie. As for Owen? Well, while it lacks emotion he does get to be a hero. Season 1/ Episode 8 “The Lake of the Clouds”As we get to see the rise and fall of a theoretical Owen and Olivia relationship, Annie is given an ultimatum by GRTA. Season 1/ Episode 7 "Ceci N’est Pas Une Drill"We may FINALLY begin to really address the topic of Olivia as Annie is stuck in the fantasy world of Ellie’s dreams. Season 1/ Episode 6 "Larger Structural Issues"In order to prep for Pill C, the GRTA situation is addressed. Alongside Dr. James’ issues with his mother Dr. Greta. Season 1/ Episode 5 "Exactly Like You"We come to the end of the Pill B arc and, naturally, with it being Owen’s episode, things transition to addressing his issues – like Olivia. Until Annie upstages him. Season 1/ Episode 4 “Furs By Sebastian”The only way to make sense of “Furs By Sebastian” is remembering the point of Pill B is finding a subject’s defense mechanism(s). Season 1/ Episode 3 “Having A Day”Remember Dr. James, from the commercial with Dr. Robert? Well, he is reintroduced and, as a bonus, we learn why Owen was committed. Season 1/ Episode 2 “Windmills”Focusing on Annie helps Maniac rebound from a lackluster premiere. Especially as we learn how and why she got into the trial. Season 1/ Episode 1 “The Chosen One!” The only reason Maniac presents to continue past episode 1 is your loyalty and faith in the actors. Not their characters or the story.
6.2 Maniac - Episode List
6.3 Check Out Other TV Recaps

Simply put, GRTA goes haywire and decides that everyone is going to die. Leading to Dr. James trying to figure out how to turn her off, Dr. Fujita trying to assist him, but also warn what could happen. However, with Dr. Gertie confronting Dr. James about his abilities as a doctor, he realizes the harm he has done to try to one-up his mom and decides this all needs to be over. However, until Owen does what he does, it seems GRTA made sure nothing could stop her. 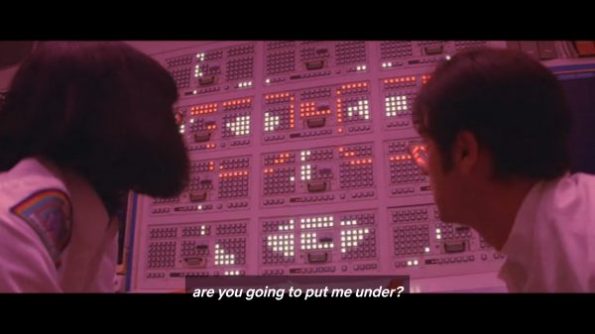 GRTA: Are you going to put me under?

Out of the 882 test subjects over 7 years, we see in Owen’s dream that GRTA had around 5 in comas. So, what happened with the rest of the subjects? If they were cured I’d think the trial would be over and like heart medication, among other things, warnings of death would just be on the label. Though, that is one thing I never fully got about the trial, do the pills matter if GRTA isn’t involved?

Based off what we saw with Dr. Gertie in the last episode, she can do the work without the pills. So what do the pills really do without her? Well, besides put subjects to sleep but considering, while she was having a meltdown, she showed she had the ability to knock people out using the ventilation system, who is to say she didn’t use a clear and odorless gas?

I’m going to speed through a very strange story since it’s the usual nonsense which fills this show’s time. Owen is this Icelandic dude named Snorri who accidentally killed an alien named Ernie. Someone who seemingly was scouting about for humans to kidnap and sell as exotic meats. Thing is, Snorri doesn’t believe Annie, who is secret agent Ruth (per the captions) that Ernie was evil. Add on Snorri apparently has a human body but alien conscious, her moving what looks like a kidney stone through Snorri until it comes out and pops like popcorn, and Owen is self-aware.

Oh, and also there are a lot of people who get shot. Point is, Owen is aware and he eventually forces Annie to be aware, without moving some kidney stone looking thing, and she decides to run off. Why this time? Well, Grimsson, who may not be some evil entity, reveals they, in what is supposed to be NATO HQ, are actually inside some piece of GRTA. And with Annie seeing the room where the twins and the rest of GRTA’s usual entourage are held, Annie decides to run and find GRTA.

Which she does and with that Annie backs out of her deal and is forced to talk to Ellie. During their talk, she lets go and apologizes for all that has happened. Including killing Ellie’s dog, by accident, and being drunk at her funeral. Thus allowing Ellie to leave, with GRTA, who may or may not have learned something from Annie. It isn’t clear because Dr. James is trying to disable her during all this. Here is the thing I don’t get. How did we go from Owen being a hawk and Annie driving away with GRTA to this semi-spy story? While GRTA reveals she doesn’t really have absolute control, there is still the need to question what is going on here? How do things work and as much as I was cool with the simplicity of the show before, when it came to the pills, now I am inching towards wanting some answers. Because with GRTA being faulty, you’d think these worlds would be unstable and falling apart. Not just creating inventive ways for people to kill their inner demons, for a cathartic release, and eventually face the cross they are bearing.

But, at the very least, Ellie and Annie’s goodbye brought enough emotion to the episode where you could get a little teary eyed. Further proving Julia Garner is a show saver. She saved the first season of Ozark and while Emma Stone handled things ok on her own, Garner makes the type of screen partner no one else on the program has shown themselves to be.

So Grimsson isn’t a negative delusion but was telling the truth? Perhaps like some kind of guardian angel maybe? It’s very hard to say since, as deep as we got with Annie, Owen still feels very surface level. What is clear though is, despite Annie showing an example of moving on and talking to GRTA, it’s Owen’s work that shuts her down and allows Dr. James and Dr. Fujita to pull the plug.

. For on top of completing the mission, he makes it seem that he knows Owen needed him to be the brother he didn’t had. However, he isn’t sure if he can stick around further. So after Owen does his thing and Dr. James and Fujita pull the plug, Owen awakens and we wait to see if what he did means everyone will wake up or just him. We see Annie’s eyes moving, and the image for the next episode spoils it, but let’s pretend we don’t know for a second. Grimsson: You always thought of me as the brother you wish you had, right?

Um, Owen handled his issue and Annie handled hers, but what about the other odds? If you didn’t solve your issue, do you get freedom or do you end up catatonic? After all, part of the reason Annie and Owen got the results they did was because they weren’t alone in the simulation. Also, considering how their floors looks kind of weird and freaky, it seems like they were broken. For, lest we forget, Phase C is all about remapping the brain so these people becoming nuts or catatonic doesn’t sound too far off. Especially since GRTA, while it wasn’t established she can be in multiple places at once, who is to say they didn’t take the deal she gave Annie? Maybe went off the deep end with the challenges GRTA presented?

Then with Grimsson, was he ultimately just an imaginary friend Owen came up with to cope? One that he let things get taken a little bit too far with? Because the way Grimsson was shown, especially during the shootout when Frank blew him to bits, he came off very negative. Heck, in this episode, it looked like Owen was still covering for him/Jed. Yet, Grimsson is the reason Owen was able to save everyone and came off quite kind. So to say I don’t get Owen’s progress, or lack thereof, is an understatement.

This includes the whole Grimsson thing which could have been a touching moment, but Grimsson/Jed has been all over the place during these fantasies that it still feels like we’re avoiding the heart of the issue. Even if there is noting how Owen felt like a black sheep and all that. It just seems that wasn’t going deep enough. Especially with Annie exposing her soul.

But, then again, maybe that was the point? That Owen still isn’t ready, still isn’t willing to address his issues, so like he didn’t directly deal with Olivia, but pretended to be a third party, of course his issues with Jed wouldn’t be solved. He is still hesitant to deal with his negative emotions. Hence why he goes to play the hero. Lest we forget, he was ready to skip Phase C until GRTA made it seem she would do something to Annie.