Maniac: Season 1/ Episode 8 “The Lake of the Clouds” – Recap/ Review (with Spoilers) 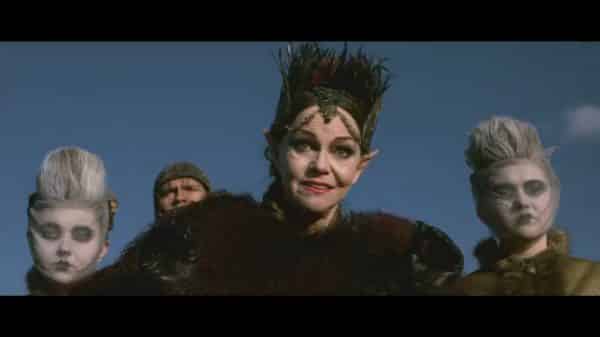 As we get to see the rise and fall of Owen and Olivia, Annie is given an ultimatum by GRTA.

The reason Dr. Greta was brought to the project was to help GRTA, perhaps counsel her. Which is something she does, at first. However, as GRTA confronts Dr. Greta about her issues and makes it seem like she is part of phase C, she screams to be let out and gets her wish.

GRTA: This is all your hysteria, Gerta.

So GRTA is losing it, right? If not has full-on lost it right? Without Dr. Greta taking a pill, it seems like she was initializing Phase C, and the only thing which kept Dr. Greta from being trapped was not taking the pill. With that said, considering GRTA is a massive computer and Dr. Greta but a person, how is she not having a breakdown if GRTA gets overwhelmed just by her simple emotions? Or should we just see GRTA like a teenager going through puberty and all these first causes her to act erratically?

We Were Never Meant To Be: Olivia, Jed, Owen, Frank, Porter

To make a long, sort of interesting conversation, which ultimately doesn’t pay off, story short, a lot happens. We see Olivia address, by talking about her “ex-boyfriend” everything Owen did. He, in turn, makes excuses for himself. Following that, we learn Porter killed one of Owen’s brothers, thinking he is a rat, so Owen goes to the cops hoping it is time for an out. They call their people, who happens to be Jed, and similar to the last episode, but much more blood, we get a lost scene from a Quentin Tarantino movie.

This especially becomes true when Frank comes in with a shotgun, revealing he has been undercover for decades. Leading to him offering Owen witness protection, him convincing Olivia to join him, and them eventually having seven kids. Which makes Owen miserable since they live in some small apartment. So he jumps out the window, which seemingly GRTA didn’t expect, then becomes a hawk to infiltrate Annie’s memories for her voice is in his head.

Let’s unpack the biggest thing because it seems a bit too rushed. When Jed came in and shot Carl and Adelaide, he revealed how he looked up and was jealous of Owen. Wanted his life. Was that GRTA or was that Owen? Because with that being followed by some weird form of happily ever after, it seemed like GRTA was giving Owen what she assumed he wanted and not what he needed. Mostly by taking out all the factors which could get in his way. His family, especially Jed/Grimsson, Adelaide, and rewriting history so Owen could have Olivia.

Which, as seen, didn’t fix anything. But what is also confusing is how, despite being split for once, Owen became a hawk and found a way to go from his world and venture into Annie’s. When it comes to setting up environments, and what is allowed, how much control does GRTA have really? If this stage is about using people’s weaknesses and rewiring their brains, how did she fail with Owen and allow him to enter Annie’s world?

Confront The Pain or Run From It?: GRTA, Annie, Ellie, Owen

With Annie awake, but Ellie still playing the elf role, she just lets it ride until she realizes they do share the same memories, just altered to fit the fantasy. However, as they reach The Lake of the Clouds, it is revealed Ellie knows the truth and is just prepping Annie to accept it. However, she doesn’t. GRTA shows up, in a truck of all things, and convinces Annie to stay and zaps Owen, a non-English speaking hawk, when he tries to get in the way.

Making it seem, despite making progress, Annie is by no means cured.

I’m a bit confused. Owen wasn’t allowed to be with Annie, and neither was Ellie. Instead, Annie is added to GRTA little gang which may or may not have been past subjects. If she accepted Ellie’s death and rejected GRTA, what would have happened then? Would she have made Ellie jump or horrifically die or simply let Annie wake up fully?

Is GRTA simply misunderstood, at this point, or should we just consider her a villain?

For people who are supposed to love unconditionally, families seem to have a lot of conditions.
— Owen

This is so painfully written. There is a difference between being conversational and writing in such a way that is nearly indecipherable. It’s laden with run-on sentences.