In order to prep for Pill C, the GRTA situation is addressed. Alongside Dr. James’ issues with his mother Dr. Greta.

Table of Contents show
1 The Depressed GRTA: GRTA, Dr. James, Dr. Fujita
1.1 Commentary
2 Mommie Dearest: Dr. Greta, Dr. James, Dr. Fujita
2.1 Commentary
3 In The Lonely Hours: Owen, Annie, GRTA
3.1 Commentary
4 Other Noteworthy Facts & Moments
5 Question(s) Left Unanswered
6 Collected Quote(s) & .Gifs
7 Highlights
8 Low Points
9 Follow Wherever I Look on Twitter, Like us on Facebook and Subscribe to the YouTube Channel.
9.1 Maniac - Episode List Watch Only on Netflix Season/ EpisodeSynopsisSeason 1/ Episode 10 “Option C” [Series Finale]Maniac concludes with not much in the way of fanfare but Annie, as usual, being the catalyst for a rather sweet moment. Season 1/ Episode 9 “Utrangatta”We come to the end of Phase C and it’s an emotional end for Annie. As for Owen? Well, while it lacks emotion he does get to be a hero. Season 1/ Episode 8 “The Lake of the Clouds”As we get to see the rise and fall of a theoretical Owen and Olivia relationship, Annie is given an ultimatum by GRTA. Season 1/ Episode 7 "Ceci N’est Pas Une Drill"We may FINALLY begin to really address the topic of Olivia as Annie is stuck in the fantasy world of Ellie’s dreams. Season 1/ Episode 6 "Larger Structural Issues"In order to prep for Pill C, the GRTA situation is addressed. Alongside Dr. James’ issues with his mother Dr. Greta. Season 1/ Episode 5 "Exactly Like You"We come to the end of the Pill B arc and, naturally, with it being Owen’s episode, things transition to addressing his issues – like Olivia. Until Annie upstages him. Season 1/ Episode 4 “Furs By Sebastian”The only way to make sense of “Furs By Sebastian” is remembering the point of Pill B is finding a subject’s defense mechanism(s). Season 1/ Episode 3 “Having A Day”Remember Dr. James, from the commercial with Dr. Robert? Well, he is reintroduced and, as a bonus, we learn why Owen was committed. Season 1/ Episode 2 “Windmills”Focusing on Annie helps Maniac rebound from a lackluster premiere. Especially as we learn how and why she got into the trial. Season 1/ Episode 1 “The Chosen One!” The only reason Maniac presents to continue past episode 1 is your loyalty and faith in the actors. Not their characters or the story.
9.2 Maniac - Episode List
9.3 Check Out Other TV Recaps

From what it seems, despite GRTA being able to handle the first two phases with relative ease, Phase C, the confrontation phase, has always been vastly more difficult. It is even hinted that some subjects have went catatonic thanks to GRTA and she, to Owen towards the end of the episode, hints that she might be collecting subjects. As for why? Well, that can’t be said.

However, what is known is that after 7 years of working on GRTA, she, in fact, made its neuro-core, and is an MIT grad, Dr. Fujita, only 5 months ago, gave GRTA empathy. The idea behind doing so was to protect subjects but the problem is, said empathy led to a love affair with Dr. Robert which was strangely reciprocated. So with his death, as noted in past recaps, she is depressed and in mourning. Even to the point of not wanting to participate in the study anymore.

Yet, a compromise is made. Dr. James badly wants the ULP trials to succeed so GRTA says she’ll help. It’s just she wants to meet the real her. Meaning, the real Greta who is Dr. James’ mother. 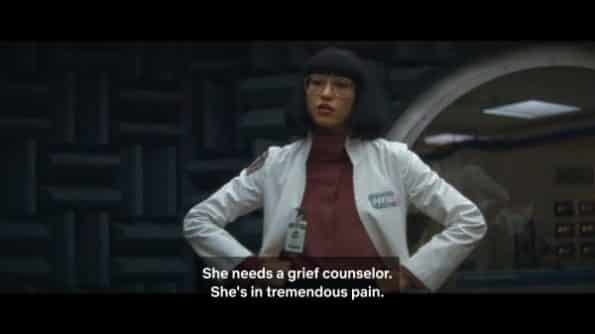 Are the people we see in the subjects’ dreams those that GRTA collected? It is said your dreams are usually filled with faces and people you know. Hence why the friend proxy showed up in Annie’s dream when she was Linda. But what about the rest? Considered there are hints of some patients going catatonic, could GRTA have absorbed what she learned about them and made them into people to be with?

Not to jump ahead, but with Dr. Fujita using Greta’s academic work and us learning, at one point, the real Greta was suicidal and seems to have an unhealthy relationship with her son, could GRTA be evolving to that? Meaning, she is GRTA without the airs and graces, but also without the fame? So a being which tries, but struggles beneath the weight of what loss has done so she clings onto the few who are still around and she feels deeply connected to? Which, for GRTA, are the subjects since she gets to go into their minds and also Dr. Robert?

I mean, it would explain why she keeps some and there was a seance for Dr. Robert in Owen’s dream. He is the only one she didn’t get to bring into her world and coerce them to stay. Dr. Robert had the option to leave and, as noted with the real Greta below, even Dr. James to a point, people leaving seems to be a major trigger in that family.

It isn’t made 100% clear what led to Dr. James and Dr. Greta’s fallout. All that is made clear is that it happened 7 years ago and inspired the ULP project. However, one theory is that Dr. Greta calling out Dr. James’ masturbation habits could be part of the issue. Since, as is becoming clear, Dr. James is very sensitive, likes to seem in control, and his mother exposing him, noting a weakness, that’s a problem. Especially since, when he was 8, and his father left, his mom would sleep with him (non-sexually) and talk about committing suicide. Something which seemingly has created a long lasting impression on him.

But, for the sake of the ULP drug, a clear retaliation to his therapist mother, hence GRTA’s name, he apologizes for what happened and she rushes over. And while they have a bit of a spat as she learns her son is trying to replace her with a machine named after her, designed from her early work as a doctor, she doesn’t make a big deal out of it. Which is a red flag for Dr. James but Dr. Fujita doesn’t take it as serious.

Leading to, after freebasing, Dr. Greta connecting with GRTA and Dr. Fujita hinting she still has feelings for Dr. James. 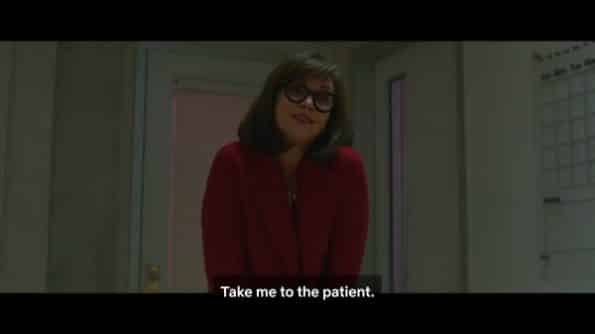 Dr. Greta: Take me to the patient.

What purpose does freebasing have in connecting with GRTA? Simple question. On top of that, considering the mind of GRTA stems from the mind of Dr. Greta, isn’t this a dangerous combination? In GRTA connecting with Greta, wouldn’t it make things worse as she taps into her memories, adapts them as her own, and likely become more screwed up in the process? Heck, considering GRTA can remap a brain, who is to say she may not find a way to bring herself into Dr. Greta’s?

Also, I wonder why Dr. James’ father left and seemingly had little to no contact with his son. I could understand if Dr. Greta made it difficult in his youth but what about the adult years? And before we move on, can we give props to Dr. Fujita for making GRTA’s core system? As well as establishing as smart as she is, and a bit demure in a way, they didn’t make her someone without emotions. Because if this show does one thing well is show women as complex people who seem to have far more control over their emotions than the men who are struggling to keep it together. That is, if they don’t just shut down like Owen does.

With Annie and Owen connected throughout the trial, it seems Annie wants to have a real-world connection. Nothing romantic, just at least them being able to talk about what happened. Maybe have a friendship. However, with Owen knowing he has a problem fixating on people, it seems he wants to keep Annie at arm’s length. In fact, considering how much this trial is mentally and emotionally hurting him, he wants out. GRTA: I’m going to kill them if you go.

Leading him to almost sneaking out during the night but then GRTA starts saying some weird things. She makes it seem between killing, trapping, and things of that nature, if Owen leaves, she will do this. After all, GRTA does have abandonment issues. So, rather than leave, he takes Annie at her word that in the trials, they’ll look out for one another.

I’m hoping we’ll finally address, in full, what happened between Owen and Olivia soon. Maybe what Owen and Annie’s relationship might be in the future. For while Hill and Stone don’t make the most interesting romantic pair, there is a cool enough friendship to want to see them help each other become more stable. With that said, things end with Annie and Ellie, as elves, so it seems Annie will once more, and Stone in extension, make you forget Hill is supposed to be the male lead and not a supporting character.

[…] doesn’t seem to make much sense to me to be telling people what’s wrong with them before they can figure it out for themselves.
— 7