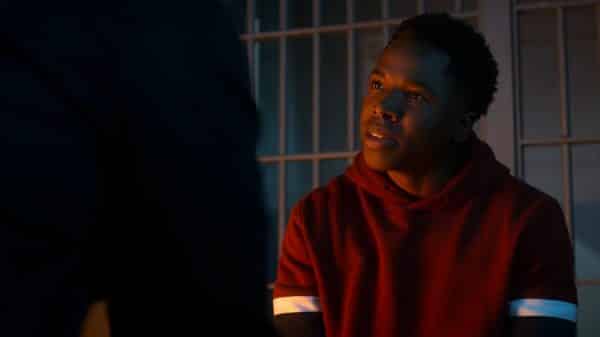 As Lucifer comes to a crossroad, Amenadiel faces what the future may hold for his son, and we finally get an episodic story worth noting.

After Dan and Ella hooking up, things are very weird between them. Leading to Ella being extra, especially around Chloe, and Dan having to worry about that and it being known a cop revealed Lucifer’s name to the criminal in the last episode. The one who sent a hit squad that nearly killed Trixie. So, needless to say, Dan is feeling a bit of guilt.

However, someone not feeling any guilt is Maze who decides to, as Eve tries to make things work with Lucifer, use her to get a sense of connecting to someone. Which Dan calls out, since he decides to strangely drink at Luxe, vs. the many bars in LA, and picks with Maze in hopes she’ll beat him up. However, while into punishing people, she realizes Dan would suffer more without getting beat up, so she leaves him be.

While Lucifer isn’t really a political show, and its depth doesn’t extend beyond the celestial beings having issues with human emotions, it decides to talk about police brutality, prejudice, and circumstantial evidence. Making for the rare moment when you have to address the case of the episode for it seems like it is made for more than Lucifer’s puns or to flesh out his latest therapy session. But, funny thing is, this case ends up having little to do with Lucifer and instead focuses on Amenadiel.

The skinny is, a boy named Caleb goes to a prep school where he is likely one of the handful of people there who aren’t white and middle class. Because of that, he doesn’t really have friends so he seeks connection in his urban, poverty-ridden environment and hooks up with a local drug dealer. One who uses him for his prep school connection but Caleb wants out. This leads to him wanting to ask Lucifer for a favor, because even teenagers from the hood apparently know Lucifer, but him coming across Amenadiel instead.

This leads to Amenadiel taking the kid under his wing, not literally, and getting a taste of what it would like to be a father. Which, frankly, horrifies him for while the conversation is good and getting ice cream is fun, then there is LAPD being rough with Caleb, pointing their gun at Amenadiel, and Amenadiel coming to terms of what it is like for Black humans in Los Angeles. Leading him to question if he may really want his son raised amongst them.

Who Am I Really?: Lucifer, Chloe, Eve, Linda

As seen throughout the season, Lucifer is having a bit of an identity crisis and is now coming to the point of being unsure what is driving him more insane? Is it Chloe pushing that he is better than he has acted recently? Could it be Eve reminding him of who he once was? Heck, even his dad is brought in since isn’t that could also be what is causing him to go mad.

And of course, Linda is part of all this. He tries to use her to find ways for him and Eve to break up. Becomes his go to when he hits rock bottom, and yet he realizes all he can truly do is sternly break up with Eve since she can’t take a hint.

Amenadiel Experiencing What It Means To Be Black

While Lucifer has occasionally had its moment of social relevance, it is far and few between. Thus making this deep dive (deep for the show anyway) into the Black experience in LA surprising but welcomed. In fact, it pushes you to wonder why must every case exclusively appeal to Lucifer and not reach out and affect other characters on this show? It should be noted Caleb isn’t the first time this has happened, as I believe Ella’s backstory was fleshed out due to a past case, so why does this feel like such a rare thing?

All things considered, Maze and Eve seem perfect. Both aren’t exclusive to any specific gender, Eve wants excitement, to be part of violent acts, as well as someone who is ready to commit, and Maze likes violence, sex as much as Eve, and wants a personal connection to someone. So while Eve is stuck on Lucifer, one can only hope she may see Maze there, and Maze is still interested when Eve comes around.

A Case Which Reverberates Across Multiple Episodes

The fact a case from episode 6 is still affecting episode 8 is shocking but also exciting to me. Since, as said in episode 7, most shows which use cases or patients to flesh out an episode have everything wrapped up in a single half hour or 60-minute set. Often times making it, unless the guest actor is just that damn good, them being forgettable and barely worth taking note of.

Yet, between what we get from Caleb this episode, and Julian’s involvement in the past, it seems the show might be compensating for Dan and Ella’s weak storylines by making the guest more poignant.

Can’t Ella Have A Better Storyline?

I get Ella is supposed to be a counterbalance to how serious Chloe and Dan are, and a grounding force compared to Lucifer, but does that mean she doesn’t deserve a quality storyline? We know about her criminal history from past seasons, and in this season it seemed her issue would be a crisis of faith. Something touched upon each episode, but not given the weight it deserves. Plus, considering Lucifer was flirting with the idea of revealing the celestials to Ella, it could have been interesting for him to take notice of her wavering faith and perhaps, as some weird attempt to get it to rebound, push her to know the truth.

Which I’m not saying would be the best storyline, but it would be better than pushing her with Dan just so something would be going on.

I find myself flip-flopping about Dan’s downward spiral. A part of me enjoys him being troubled, if only because it makes him vaguely interesting. Yet, with the likelihood of him being written off or in jail minimal, I know I can’t take anything which happens to him seriously. Making all this probably, like Ella’s storyline, not something which will get fleshed out much and is just something for Dan to do as someone tries to figure out what is there for him beyond mourning Charlotte.

Lucifer Questioning Who He Is

While nothing new, there is a need to question how long can Lucifer really have a conflict of who he is? I understand he spent thousands of years being a torturer and living up to his legend, making this change in the last few years a bit drastic. However, the way it is being handled just doesn’t come off that appealing. Maybe because we’re so used to seeing Lucifer as silly, and the tone of this show, it makes it hard to take the whole thing seriously? Either way, one can only hope by the finale he is clear on who he is and stops the madness.

Lucifer Questioning Who He Is - 75%

A Case Which Reverberates Across Multiple Episodes - 80%

Amenadiel Experiencing What It Means To Be Black - 86%

As we get a second notable case this season, one which pushes Amenadiel to reconsider raising his son on Earth, we get some compensation for the less desirable parts of the show. Such as Dan and Ella’s storyline and Lucifer’s crisis which gets ruined by the tone of the show and Lucifer’s personality which ruins how distraught he likely is.