It might be the beginning of the end for Lucifer and Chloe, especially if she can’t accept who he is wholly and not just the devilish figure she came to like, maybe love.

Dan and Ella are probably at the lowest point we’ve ever seen either. Dan, due to Charlotte’s death, is pessimistic and slowly becoming that semi-corrupt cop we met in season 1. Then, when it comes to Ella, her faith is at such a low point she takes the cross off her neck. But, while there might be hope for Ella, with Maze aiding Dan on a case, enabling him even, it seems he might be walking down a road which might leave him more scared than Charlotte’s death.

With Linda being single for quite some time, it makes the idea of everyone, Amenadiel especially, so invested in her baby uncomfortable for her. Be it because she doesn’t expect them to stick around, be of much help, or maybe the fear that their angel/ demon drama may lead to the baby being hurt? At least, those are long term fears. Short term she just doesn’t want anything beyond a friend to be there. Not people to plant worries in her head.

As for Father Kinley? Well, despite trying his damndest to fool Lucifer, he fails. However, he does weaken Chloe and Lucifer’s relationship by showing Chloe to be a liar and exposing her for what she once planned to do.

Take Me As I Am: Chloe, Lucifer

Leading Lucifer to ask what he’s wanted to since the season began, can Chloe accept he is the devil? To which the answer is no. She can try, is trying, but the problem is that she is conflicted between the person she knows and the entity who we’ve all been taught to fear and hate. Leaving Lucifer, who is honestly too old for Chloe’s back and forth, done. Maybe not done being Chloe’s partner or friend, but definitely done pursuing her romantically.

Talking about your issues is your first step to dealing with them.
— Lucifer

The End of Chloe And Lucifer 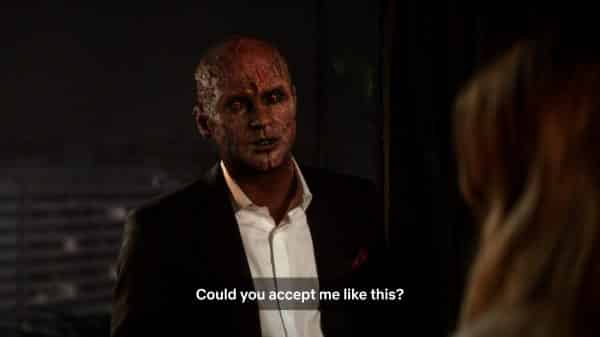 We’ve spent a good 3+ seasons asking will they or won’t they and while they may end up together in the long run, putting a real pause on things seems overdue. For while we’ve seen Chloe date and look into other people, Lucifer has basically been pining for her since day 1. And while, yes, he has slept with many a human, he hasn’t found much in the way of connections. So between Eve and who knows who else, here is hoping with these two splitting that Lucifer may, as Amenadiel mentioned, connect with humans on a deeper level than before.

Dan going back to his old ways, bringing a human into the rough and tumble side of the show, is a welcome change. Also, with Father William Kinley showing himself as a rogue priest, it leads you to wonder how desperate he might be to prove Lucifer is the big evil and expose him? Heck, to try to expel him to hell even?

With Linda, the problem for me is that this pregnancy came out of nowhere and it isn’t clear where this could go. Is she going to give birth to the villain of season 5 or will this be a normal baby? Yet, even with being pessimistic about the child, with her talking about how used to doing things on her own she is, it does open up her personal life in a way which we don’t see too often with the character since she is usually doting on everyone else.

Dan Getting Closer To Maze & Ella I just don’t want Dan to end up dating Ella or getting intimate with Maze. Nothing about Dan’s chemistry with any character has made him an interesting love interest, and I hope they focus on him being a bad ass and balancing that out with being a father. Plus, with Ella’s current spiral, I don’t want that to be derailed by her dating someone like Dan. Then with Maze, I think her relationship with Trixie, maybe wanting to experience having a child vicariously, perhaps out of jealousy of Linda, would be better than a Dan relationship of any kind – including sexual.

With Lucifer and Chloe ending their romantic pursuit of one another, this opens the doors for new storylines and people. Add in Linda opening up, Dan going rogue, as also Father Kinley, and so ends cleaning up what went down in season 3 and season 4 truly beginning.