Can Chloe be trusted anymore as she finds herself in bed with the Catholic Church?

The Chicago fire, Nazi Germany, the way Father Kinley paints Lucifer, he has taken vacations to Earth many times and has rarely brought good fortune to humanity. Heck, Lucifer himself notes he hanged out with Attila the Hun back in the day. Which leads Chloe to wonder who is Lucifer really?

Yes, he is charming, a friend to her, but also the Father pushes her to believe she is being manipulated. So, using a vial filled with dust or some liquid, she is expected to subdue Lucifer so he can be exorcized. Meaning he’ll either be banished to hell or maybe even killed permanently. 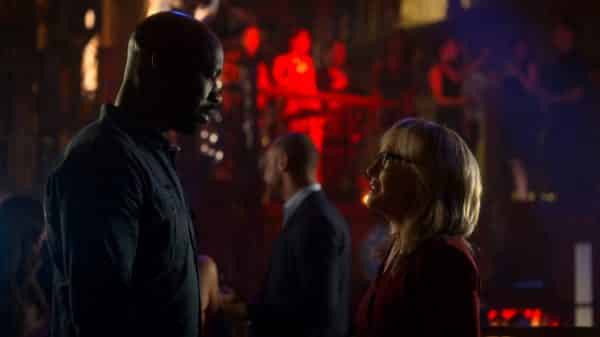 While Amenadiel has committed to staying in LA, he is having the issue of not knowing what to do in LA. He’s used to being a tool, having a purpose, a task, but with a sense of free will and not knowing human social customs well, he feels a bit aimless. Luckily for him, Linda reveals she is pregnant and as if a sign from God, he feels like he has something to dedicate his time to now.

Which likely means he is about to drive Linda crazy.

What Does Your Faith Tell You?: Father Kinley, Chloe, Lucifer

Chloe keeps going back and forth over drugging Lucifer, and with Father Kinley whispering in her ear, every time she sees something positive about him, there is the question if she is just being naïve. If not seeing what she wants to since she is still dealing with the shock of it all. But, after a certain point, it seems she comes to realize that after 7 years of trying to figure out how to handle Lucifer, the International Association of Excorcist, which Father Kinley are part of, are just using her. As Father Kinley notes, they have no concrete proof that Lucifer remains evil or that he is incapable of change. However, what they do know, as does Chloe, that the only way to banish him is with her help.

Unfortunately for them, she decides to ultimately not help them. Leading to Father Kinley to speak to Lucifer and we’re left to wonder if he may expose Chloe trying to help him. If not be the first to explain why Chloe may have the ability to make Lucifer vulnerable.

Bringing In A Church Element 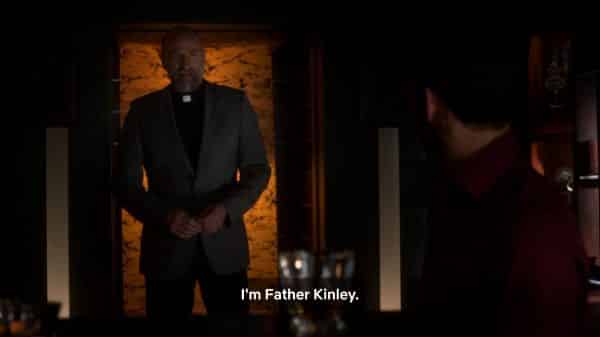 Ella introduced a more religious tone to the show with her introduction and while she speaks about faith, in terms of Lucifer, the figure, she hasn’t been damning. So with Father Kinley, who clearly is a Catholic priest or some clergy member, we’re getting a direct conflict of religious text and the Lucifer we’ve come to love. All of which has rather good timing since, thanks to the way network TV handles things, we’ve seen dozens upon dozens of episodes so, like Chloe, we feel like we have a good grip on who Lucifer is.

Yet, with the idea he was involved with Nazi Germany, and perhaps other calamities in history, maybe due to doing favors, it presents the need to question can he truly be redeemed. If not forgiven for what he did to humanity in the past. Also, there is a need to question how many of these vacations has Lucifer had and what led him to go back to Hell? Is Chloe someone who is reborn once a generation and used to send him back or is something else going on?

Outside of having a time slot that didn’t work for us back in the day, another reason Lucifer was dropped simply was because the cases are kind of sucky. For like most episodic tv, the guest stars aren’t given the best stories and while you have to appreciate them getting experience and having a moment, it’s rare for Lucifer to have guest stars (if that’s the right word for one-off characters) who you want to see become reoccurring. Hence why they probably will not be mentioned in these recaps unless a case seems like it is more than just fodder for Lucifer to make puns.

Um, like with Dan, noted below, there was a need to question what are they going to do with Linda this season? She’s always had a place as a therapist, but when she has stepped outside that role, it has been a bit awkward. Like her trying to fight Maze. Not to say her awkwardness isn’t usually comical, but it is like they recognize the actress can do more, they just aren’t sure what more she should do.

So with this pregnancy thing, it works for Amenadiel, who probably has struggled as much, if not more, than her, but it’s hard to get excited for what may happen with this. 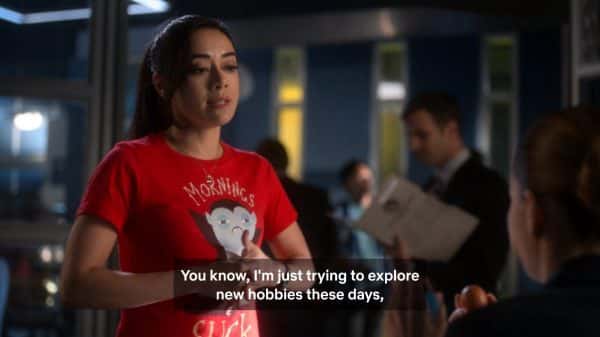 I just want to see Ella have a life outside of the lab and crime scenes. This is an hour show which has less characters than many of the other ensemble shows we watch. So for Ella to be so contained seems weird to me. Leading me to hope they either explore her faith more, give her a personal life, or maybe bring in her family. I mean, she lived an interesting life before getting in forensics so while we’ve already visited that in past seasons, how about bringing someone from her past around as a friend, love interest, or something.

While I get Dan is in mourning and lashing out, it’s not like his character hasn’t been hanging onto being Chloe’s ex, and Trixie’s dad, to justify him not being written off. So here is hoping they just pair him with Amenadiel, who likely will have questions about raising a human, to justify his screen time. Especially since it seems he wants to avoid Lucifer, who was one of his best screen partners. Bringing In A Church Element - 85%

With Catholicism coming to Lucifer, it presents an interesting challenge between the mystical figure and the Lucifer we’ve come to know over 3 seasons. Yet, while that boost is putting Lucifer and Chloe in a good spot, there is the question of how will they make the rest of the cast appealing despite lukewarm storylines?