Love Is decides to end its first season by playing a trick on us and not having the people you expect to flip out decide to storm off.

Blast From The Past: Derek, Nuri, Yasir

Derek, the guy who was Nuri’s top guy before Yasir came into her life, he pops up with flowers and a ring! Seemingly, he has sowed his oats, worked through his ho phase, and now he wants to settle down. Problem is, Nuri has moved on. Yet, being that Derek isn’t the type to take no for an answer, because how could anyone reject him? He leaves the ring with her and asks her to think about it. Which would come off smooth but, Derek is a pompous a**hole.

But, with Yasir seemingly more secure than ever, let it be known he said Nuri should meet with Derek. Get closure. Not knowing that meeting would plant a seed for an argument which grows roots and grow a nice, thick, trunk. How did Yasir go from the dude who, when Keith called or showed up, he flipped out, to now being slightly perturbed but not flipping out? I understand, after the last episode, he realizes he can’t use his usual methods on Nuri to get back in her good graces, since it may trigger something, but still. Because, we are fully aware that Yasir has multiple intelligences. The man isn’t just book smart. Yet, when it comes to his emotional intelligence, that is very inconsistent.

If not, going into Nuri’s trigger of being molested as a kid, he is able and willing to see and discuss what is going on with you but, turn that on him, and he is silent. So, could it just be, Yasir not only felt his hand was strong enough, but perhaps he had Nuri in a place where, after all she went through with him, he figured there would be no way she’d leave him now? If so, it really does complicate trying to like this dude. For it really does push this idea that he is not so much someone who loves Nuri but loves what she can do for him. And, I know, his ego made it seem like he can’t deal with her giving him everything. However, what if that was BS?

Think about it. When it comes to two of the exes we’ve met, he used them. His ex-wife he is using to take care of their son, alongside his mom who, because of her great expectations, enables him to do as he pleases in LA. Then with Ruby, her going to LA with him provided a safety net. The same kind he had at home. And since he had that safety net setup, but recognized she may cut it from beneath him, he went onto his next mark. This girl who, with his suave talking and hip movements, he could get everything he needed to find and better himself. With her thinking she is getting something out of it. Love, maybe reconciling with the issues she had with her dad, or something else.

We All Need Somebody To Lean On: Sean, Ruby, Yasir, Nuri

And to prove Yasir’s game is strong, we need to go over two things. First, he gets Nuri to propose to him. For despite all he has put her through in the matter of a few months, she is fully spring and can’t imagine her life without him. Yet, is still capable to drive him over to his ex’s apartment, to spend the night, under the guise he is going to pack his stuff.

Now, don’t get me wrong, I was not expecting Yasir to get one last screw out of Ruby. Also, I get the idea was he was going to pack overnight to meet a repair guy at Nuri’s the next day. It’s just, Nuri straight out talks about how uncomfortable she is, even after the proposal. Calling Ruby his other girlfriend, and things like that. It’s like… GIRL – IS YOUR WOMAN’S INTUITION JUST NOT CLICKING?

Luckily for her, Ruby has moved on and is busting it wide open for some dude on the living room floor. The dude who Yasir and she was supposed to meet because he wants in on her yoga tape. Seemingly though, he just wanted in and Ruby was happy to oblige. But, that whole situation goes left because of a prayer mat. Out of respect for Yasir, they go into the bedroom and out of disrespect to both, over a prayer mat, which we aren’t told ever had real significance, otherwise, he would have been came for it, he bangs on the door. Thus interrupting whatever Ruby and her man were doing and, naturally, Ruby’s new friend gets in Yasir’s face. So, Yasir being this dude who goes from understanding, but not necessarily vulnerable, to some kind of hood negro, he starts a fight.

One which, if it wasn’t for Sean, Yasir might have ended up in jail. Luckily, Sean, who was taking boxes at the time, got him out of that situation. Leading to that coffee shop where it all started and them talking about the BS which happened. Something that acts as a lead-in for Sean talking about wanting to leave Camille and even move out. Which Yasir kind of iffy supports but that wasn’t enough. Sean has been down for Yasir through a lot of his nonsense over the past few months. He makes it clear that he needs some reciprocity when it comes to him progressing like his boy has. So Yasir puts some oomph into his voice. 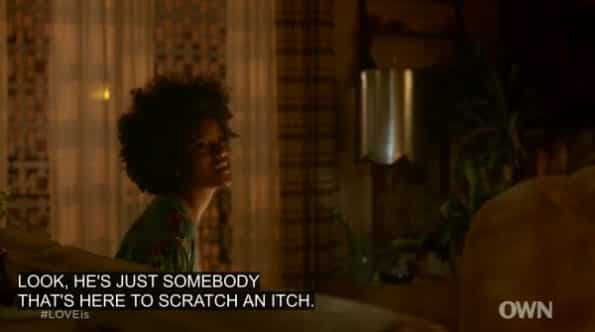 Was Yasir mad his backup plan was moving on? Sorry if I keep painting Yasir like he isn’t s*** but is he? Because, dead ass, why is he waiting until the last minute to pack? Assumingly, you had a key to Ruby’s all this time, multiple days Nuri has lent you her car for the day, so what was your excuse? You wanted to make sure Nuri was firmly under your spell or something? It isn’t like you have a huge amount of stuff. We saw this dude packing a trash bag of clothes. Not containers or all that, trash bags of clothes and maybe a crate or two of records. Are you telling me, over the weeks that have passed, you couldn’t have moved that stuff? Was your hold on Nuri not reliable enough after she broke all her rules for you?

I mean, maybe I’m jaded as hell but I sometimes really don’t get Love Is. To the point I really need to find every interview I can from the Akils to see what is the truth, embellished, and was just made for TV. Because they both are pushing a side-eye right now.

Relationship drama aside, I gotta say I do love Sean as a character. He is like a less, if completely un-pompous, Yasir to me. Like him, he just wants better for himself but doesn’t seem to have that same ability to use people’s shoulders to stand on until he reaches the level he wants to be. Hence why he keeps trying to appease Camille. He is trapped between obligation and his own desires and dreams. Heck, maybe the whole purpose of Sean is to exhibit what would have happened if Yasir never hitched his wagon to Ruby. Makes sense don’t it? I wonder if Angela is supposed to represent what would happen if Nuri wasn’t so… I don’t wanna say gullible or naive. More so, willing to give the benefit of the doubt – even in the face of knowing a situation does not work in her favor. Usually, I don’t split the 90s and Wiser version of the characters, but it has become necessary. You see, that ring Derek gave Nuri, she rejects him, and his proposal, but kept the ring. Something Wiser Yasir didn’t know since – AHA – he never found it, like I’m sure most of us thought he would. So that reveal messes him all up.

I should note though, Nuri felt a certain type of way too. For in Yasir’s script that he was working on, months before he met Nuri, she reads it and realizes Yasir has been using a character’s dialog LINE FOR LINE! Which upsets the hell out of Nuri for she feels played yet, because Love Is apparently foolish, she gets over that fairly easily.

All I want to know is, considering how badly Wiser Yasir flipped out over Wiser Nuri still having the ring, does that mean they’ll leave that room and get more screen time in season 2? That’s all I wanna know. For Wiser Sean and the rest I’d love to see. This show already ruined us knowing things will be fine for 90s Yasir and Nuri so future drama might just be what this show needs. Addressing the problems the Akils, in modern times, have.

I don’t understand why Yasir never thought once to ask Nuri to marry him nor do I understand his reasoning for moving elsewhere.

And we all need to know was the end scripted or real life in regards to Yasir not knowing the details of the ring?

As a lesbian I can relate to love at first sight. Believing in The happily ever after even if that comes with rightful doubts. Is it so hard to believe that two people who are tired of the bullshit canes of dating cross each others paths?!? I truly believe that Yasir sees something special in Yuri because of her kind and loving unconditional heart. Love at first does exist. I’m here 12 years later going strong, My partner and I are true testaments to this!! If you do away with the bullshit and just be real!! When you know..You know!! I love this show it truly touched my heart. I can relate to both Yasir and Nuri as I have been in both positions in life.

I’ve always been skeptical of Yasir. Maybe it’s just the hater in me, or the “wiser” in me. Either way I’m rooting for 90’s Yuri in hopes she realizes she is just doing too much too soon. I’m like “Girl, you acting like a love sick teenager falling all behind that man.” However, I can see his appeal, but I just don’t trust or like how he comes across as a condescending a-hole. I love Angela and how she calls him out to Yuri. Like “N***a, you are not that deep. Get you sh*t together and stop relying on the women in your life to take care of you.”

first of all i’m at my desk screaming at ALL Of this.

” he just wants better for himself but doesn’t seem to have that same ability to use people’s shoulders to stand on until he reaches the level he wants to be” <— REAL TEARS.

"Yasir, in general, is such a polarizing dude. There are times when you wonder, as much as she sweet talks and mesmerizes Nuri, is he doing the same to you too?" <—– THIS is deep because I was in a trance too until this article pulled me out of it.

The only thing that has kept me believing in the genuineness of his love for her is the fact that they are together and thriving now. please continue writing these this was an amazing review.

Thank you for the compliment, and will do!