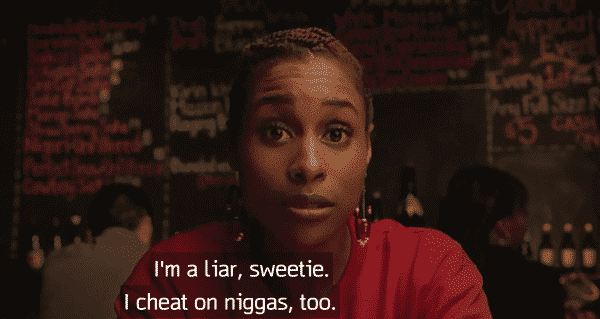 Insecure returns and Issa is still recovering from Lawrence walking out on her cheating behind. But she is “Hella Great” otherwise.

Actually, that is a lie. Molly finds out she is getting paid less than this white boy who isn’t really trying to put in any serious work. Then for Issa, We Got Ya’ll is trying to penetrate the high school market but is failing.

Can I just ask why Joanne keeps having Issa go to all the urban schools? Why can’t she be given an easy assignment in the suburbs? Granted, she did well with the last school she was at, but why is it when Kitty and them fail, and are ready to give up, they get the easy assignments right after? The side eye is strong on this one.

As for Molly, I don’t even know where this pay gap issue may go. Is she going to follow the white boy’s advice and speak on it, get a new job, or maybe even seek out a promotion? As shown, she is a bomb ass lawyer that puts in the hours but it is starting to become clear that the culture may just not be for her. Though with all the time she put into that place, can she let go?

Seems like something she can talk to her therapist Dr. Pine (Denise Dowse) about. Since she is avoiding the subjects Issa told her to go to therapy over.

This day dream is what leads me to question her interaction with Lawrence that follows.

Issa is trying to date but, even with it being months after Lawrence dumped her cheating behind, she can’t find someone who measures up. Though, one could argue, that is because she is searching on dating apps. But she isn’t alone in a vitamin D deficiency, Molly too isn’t getting any. But with her, it is by choice.

As for Lawrence? He is living his best life. Granted, he seems to be treating Tasha as a weekend pump n’ go and is sleeping in Chad’s living room, but we know Lawrence ain’t S***. However, when Chad makes him aware of it, he decides to try to do right by Tasha. He takes her out on a date and it seems they may actually become a thing.

That is until he possibly cheats on her[note]It isn’t clear if they just fooling around or official, but I wanna claim this as cheating. If it happened.[/note]. I say possibly because, when Issa tells Lawrence to pick up his mail, he comes over and pulls a pump and go with Issa. Well, at least it seems that way. For it could have very well been a fantasy of Issa, but one can’t be entirely sure. Either way, real or not, Issa still has hope.

And this “What just happen?” face doesn’t help.

It’s hard sometimes to be #TeamLawrence in the post-Issa cheating world. If only because you know that negro is lazy. He, in my mind, is the type whose mom probably had to threaten him with putting him out on the street to get his own place. Which is the character flaw which allows him to stay in Chad’s spot, hopefully paying some rent, but seemingly not really hitting the pavement to find a place.

But it isn’t just that which makes it hard to be #TeamLawrence. The way he is treating Tasha gives me serious pause. For one, Tasha seems like a nice girl. The kind who deserves an actual relationship and not having Lawrence come on weekends to smash then bounce on Sunday. And when it was revealed they don’t even go on dates? I was ready to turn my #TeamLawrence card in.

For while Issa cheated, at least before that she was a good girlfriend. Lawrence on the other hand, in the early stages of his relationship with Tasha, has some F*** boy tendencies. And while Tasha may be smiling and seem cool with it, you know she isn’t. She may be happy to be chosen for now but I definitely think will be asking for commitment later. Especially in the form of defining the relationship.

However, with Lawrence turning into a man hoe, who knows where he may end up. To be honest, I hope the negro gets caught and smacked the hell out of by Tasha and Issa. With a good kick to the balls by Kelli, it being videoed by Tiffany, and Ahmal (Jean Elie), Issa’s brother, getting a swift kick to the guts in. Because, you know what, screw Lawerence. I’m #TeamTasha at this point. She is the only one who, didn’t do anything wrong here