In “Quiet and Nice,” the focus is shifted to Yasmin as she takes account of her life, and the progress of Harper’s.

From what it appears, Gus is in an entanglement at home. Robert lives with him, has relations with him, yet there is also Theo. Someone in a full-on relationship with a woman, yet can’t get enough of Gus. It isn’t 100% clear why, but based on Gus’ ambitions, which include becoming prime minister, he is quite the catch.

However, news at work may force him to adapt his life itinerary.

A Shift Towards An Unfavorable Direction – Lucinda, Gus, Sara With Hari’s death comes the IBD team experiencing a shakeup. If not, instead, being shutdown and Gus going to CPS. As you can imagine, going from an upstairs office, based on analytics and data, and then going to the floor? This is considered a significant downgrade for Gus. Especially since he specifically applied to work in that division.

But with his boss, Lucinda, already being transferred elsewhere and Sara, one of the top bosses, being firm and annoyed that Gus even questions her decision, Gus has no choice. At least if he wants to remain at Pierpoint.

Yasmin’s life may not have been a struggle from the outside, but with a highly critical mother, Azar, follows the idea that you have to work twice as hard and questions her daughter becoming a sandwich girl, things are a challenge for Yasmin. Add in Robert being flirty, Yasmin’s so-called mentor Kenny being a bit of an ass, potentially a creep, and it just makes life so frustrating.

Heck, add in Yasmin’s boyfriend Seb not necessarily being where she needs him career-wise and not having sex like they once did, and it makes Robert’s attention appreciated. Not enough to cheat, but still a friendly reminder of who she is.

Though it isn’t until a dinner for the graduates that things change. For it is in that moment that Yasmin really sees Harper beyond whatever rumors and gossip there is about her. Since, at a distant, Harper seems lucky. Eric takes her to meetings, Daria introduced her to a client that led to her sealing a deal, and she is progressing nicely while Yasmin, as an initiation, is getting food and drinks. It seems unfair.

Yet, what Yasmin comes to learn is that Harper not only has autonomy but support, and that’s the discrepancy. Something that is only seen after Harper sticks up for her, partly to atone for remaining silent during a meeting Eric brought her onto. This leads to the two young women talking, and between feeling empowered and making a friend, Yasmin feels good about the chat. Heck, she even decides to sublet her place to Harper, who is facing a housing issue.

Oh, and to shut down Robert’s interest in her, Yasmin sends a picture of Seb eating her out to him.

There is something to watching a person on a journey and feeling part of it. Harper got a big win in the first episode by being bold, and Eric supporting that. Yet, changes like that just don’t take on the first go, and you keep running with it. For as much as Harper is bold, clearly capable, and can excel, she still needs molding, and one press or cut isn’t going to change who knows how many years of life.

So seeing that shift from being quiet in a meeting in which Eric was flailing to sticking up to Kenny and defending Yasmin in front of all who could determine her fate at RIF, that is notable. Heck, commendable and astonishing. Yet, these are just steps and not leaps. Though with Gus now competition, maybe a leap might be called for.

Presenting someone who is an immigrant yet isn’t in the struggle and seems connected to their culture is a wonderful thing to see. Also, getting to understand Yasmin didn’t allow herself to be the salad, sandwich, or coffee girl but rather it is part of “initiation” is comforting. Especially since, from the perspective of Harper’s episode, you’d be led to believe Yasmin made herself small to fit in.

Which, if that was your thought, you wouldn’t be wrong. However, rather than envy and hate from afar, embracing Harper could do wonders for Yasmin. Particularly if they grow as close as the show’s trailer hints to. 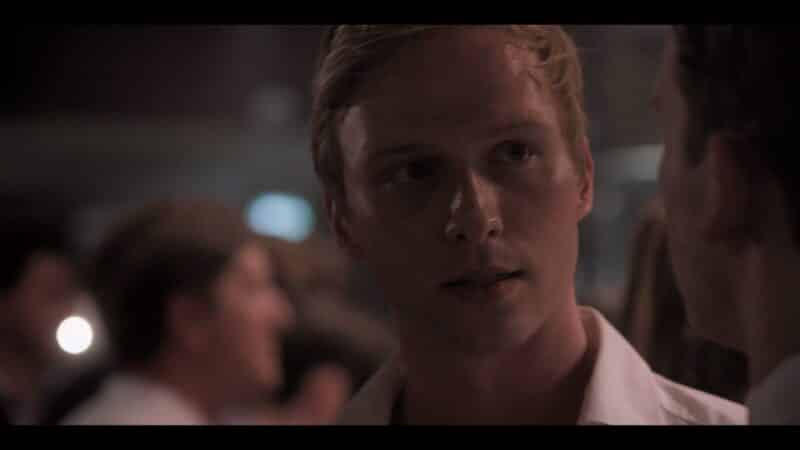 The challenge for us when it comes to Robert and Gus is that Gus is such a square that his sexual love triangle doesn’t raise much of an eyebrow. Alongside that, with Robert, even Theo, pursuing women, yet also wanting to secretly make out and mess around with him, it just makes bi-sexuals look bad. Leaving you to wonder if the usual bankers misbehaving is supposed to be the hook here?

You Knowing Harper's Capabilities & Watching Her Adjust To Each Situation - 88%

As Yasmin and Harper rise to new heights, Gus and his entanglements flail like a fish out of water.