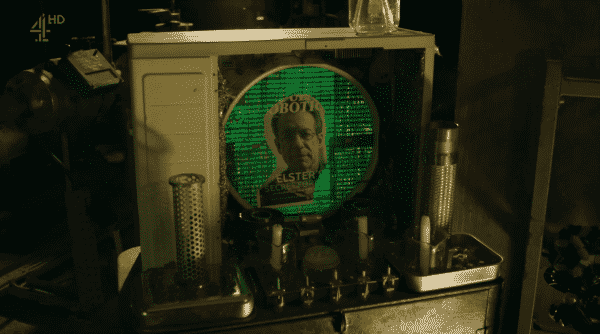 Everyone’s definition of progress is different and one leader does not speak for them all. Which becomes quite clear this episode.

Niska continues her search for the synth who sleeps, dreams even, and just when she thinks she may have found someone who could take her to them – it’s a trap. For, you see, it is the anniversary of Zero Day so a lot of humans are trying to set up and assault synths. This one human in particular, who does know of the synth, thinks Niska knows more and he wants to take them out.

However, Niska is not so easily taken out or down by some simple-minded human. He leaves himself vulnerable and she uses his stun gun to take him out. But, following her getting out, another human claims to know the synth, says the synth knows of her, and wants to take her to him. But, she has to be in the trunk in order to get pass checkpoints, set up by rogues, she has to be turned off. Something which takes a whole lot of faith but she does it.

The reason this topic is titled faith is because, Niska is solely relying on that now and it is quite curious for her to be the one not relying on logic. She is the one who, of the group we’ve been with since season 1, had it the worse. She has no reason to trust or have faith in humanity yet she does so over and over. She is dating a human, trusts humans she doesn’t know, even after being recently assaulted by one, and this is all without certain functions to detect lies or anything like that.

Which, with bringing that up, it does make you question why doesn’t Niska have that? Granted, her systems were compromised and now she is seeing visions. So maybe she had the abilities but now they don’t exist. However, you’d think she would have tried to fix that, or add that feature, since between being physically and sexually assaulted, now dealing with terrorist, she could use every ability her body could handle.

Leading to another question, considering synths are now awake, do you think they are creating body mod communities? That is, communities which try to amplify their abilities or even customize them for the sake of individuality?

As Mattie deals with learning, from Stanley, she is pregnant, she joins Leo on a journey to his childhood home. One in which he tries to find this journal of his father and the main takeaway, after finding it, is that his father thought of him as an abomination after the tests he did. Meanwhile, as he confides this to Mattie, Audrey puts two and two together, after seeing the ridiculous mess Leo made, and figures out who Leo is.

Leading to one hand of the big storyline. With Anatole being the head of the synth terrorist organization he has two things on his agenda. One being that Laura gets killed, maybe others as well, during the Dryden meeting, and the other being Agnes committing a terrorist act. Now, what makes this situation interesting is both hesitate. However, being that no one was there to talk Agnes out of it, she does her duty.

When it comes to Stanley, he actually gets manipulated. Laura, and Mia, are able to convince him to not only not kill Laura but also not kill a member of the Dryden Commission. However, Agnes attack being on new feeds leads to Mia being arrested, as a suspected terrorist, and Basswood talks being back on.

Considering what Mattie has been doing and her noting how she has been trying to keep a low profile, why in the hell did Leo make such a mess? That’s a historical site and just because you lived there you think you could tear through it and nothing would happen? And, taking note my memory is a bit eh, what do people think happened to Leo? All my memories of him have been being on the run so long, I forgot whether he was just leading Mia and the crew, but could still operate under his name, or not.

And let’s not even go into Mattie being pregnant because, well it just is an eye-roll-inducing reveal. So, instead, let’s talk about Anatole. Someone who manipulated these poor and simple synths into becoming terrorist. My question is, should he be considered the leader or simply one of many? Also, considering how David Elster saw his son as an abomination for being half synth, what was his true opinion about fully conscious synth? His journal probably says more than just how he felt about Leo (Personally, I was expecting a version of the consciousness code in there).

Either way, now Basswood is back on the table and that should be quite exciting.

With Stanley failing to handle Laura, who Anatole doesn’t necessarily trust as the voice of his people, he decides to prove his point. Point being, how Laura, despite being their advocate, will always put a human first. How does he prove this? Well, he threatens Sam and a stranger to Laura, some human off the street, and says one has to die – choose. She picks the random human.

Mind you, this is after Sam has a wonderful day with Laura, Joe, and their family. So while Anatole isn’t surprised, Sam is. To the point that, if he could cry and express emotions, I bet he would. Though, since he can’t, Sophie does in his place. Especially since Sam decides to go with Anatole than stay with Laura.

I don’t know about you, but the whole warning that Laura’s friend gave her about learning politics, this would have been the moment to have used that advice. Meaning, she should have picked the stranger to die or even asked if she could have been replaced. But, instead, she picked the human and I think she lost a lot of confidence, from synths, doing that. For while she wasn’t filmed, Anatole is clearly getting a following and that moment seals what he believes. That humans and synths won’t be equal and they will always be seen in by their former roles.

But, one thing missing from this all is that Max knows now what Anatole did and found bombs he was hiding. So considering Max has no idea who has faith in him or Mia anymore, or who belongs to Anatole’s subsect, this should be very interesting.

Oh, and one more thing, I must admit I’m wondering if Anatole has some sort of sync ability. Him touching heads with Stanley reminded me of Conor, from The Cured, who seemed to be able to link up, like a hive, by touching foreheads. For there just seemed to be some weird programming thing going on and taking note of the synth who tried to hack Niska, so comes the question if the rest were hacked.

Was very disappointed with the writing on season 3 episode 6.
What a ridiculous outcome for Laura and so out of character for her, did the writers forget who they were writing for.
1. Laura is a mother, she would protect the young and innocent first.
2. Laura is devoted to her synth causes sometimes at the expense of her human connections.
3. Laura would not have given in so quickly and would have tried to reason with Anatole.
Just felt like this episode was written purely for dramatic purposes alone!

Laura definitely should have chosen the old man to die. That seemed so out of character for her.

I can see that. The show has largely been character driven but now it could be seen as story drive. But, I’d argue the characters they used to drive drama, like Hester, lost their luster quick. By making things more about the story, like Synths as a whole than just this group, it makes things a bit more interesting.

I thought Laura choosing Sam to die was out of character. She’s put her whole family in physical danger for choosing to advocate synth rights. If she had been forced to choose between family and Sam, or if he husband had made the decision, I’d buy it more readily. It just feels like forced drama now and characters submitting to the storyline rather than shaping the story though their character.