House of the Dragon: Season 1/ Episode 6 “The Princess and the Queen” – Recap/ Review (with Spoilers) 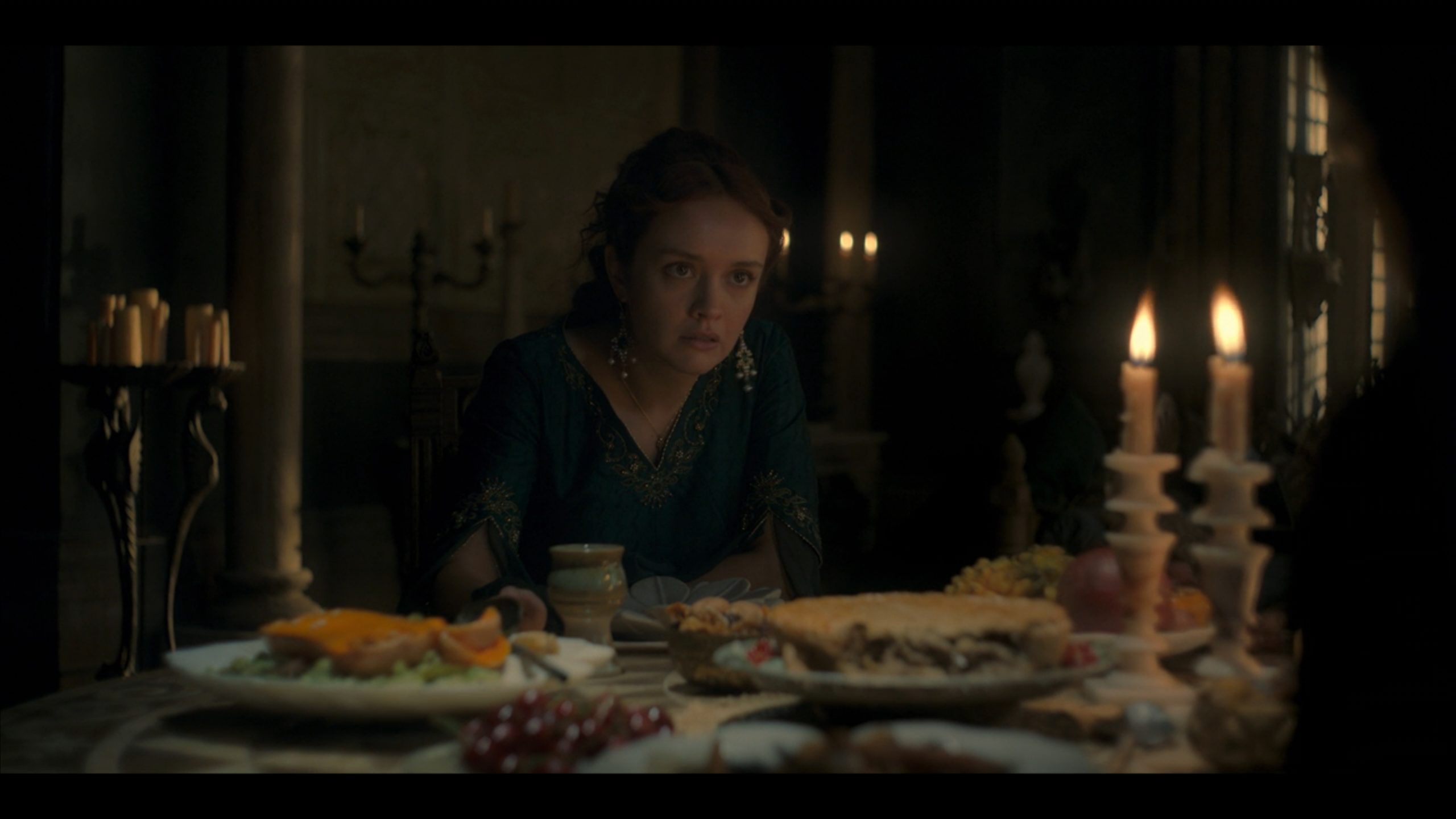 "Queen Alicent with her only ally, Larys," House of the Dragon, "The Princess and the Queen," directed by Miguel Sapochnik, 2022, (HBO)

A nearly ten-year time jump happens, and as Viserys comes to the end of his life, the flames of discontent between his wife, and his heir, reach a fever pitch.

Rhaenyra giving birth now to three bastards who look nothing like Laenor is causing issues. It’s an open secret that Viserys chooses to ignore, but Alicent does not. She complains to her only friend, Larys, as Larys’ brother, Harwin, gazes at his boys with pride. But, when Criston isn’t fair to Harwin’s sons, Jacerys and Lucerys, and rather favors Alicent’s sons, he reveals himself without saying a word. Thus making Lyonel, still Hand to the King, worried about the future of his house, considering his son could be put to death, as well as his grandkids, for what Harwin has done.

Now, as for how Laenor feels? He doesn’t care. He has found a new lover in Qarl, and what Harwin does with his wife is his business. Though even with that said, Rhaenyra wishes Laenor cared more about his position.

Rhaenyra tries to make nice with Alicent by offering her son Jacerys to Alicent’s only daughter Helaena, it is no dice for her. Viserys would love for the two ladies to squash their beef, but Alicent, who sees herself as holding the high ground, refuses. What doesn’t help though, is the belief that Rhaenyra’s bastards are a bad influence on her sons, Aegon and Aemon, with Alicent especially worried about Aemond since he has yet to receive a dragon and is being bullied.

And speaking of their mother’s fate, after Harwin interfered in Criston’s training and even put his hands on Aegon, he and Lyonel take their leave. Harwin to go to the family home, and Lyonel to escort him. This allows Larys, in an effort to prove his loyalty to Alicent, to set up his brother and father and have them killed. Thus lessening Rhaenyra’s allies and ridding the Red Keep of one scandal.

However, while Harwin and his dad are gone, Daemon is on his way back as his wife, Laena, decided to commit suicide rather than go through a C-Section for her third child. Thus leaving Daemon with two daughters, Baela and Rhaena, who he has little interest in, as they are not boys and, without a proper castle to be lord over, they don’t make for the greatest assets either.

Better To Run From The Sword Than Towards It – Rhaenyra, Laenor, Qarl, Harwin, Alicent, Larys, Lyonel

With there being no sign Alicent has any desire to make peace with Rhaenyra, after her father poisoned the well and Rhaenyra has lied multiple times to her face, Rhaenyra decides to take her family to Dragonstone. This includes Laenor, and his lover Qarl, even though she knows without sitting at the council table, she will now be out of the loop and no longer have her father’s ear. But, even before knowing of Harwin and Lyonel’s death, she knows it isn’t safe and that she may have to prep for war. One which Larys is foaming at the mouth for.

The Aging Up Transition Was Surprisingly Smooth

Unjustly, there were fears that Emma D’Arcy wouldn’t be able to match what Milly Alcock gave us as Rhaenyra, and I can say at this point that while the characters share a name, the approach is different. Not better, not worse, just different, and the same can be said for Olivia Cooke’s version of Alicent. These two deliver characters who are no longer young, naïve, or optimistic. Both are realists, desperate in some ways, yet always trying to play their hand and bluff their way through uncomfortable situations.

With that in mind, there is an inability to compare apples for apples. However, there is undoubtedly a before and after time jump cut in the season.

Larys As A Villain

On social media, it seems many see Alicent as the new Cersei, but Larys is the villain we need to be worried about. Alicent doesn’t seem to want to get her hands dirty, and isn’t necessarily plotting or planning much. She remains a woman manipulated by her father and looks down on her former best friend for being a liar. Never mind a liar whose lie is so blatant that everyone turning a blind eye is immensely frustrating.

Which is where Larys comes in. Between being the unofficial master of whispers and being far more strategic than Alicent is currently, he can do what she cannot or will not – and acts independently. This makes him dangerous, especially as he cares about Alicent’s favor, because Alicent likes to vent but may not ever give him a command. Thus making Larys an eager beaver who isn’t above extremes if he can justify it by saying it was the Queen’s unspoken demand.

Daemon is in limbo right now. You know, down the line, he is going to play a major role when Viserys dies, but until then, he just exists and has enough of a storyline to remind you he matters. Case in point, Laena and him are seen as a couple with children, and clearly, he is having sex with her, unlike his last wife. But why has he abandoned the Stepstones, doesn’t care for his daughters, or what his next move is? All we know is that he doesn’t want the responsibility. That is the sum of why he isn’t as active as you’d expect, and his ambitions have seemingly died with time.

So the death of Laena, who we barely knew as a teen or child, lacked impact, and even in terms of her daughters, there is a need to question why we should care about their fate? Which makes Daemon’s whole plot in this episode terrible to the point of questioning how long his arc will be in a slump?

House of the Dragon: Season 1/ Episode 6 “The Princess and the Queen” – Recap/ Review (with Spoilers)
Overall
While Daemon falters, after the time jump, both Olivia Cooke and Emma D’Arcy pick up the baton from their younger counterparts and dash forward without a single misstep.
Highlights
The Aging Up Transition Was Surprisingly Smooth
Larys As A Villain
Disputable
Daemon’s Storyline With Laena
80
Subscribe to our mailing list Follow Wherever I Look on Twitter and Instagram, Like us on Facebook, and Subscribe to the YouTube Channel.