Things hit a breaking point for many characters as the strain of the events we’ve seen have become too much to bear.

With Leila apologizing to this person and that person and not responding how she wants, she is frustrated. Add on Meera thinking Leila isn’t ready to be the lead, and thus her getting dropped? Oh, she is in a tailspin. One that even Rabbi Schultz can’t help with, for on top of the inability to have people accept her apology, her identity is once more a problem.

Why? Well, because a teacher gives her a check minus for not connecting to the material and her at a loss since talking about Jews in China is the closest she can get to speaking about herself. After all, she was raised by two non-practicing Jews, and she is originally from China. Yet, it’s never enough. Leila, no matter how she tries, is never enough. Sid being forced out remains a huge issue. His parents refuse to accept it, and Flora? Oh, her focus is how much of their relationship was a lie, did she cheat on him, and those are hard questions to answer for Sid. Mainly due to him wanting to be all that would come with dating her from a sense of normalcy, love from his parents, and not dealing with other people’s comments. Yet, that no longer seems possible now.

So Sid just deals with it by letting Flora speak her peace and her breaking up with him, alongside forcing his parents to see him and deal with the fact he is gay. An idea both still reject.

Both Joey and Dom have hit a point where they are willing to sacrifice all they have known because they are ready to bottom out. For Joey, she is changing schools, living with her dad, despite her issues with him cheating on her mom, and is trying to deal with the DA saying her case isn’t strong enough to go to trial. With Dom, the expense of trying to do people’s hair for money, alongside keep up her school work has just come to the point where it isn’t sustainable.

But what tips them both over is someone trying to support them. In Joey’s case, her little sister Nina brings up how people are talking to her at school, saying she likes it rough like Joey. Add in her upset the boys have had nothing change while Joey uproots her life, and thus she tries to make Joey change her mind about leaving Grand Army for a catholic school.

Then with Dom? Oh, s*** hits the fan. She gets caught cheating on a test she wasn’t prepped for, so she negotiates an F over expulsion. Also, John tries to hand her $300, and she takes offense to that. Add in feeling a certain type of way because her friends think marrying a dude for $10,000 is a bad idea, and you can see her willing and able to cut off ties from everyone. For at this point, it isn’t just the pursuit of money that is getting hard to maintain, but all the relationship dynamics, even the good ones. Hence her telling her mom she is ready to marry the boy.

Perfect Way To Setup A Finale

With this episode’s events, either we will see people have a breakdown like Joey had or a breakthrough. There is no other option as Leila has pretty much lost everything. She has no friends, feels distant from her parents, and her desires to become an actor? They are currently dashed? Though, to really throw some feces on her dream, she got the lead role by luck and lost it due to lack of talent and preparation! 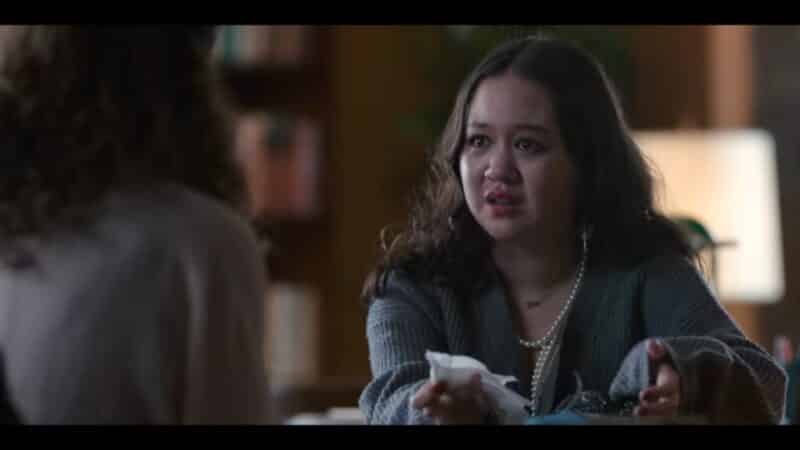 Then with Sid, on top of getting passed on by Harvard, all he really has left is Meera. Flora clearly wants nothing more to deal with him since she feels used and suspects she was cheated on. His parents haven’t disowned him, but clearly want to avoid accepting his sexuality, and the swim team? Well, between Bo being there and the fear people will think he is checking them out, the likelihood of him going back there feels rather slim. Though with him asserting himself with his parents, you never know?

Taking it to Jay, clearly, we don’t care about him, so SKIP! So, instead, let’s talk Joey. You have to appreciate Nina reminding Joey of who she was. I can’t say is, since trauma changes a person, especially trauma like Joey’s, that made her lose her support team. After that teacher thoroughly embarrassed her; lest we forget, Tim, George, and Luke helped her recover. But now, they are the ones she is trying to heal from, and in losing them, she lost nearly everyone. Making it so, outside of her family, who does she have left?

That is a hard wake up call to deal with, people slut-shaming you, calling you a liar, and all because they think you were too flirtatious and promiscuous. Alongside the idea that, because you initiated something, it means that is enough consent for anything and everything to go down. But, one issue that’s a part of this is Tim staying quiet. Both at the moment and after the moment passed.

Leaving Dom. It’s hard to not believe that, with how things are in her household, she lashed out at John and her friends because she can. Not to imply they are expendable, but at the same time, she can survive without them, and, as she said during her Sisters Thrive interview, she is their demo. Dominique is the one who needs support, and similar to how Rabbi Schultz notes, there is a difference between a therapist and a spiritual advisor, there is a difference between friends and a therapist as well.

Which is the heart in understanding what Dominique is going through. John trying to throw money at her problem, her friends not understanding the corner she is backed into, it is because they are too close to the issue. Thus they try to grab the wheel and make Dom feel even more out of control when really, she just needs directions. Dom doesn’t need a backseat driver or someone in the passenger side trying to take over. This little bit of control, the feeling she still can make decisions, is the sole thing keeping her sane.

The last thing she needs is people questioning that directly, and not recognizing their opinions will only cloud her judgement and cause doubt that doesn’t help whatsoever.

As the s*** hits the fan and some decide to fight their way to turning off said fan, others are drowning and unsure if to press on, just wallow, or the other few options they have.