As GLOW seems less like a dream and more of a reality, Debbie finds herself needing to get serious if she is going to the star of this thing.

Justine likes the pizza guy. However, Justine is too shy to call the pizza guy who gives her his number. So, Arthie, who is just trying to study, decides to hook her up.

Well, that was disappointing. Justine has been someone you kind of wanted to get to know more because there is something fishy about her. Never mind it was implied early on she was a minor, but her interest in Sam seemed like a red flag. A “I found out you were my dad so I researched you” kind of red flag. Yet, like the majority of the women on here, we see her in the background, she may get one or two scenes to talk, but that’s about it.

Same thing goes for Arthie. She, like damn near every woman of color, outside of Cherry, on this show, is barely featured. Though with Arthie it really sucks because how many South Asian actresses can you name? Much less, actresses who aren’t just in Bollywood programming but mainstream American programming. Something which has a marketing budget behind it? I could say the same thing when it comes to Jenny (Ellen Wong) who also has just been there, smiled, looked cute, and the camera moves on.

The Russians Save The Day: Ruth, Sam, Sebastian, Rhonda Though Sebastian is producing, Howard Foods is not a sponsor. Something which is a problem for the network exec is looking for someone to support the show. Such as Patio Town. A company which initially isn’t interested in GLOW, but Ruth saves the day. By taking on this evil Russian character, she sells to the rather uninspired people what Patio Town is selling. Thus sealing her worth to Sam and Sebastian, and perhaps crafting Ruth a real character.

But, as all this happens, Rhonda gets jealous. After all, she is the hot one. She is the one screwing Sam. Why isn’t she getting praise? 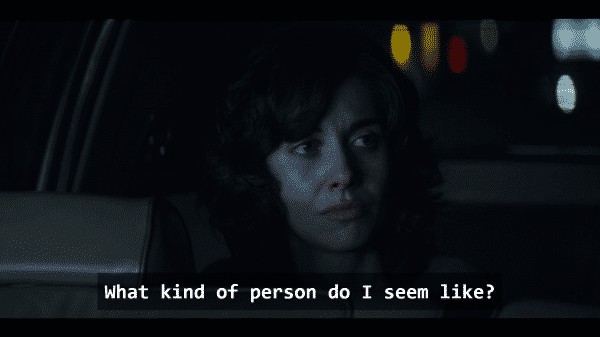 Let’s not even talk about Rhonda. For really, she is part of the problem of this show. Which, to me, is that it has this hook of saying “Look at all the female characters!” like they will actually make that mean something. However, unlike Orange is the New Black, among other shows, the amount of women on here is a gimmick. For we are half way in and outside of Gilpin, Brie, and arguably Noel, can you say they have consistently done much for any of these women? Yeah, we got something out of Carmen, Sheila, and Tammé to a point, but nothing significant. They are only given enough time and lines to make this worth their while and to justify Netflix signing their paychecks.

So, focusing on what matters, Ruth has a character now! One which is a little cringey, to the point I had to mute the scene to get to it, but its camp. I mean, Brie often is performing in a camp style on this show. Which is probably why I’m not fond of her character but I can tolerate her. Though I don’t know if the same can be said for Sam. Once again the show tries to make him seem less of an ass and more like a very insecure little man and I just rolled my eyes. 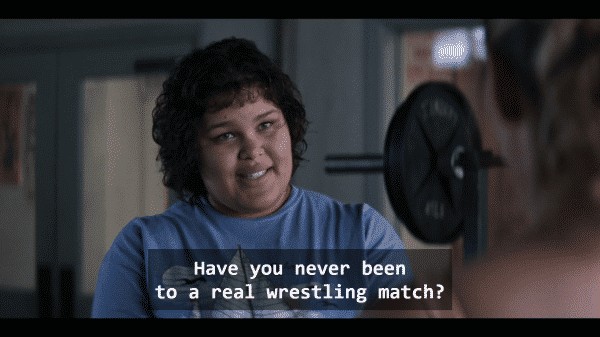 When the network exec comes to visit, Debbie makes a fool out of herself. Reason being, she doesn’t take wrestling seriously. As seen, she isn’t like Ruth and relying on Cherry or Carmen to help her understand the roles. Debbie pretty much sits on the side to be seen and eventually used. Something Carmen even calls her out on. Which leads to her, Debbie, and Melrose going to a real wrestling show.

There Debbie finally gets it. The whole thing is a soap opera. With that, and some Steel Horse, alongside Cherry forcing her to do a 5K for missing curfew, she is ready. She wants to take this seriously and knows to be at her best, she needs a heel. A job she hands over to Sam. 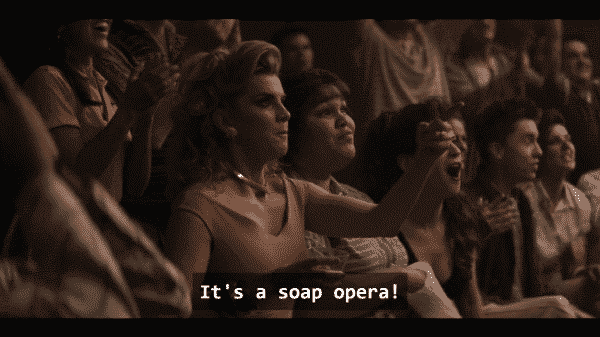 Like with Ruth, I’m learning how to tolerate Debbie. For while I’m sure some may take note of the guilt she has for being a working mom, her dealing with a divorce, or praise her for getting on that horse, Gilpin doesn’t make me care about that. She could be very well acting her ass off but there is this disconnect that is so hard to explain.

Something I don’t want to say is a race thing, but I almost think it is. Like the idea of pitying the white woman who is having such a hard time seems ingrained into this show. But I need more than that. For while Debbie and Ruth aren’t as annoying as Piper and Alex in the often compared Orange is the New Black, there still feels like there is an assumption I should naturally root for them. Yet, I’m given the absolute bare minimum reason to do so.

That aside, with Debbie looking for a heel means her and Ruth working together. Which is solely exciting for that may mean more time for the other characters J YAY!