A new potential series regular is added, but unlike Ruby, they may not be of service to Elena and the Island.

For Mateo’s bachelor party, they somehow found themselves booking a trip with their best friends to Fantasy Island. There, Mateo explores the fantasy of the one he saw as the one who got away, only to learn she was married when they had their memorable tryst. Eli? He dreamed of becoming a ladies’ man but realized superficial attention doesn’t make up for the genuine connection he truly wants and deserves. Lastly, Shawn, the man whose fantasy was to live without fear, faces his true fear, which isn’t the ocean, getting a tattoo, or anything like that, but confessing his romantic feelings for Eli.

Now, let it be clear, Shawn has been out since college, but the reveal of these feelings toward his best friend are new, and while the romantic feelings aren’t reciprocated, the love is.

Are You My Daddy? – Helene, Mateo, Shawn, Eli

While the men live out their various fantasies, a young Gen-Z woman named Helene finds herself weaving in and out of each one in hopes that one of the three men might be her father. You see, Helene grew up with her mom and had a close attachment, but she died about a year ago. Because of that, she has felt untethered, and this has driven her to want to meet the father she never knew.

Now, let it be noted, it isn’t because her father didn’t want her, but more so likely didn’t know about her. So, under Elena’s guidance, she questions Eli, Shawn, and Mateo, with each one making it clear it wasn’t them. Shawn only slept with one woman, far too into the past and not under the Belize hurricane conditions Helene was conceived. Eli was never in Belize and Mateo? While he has traveled to the country, it was a few years ago, not far enough into the past to be Helene’s daughter.

Thus leaving Helene frustrated, especially since the conversations may have given the men some insight into their fantasies, Shawn especially, but Helene got nowhere in pursuit of her own.

The End Of One Chapter & Start Of A New One – Helene, Javier, Blue, Elena, Ruby, Isla

Ruby is really licking her wounds over Gina. But, with love in the air, she tries to be happy by getting into the spirit. She even plans the bachelor party for Mateo to get herself distracted. But, Elena pushes the idea she needs to really face what she is going through and deal with it. This leads Ruby to do a cleanse, which includes burning all the things from her relationship with Gina, which seems a bit dramatic, but in freeing herself from Gina, Isla, the woman who gave her the tattoo on her back, pops up.

This is notable since Ruby, who spent part of the day with Shawn, bonding over being queer and life, wanted to take him to see Isla, but when they went to the tattoo shop on the beach, the attendant said they had never heard of her. Yet, here she is, in the flesh, making it seem she is a mermaid who comes on the beach sometimes for fun but lives in the water and now only checks out Fantasy Island at night – which she invites Ruby to do when she has the chance.

Switching to Elena, things couldn’t get any better between her and Javier. There are no secrets or reasons for anxiety, just the giddy honeymoon stage that Elena is finally open to after letting go of what James could have been, what he was, and the expectations and standards he created. But nothing lasts forever, and as much as the Island is working on Ruby and trying to get her to grow, learn and change, it seems to want the same for Elena and Javier.

How so? Well, it is revealed Helene is Javier’s child, and many years ago, while in Belize, during Hurricane Helene, he slept with Helene’s mother, Blue, and conceived her. As you can imagine, this is a shock to everyone, and while Javier embraces it, you can see Elena might be torn between duty and maybe wanting to keep Javier to herself. But, rather than steal a child’s fantasy, she invites Helene to stay and get to know her dad, for which Javier is grateful.

What Helene Could Bring To The Show

Beyond leading you to question what guests may stay and which may leave in the same episode they are introduced, you cannot deny Helene brings a lot to the episode and show. For one, she seems to have some connection to the island, as noted by Elena, who isn’t used to guests being able to enter other people’s fantasies already in progress.

On top of that, her insight seems to have the same potential to offer guidance as Elena and Ruby have been instilled with. Combine that with Javier being her father, and it could make it so Helene is more than a Gen-Z representative causing minor drama with ageism comments. She could help further push how Fantasy Island is a family and maybe get everyone to talk about the families they left behind.

The Mystery of Isla

There is a need to question everyone’s existence when it comes to Fantasy Island, beyond the series regulars. Are they there when the Island needs to conjure them up only? Such as Isla? Heck, considering Isla gave Ruby the tattoo that transformed her and made her get a second chance at life, should Isla be considered an extension of the Island, if not the Island itself?

Often, the Island is spoken about as this ethereal force that Elena is in communication with in some form, but what if it also walks among everyone? What if it has some special interest in Ruby to the point of wanting to experience the kind of fantasies it grants others? Magic has to come from somewhere and be replenished somehow, so may we learn it is through feeding off other fantasies the Island maintains its magic, and now it wants a more direct taste of what kept it alive, or are we way off?

I mean, Isla could simply be a mermaid, siren, or just a woman who likes to swim nude in the nighttime?

In the movie “Close,” which came out in the last few months, we got to see two boys whose friendship has a beautiful intimacy, but that film didn’t give what Eli and Shawn’s friendship does. They are grown men, who love each other very much, but there aren’t reciprocal romantic feelings. Yet, despite this, they don’t push each other away but instead bring each other closer to honor their friendship and all there is beyond feelings of romance and potential lust.

It truly is a beautiful thing to see, and it furthers the need to tip a hat to “Fantasy Island” for wanting to bring queer stories to network television without making being gay, lesbian, or what have you, the totality of someone’s character description. Since, whether talking about Ruby or Shawn, yes, they are LGBTQIA+, but so much more. 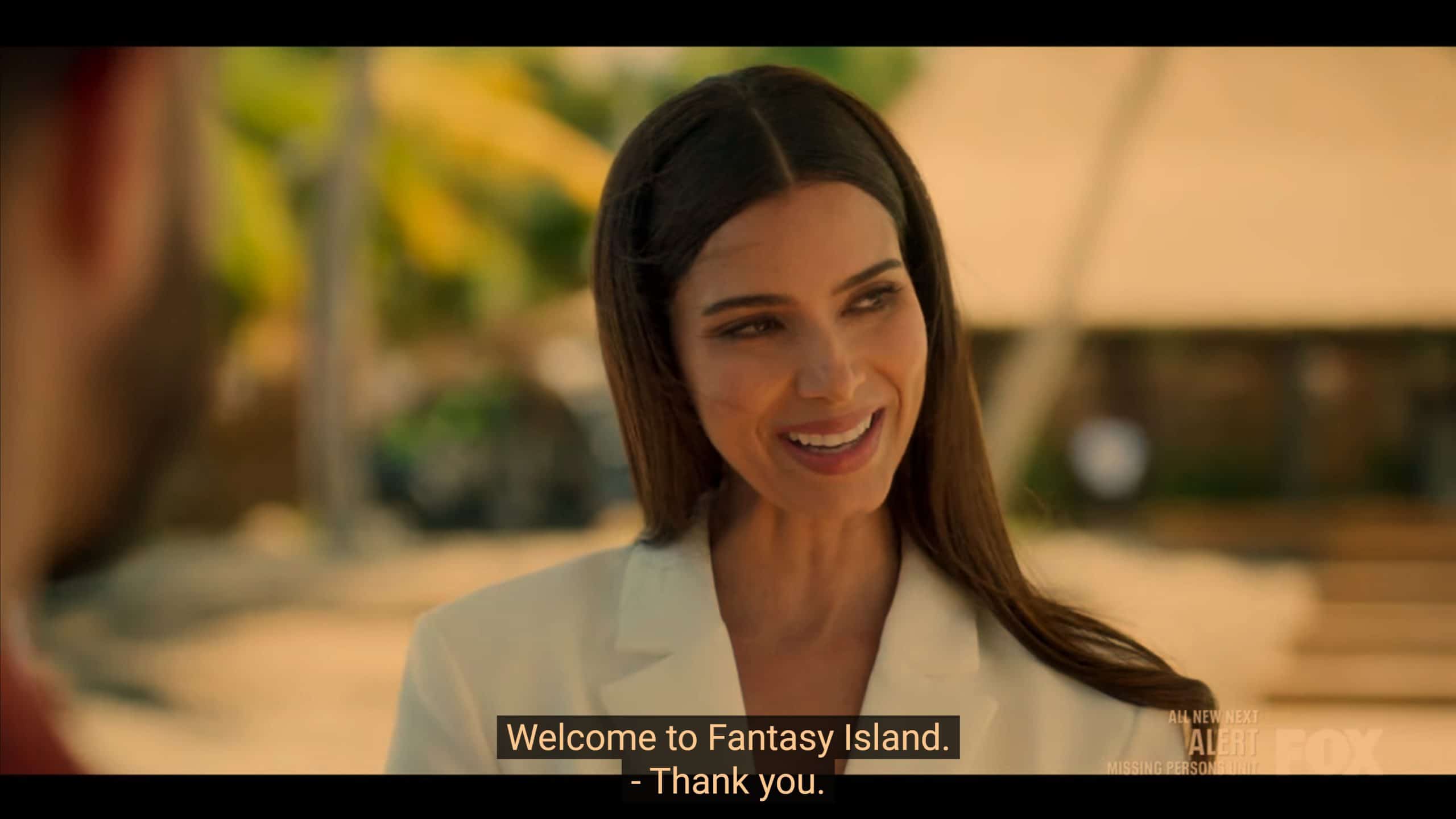 Fantasy Island: Season 2/ Episode 2 “Hurricane Helene; The Bachelor Party” – Recap/ Review (with Spoilers)
Overall
With a new character joining the show, possibly temporarily, maybe permanently, “Fantasy Island” has found a way to perhaps shake things up a bit in the long term while maintaining quality episodic content.
Highlights
Eli and Shawn
The Mystery of Isla
What Helene Could Bring To The Show
Disputable
81
Subscribe to our mailing list