Has new money, aka a budget, changed The Bodega Boys? Are they worth paying that Showtime fee to see? Let’s talk about it.

After leaving Vice, because they didn’t want to kick out the cash, Desus & Mero have returned, and it is on Showtime! However, more money usually means more problems right? Well, we may have found an exception. For those familiar with the style of the boys, it’s clear that with a bigger budget comes better things. Better video editors and graphics, a stage for interviews and stage for when it is just them, and a field trip to DC.

Needless to say, while they may not being paid at the level the most notorious show in late night deserves, they definitely are treated as they are valuable now.

While Vice wasn’t a shoestring budget, it was clear they gave Desus & Mero just enough to look presentable. With Showtime, you can tell they gave them a budget. They have two sets now, a special bodega looking entrance for guest, the way graphics show and transition makes it seem someone is doing what they love and not just gaining experience, and so much more. Also, though it isn’t a huge thing, the title cards look hot.

The Best Interviewers In Late Night

While AOC is hip and from the Bronx, so fully capable of code-switching, it is nice to get late night hosts who get it. You know, who aren’t stuffy, trying to keep it PG at any costs, and making everything feel very sanitized. With Desus and Mero, it isn’t a hot mess, but it is definitely more casual than what we often get. I’d say, it is similar to Graham Norton in a way. Just with less side-eye from the host and the Bodega Boys not being comedians.

Take how their guest this week, AOC, was handled. Being that she is a Bronx native, and isn’t what could be seen as a foreign space, she got comfortable. Something you don’t see a lot of interviewees do unless for comic effect. Then, to really show how good these guys can be, when they were in her element, in DC, nothing changed and even when Rep Ilhan and Rashida joined, things were kept intentional but casual. Like, both were on message, but also of the vibe that they were just hanging out and shooting the s***.

Which shows, heavily, in that Green Book sketch. I hope this was just a test and since they finished it, they aired it. For while I get they wanna spread their wings, show they can act so they can get bigger deals, that sketch was a terrible audition. That’s even with all the writers on this show and the Bodega Boys usually being quite comical. However, perhaps like Eddie Murphy in recent years, when forced to be something they aren’t, the Bodega Boys don’t come off funny like they usually do but end up seeming like everyone else. 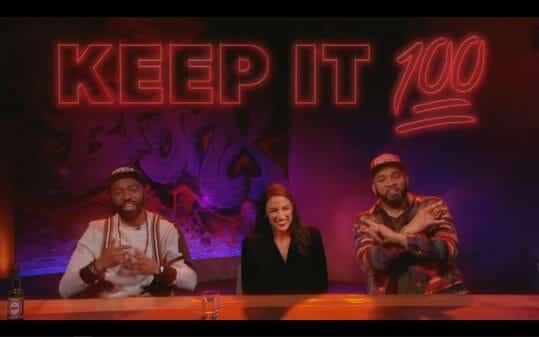 Click on the image and get a free trial to watch future episodes!

Despite that sketch which was, unfortunate, Desus & Mero really make a case to get Showtime. Granted, it would be nice if clips of interviews and a little more were free, but for the brand to remain strong, it needs money and viewership. Which is what Showtime is expecting so even if just while new episodes are being released, as I’m sure many of handle subscribing to anything, definitely check out the Bodega Boys.

The Best Interviewers In Late Night - 85%

Despite that sketch which was, unfortunate, Desus & Mero really make a case to get Showtime. Granted, it would be nice if clips of interviews and a little more were free, but for the brand to remain strong, it needs money and viewership. Which is what Showtime is expecting so even if just while new episodes are being released, as I’m sure many of handle subscribing to anything, definitely check out the Bodega Boys.