They say when drunk you speak the truth, but when high on acid, does that mean you instead see and hear the truth?

Rather than Billy and Marcus go alone to kill Billy’s dad, it becomes a group vacation. One which includes Saya and Maria, because they come together, and Willie joins due to? Well, I would say because he has a car, but Saya drives for most of the trip, so that’s not it. Let’s just assume he is lonely and his gang doesn’t ever want to go anywhere – especially Vegas.

But, when hanging with Saya and Maria, you know there has to be some debauchery. Those girls don’t believe in having a fun time without some liquor, drugs, and/ or sex – but more on that later. The original plan was just to get something light, some weed or acid of quality, but Marcus wants to do his own thing. So, he gets bad acid one time, and then follows that up by showing off and taking a handful of tabs. Thus setting the rest of the episode off into a mind blender which features animation and a multitude of scenarios you question the legitimacy of.

Situation #1 you question the legitimacy of: Did Marcus and Billy really kill Billy’s dad? It had to be done, for Billy’s dad was still racking up debt, and Billy didn’t want his brother dragged into King’s Dominion. However, considering how badly Marcus was tripping, can we believe he helped Billy kill someone? Much less, after heading to the casino, him winning a jackpot and a member of security pulling him in? Never mind Master Lin showing up to bail him out of the situation? Oh, and Chester popping up too? 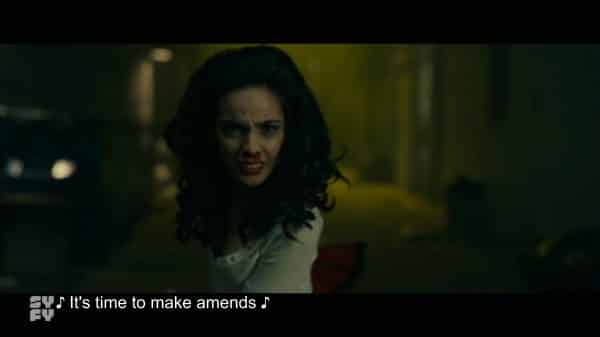 Though, considering acid makes you hallucinate, maybe everything we see and hear is what Billy fears and imagines? Take Maria trying to have sex with him and Chico catching them in the act? How about Maria and Chico revealing Maria is technically a rat but because the cartel used Maria to kill and set people up, she got elevated? Let’s not forget Willie being exposed as a pacifist and Maria, with her signature fan, slitting Chico’s throat?

Was all that real? By the time the episode ends, and Maria is for some reason kissing Marcus, it seems like it all was. But even that action, Maria kissing Marcus while Saya is wide awake and sober in the front, it makes you wonder if this is all a dream. Yet, all signs point to this being the truth and the consequences soon to come.

It Was Wonderfully Twisted

Only Atlanta has left me this confused about what happened, yet still maintained my loyalty. For most of the episode, thanks to all those tabs Marcus took, you’d think was all part of a dream. Heck, maybe a homage to Fear and Loathing in Las Vegas since we see a guy who looks like Hunter S. Thompson, including his signature cigarette holder. But, what really throws you off is that we get our weekly dose of animation and the styles shift so often that you feel like you need to just enjoy the ride and stop wondering what is real or not.

However, then people start to die, Master Lin pops up, Chester, Chico, and Maria is suddenly making moves on Marcus who isn’t pushing her away. Thus leaving you very confused, but appreciative that this show has clearly no intention of keeping down a steady path. Life is a winding road of random moments and situations, and Deadly Class plans to follow suit. The only difference being we’re dealing with assassins in training rather than what you might be used to.

Each episode, thus far, has featured a animated sequence. Usually it has been used to feature a character’s backstory but in this episode it was utilized to show how messed up Marcus was. Which led to beautiful scenes that had multiple art styles and really enhanced the feeling that it may not have just been Marcus who was tripping. Even if under the influence, it seemed a bit weird for Maria to come onto Marcus. Granted, Saya downplayed whatever she had with Marcus when we last saw them speak about him. However, let’s not take Marcus’ part out of this. In the hotel room, and in the car, he could have curved Maria, but he didn’t. Also, considering Saya was in the front seat, and what went on between those two in the last episode, Marcus should be damned just as much as Maria.

But, it isn’t like Saya wasn’t warned. Maria being selfish, doing what she needs to in order to survive, it might be what she does. Though she appears to be the victim when it comes to her relationship with Chico, especially considering how it started, who is to say she didn’t choose Chico and thought this life would be easier than it turned out to be? Then with Marcus? While a virgin, maybe someone who girls of Maria and Saya’s ilk have never taken note of, that isn’t an excuse. After all, isn’t he the one always criticizing society and trying to show he is self-aware? What happened then huh? Are we going to blame the acid trip?