Marcus steps up to be there for Saya and Billy, and these alliances will come of great use as Chester gets closer and closer to King’s Dominion.

After the legacy dance fiasco, Master Lin decides to put the main perpetrators into a room together over the weekend to hash things out. Mind you, their weapons are taken and while the room has books, among other things, if they wanted to kill one another they’d have to use a chair, break a table, or use their bare hands. Something that, surprisingly, none of them do. In fact, they open up a bit to each other.

For example, Chico reveals to Marcus that his little brother died. Also, while talking about the world turning into Mad Max, Chico reveals he knows what is going on with the environment. But, as conversations happen, and it seems the walls between each person break down, then Saya’s cousin and another associate break in and try to take her. In the process, they kill one student and injure Petra and Viktor.

With all that madness, Chico is ready to give up Saya to save his skin but with Marcus vehemently against it, he just finds a way out the room, and when they discover he has left, so goes Marcus and Saya. This leaves Petra and Viktor alone, and while Viktor hurt her, she decides to, as they both bleed out, to talk about her family and her childhood trauma. 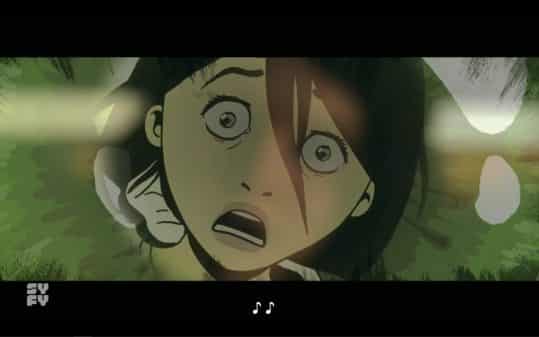 She begins by talking how normal her family once were until her dad decided he would push the idea he is a messiah and pushed her mom to the point of death. Then, to freak her out, he kept her mother’s eyes in a mason jar in the fridge that was discovered as Petra was starving. But, despite all that is said, her scar origin isn’t revealed. That is, whether her dad did it or it was an accident. But, with them both living, we could get the answer to that soon.

There In Your Time Of Need: Master Lin, Saya, Marcus, Maria, Willie, Chico

Being that Saya lost her dad, and isn’t really close to any of her family, naturally, she is a bit of a loner. Yeah, she is close to Maria, but their relationship is more so about having fun. Hence why Maria is a little bit cagey when it comes to the things which don’t fit into the façade she puts out there. But, when it comes to Marcus, there is something different.

Maybe it is because, no matter how she tries to push him away, even by revealing the pledge connection, he doesn’t go anywhere. Hell, it doesn’t even faze him. He still stays by her side, even when it could mean death, and shows up even after it is clear he is no match for them. All of which doesn’t bring lonely, lovesick puppy vibes – at least to her. He proves himself as someone to depend on, that is honest, and makes it hard to not fall for.

But, as shown with Maria, love is sometimes dangerous and unwanted. Hence why she too decides to talk to someone out of her circle and asks Willie to get her a passport. Something he does, after a little hesitation, but also, Chico gets out of detention before she can pack a bag and escape.

On top of being there for Saya, Marcus is also there for Billy who went home to check on his brother and ended up running into his dad who, fun fact, is the reason he is in King’s Dominion. You see, Billy’s dad owes the mob and seemingly sold his son into their servitude and thus Billy is training to be an assassin for them. Which, considering all Billy is learning, I’m sure his father’s debt, plus the debt of school tuition means Billy won’t be free anytime soon.

Yet, there is the opportunity to get free from his dad by killing him. Something that Marcus is requested to join and considering Chester, and his equally weird brother Sandy are getting closer to Marcus’ location, this is good timing.

What You Get When You’re Friends With Marcus

It’s hard to not adore Marcus. While he has many anti-hero elements, since he is anti-establishment, a bit pessimistic, and is open to murdering people, it’s easy to forget that when he is so loyal and true to Billy or Saya. I mean, just with Billy, who he has no romantic ties to, he gives him the same time and attention he gave Saya. He listens, doesn’t interrupt, and gives Billy the ability to set aside playing off how bad things are and lets him be vulnerable. 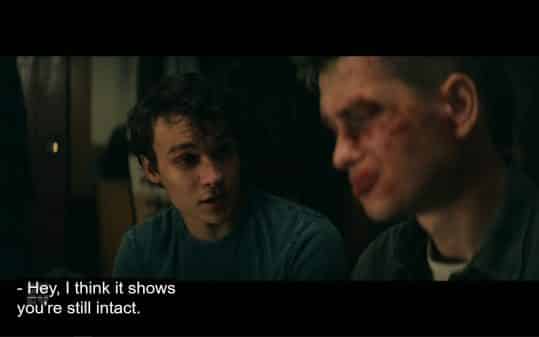 Then with Saya, while you have to recognize Marcus’ emotions are involved, and he really has nothing to lose but these new relationships, you have to love what he means to her. As said, he is the only person who doesn’t lie, means what he says, and doesn’t put on a show. He came out about not burning down the home, not too long after meeting Saya and him realizing this is what people thought. Repeatedly, he has gotten close to her and didn’t take advantage of the situation. Also, unlike Maria, he proved himself to be there for when things are fun and exciting as much as when the s*** is hitting the fan.

Add in she doesn’t have anyone and he doesn’t, and it makes the desire to depend on each other strong. Especially since who but Marcus may understand losing everything?

Honestly, with each backstory, I’m pushed to question why this wasn’t just animated from the get-go? SyFy released an actual webcomic, linked in the 1st episode recap, that pushes the idea that could have been the way to go. But, setting aside how cool the animation was, I thought Petra’s back story was okay. Hers wouldn’t necessarily have been the next one I would have liked to have seen, even though she was a focal point in the last episode, but it is only because she plays a minor role in the larger scheme of things.

Even with Chico revealing his brother’s death, and showing he can do more than seem hard and be abusive towards Maria, his shtick is getting old. In fact, he and Maria need a major boost at this point. For while Maria gets to piggyback off Saya sometimes, it doesn’t feel like enough. We need to see her do more in class, go on a mission or something! Heck, weren’t they all tasked to kill one person? Let’s spend time with Maria and see her do so.