With a legacy dance on the horizon, hazing hits King’s Dominion hard. However, it isn’t as difficult as the decision Master Lin is forced to make.

Images and text in this post may contain affiliate links which, if a purchase is made, we will receive a commission. Most affiliate links include an upward facing, superscript, arrow.

Trigger Warning: in case you haven’t seen the episode already, there is a bit of vomiting during 13:26 to 13:45.

While closer than expected, Chico decides to throw a monkey wrench into the sisterhood Saya thinks she has with Maria. Maybe it is out of jealousy, perhaps the truth, but with Chico noting that Maria is just a spy, it does plant a seed. One which may or may not negate Maria opening up about her dreams, them stealing alcohol together, and having a touching conversation in which Saya reassures Maria that she isn’t crazy. But, considering someone possibly of Saya’s crew has received money for a hit on her, who knows is Saya may believe Chico is a possessive douche who doesn’t, on occasion, tell the truth.

All things considered, anyone else wonder why we haven’t met any of Saya’s crew? We see her hang with them sometimes, but unlike Maria, Willie, and the others, it doesn’t seem like she spends quality time with any of them. Is it because of her family’s rank or is she, as seen, more prone to spend time with outsiders than her own? Which, who knows, might be the issue at hand?

Yet, considering Master Lin paired her with Marcus, rather than with someone of a similar legacy background, could he be contributing to this? Heck, does Saya’s parents, assuming they are alive, even care?

There are many long-held traditions at King’s Dominion – one of which includes hazing the rats. This has long been a problem for Mr. Denke, and after talking with Marcus, it gets the ball rolling in thinking about him leaving. Also, it pushes him to tell Marcus to learn what he needs and never mind the final. A test which isn’t thus far detailed, but could be deadly.

But, focusing on the present, the issue at hand is that, for the rats, things are getting past the usual teasing the legacy kids do. It begins with putting rat meat and tails into their food but gets much worse. This is especially true for Petra. Someone who, after being wooed by Viktor, is falling for him a little bit. For while he has been bragging about sleeping with her, not being for classism, and defending his choice in women, then he throws her to a wolf – Brandy. It happens specifically at a dance for the legacy kids and leads to, not a Carrie moment but Petra being forced to dress like a basic girl going to a dance. Leaving her embarrassed and even Marcus, who was trying to keep his head down, wanting revenge.

How? Well, Mr. Denke’s latest lesson was about Mellow Yellow poison which causes hallucinations. Combine that with learning how to use blow darts, and the rats decide to get revenge on those who took advantage of Petra. However, before Chico gets hit by a blow dart, he stops Marcus, and they nearly get into an altercation. But, after keeping their friendship private for the longest, Willie decides to step in and keep Marcus from getting his ass beat. Making it so, like Saya, it seems Willie is venturing outside his group.

That isn’t the only sweet moment of the evening, however. Billy, despite how the Viktor thing happened, shoots his shot once more and Petra is receptive. It isn’t clear if it is just thanking Billy for being a friend, despite what went down or returning his feelings, but they do get to end the dance together. 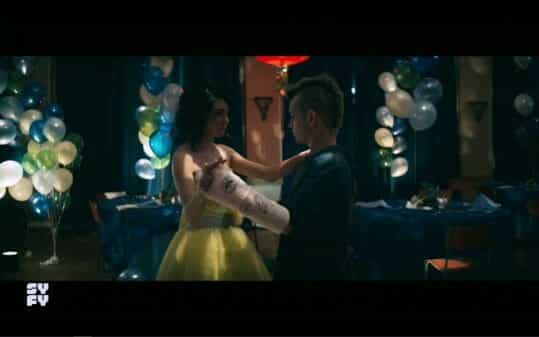 Being that King’s Dominion isn’t a normal school, and Master Lin has borderline tried to kill his students previously, can you even imagine what the final is? Also, taking into consideration Mr. Denke was broken out of prison, and we see another instructor who was a serial killer, there is a need to wonder what the vetting process is like for both staff and students? Also, why, when it comes to rats and instructors, are these specific people chosen?

But, while, like every episode, questions are added to how things work, there is perhaps one vital answer. Well, if not answer, a response. With learning in episode 2 that Saya was assigned to Marcus and her fate tied to his, this could be Master Lin responding to the issue of how “rats” are treated as King’s Dominion. Also, taking note Marcus and Saya wouldn’t adhere to the same group, it pushes the idea that this is Master Lin’s mini-rebellion.

What I mean by that is, clearly, as seen in the next topic, Master Lin doesn’t agree with the ways of the world, including the power structure of his school. So, by having it where Maria and Saya are roommates, pushing Marcus to be watched over by Saya, and situations like that, it weakens the “us vs. them” dynamic. Something that, as seen during the hazing and with Petra, only creates new masters who are as bad, if not worse, than the old ones.

Master Lin’s master plan aside, I hope Viktor gets majorly f***ed up for what he did. Thus far, we haven’t seen Petra do as Maria and Saya and show herself to be an utter badass. She probably is, but rather than present her more vulnerable side as a private thing, it has felt she lives that more out loud. So for her to get comfortable with a guy, a legacy at that, who defends her as much as he brags about having sex with her, it makes you want to rage.

Though, at the very least, from all the drama Viktor caused, with help from Brandy, it has brought the rats closer together. Also, maybe for the first time, Petra realized she had people willing to not only hang with her, just so they aren’t alone, but she is part of a healthy family-like unit.

It has been around 20 years that Mr. Denke has worked at King’s Dominion. He was broken out of prison, even made a pledge to Master Lin’s father when it came to his commitment. Yet, as noted above, he doesn’t believe the purpose of King’s Dominion he was sold on exists anymore. He is teaching well-trained killers, those who are already the elite, to become more powerful. All the while, kids like Marcus, those who are supposed to be the disruptors and the kids they should be catering to, look what happens to them. They are mercilessly bullied, despite the so-called rules of the school, and aren’t given the same opportunities as the rest of the class. The school dance alone, a legacy only event, shows the clear social order that Master Lin supports.

So, with that in mind, Mr. Denke tries to peacefully resign. However, despite Master Lin’s sentimental feelings, the higher-ups deny this request for they believe Mr. Denke made a lifetime commitment. One they have no intention on letting him turn his back on. So, with some Potassium Chloride and an ass whooping, Mr. Denke is allowed to leave with it being clear he will be hunted. Something Master Lin didn’t want, he tried to even offer Mr. Denke a sabbatical, but this was denied. With Mr. Denke on the run, so comes the question if we’re still going to stick by him or if with his absence, this might mean we’ll get to know other instructors more. For right now, we may know the face and class some of them teach, perhaps a name, but not much more beyond that. Which could very well be so the show doesn’t feel bloated, but it does leave it so there is a certain lack of investment.