Deadly Class comes to a bloody end with a few unexpected deaths and the family in disarray.

With Diablo’s men on his tail, Master Lin really gets some cardio as he runs, tries to get his daughter up to his stride, and whoops some ass. However, outnumbered and outgunned, it seems like he is done for. What also doesn’t help is Diablo wants him to lose a child to truly know how he feels.

As for the rest of the gang? They show up to Shabnam’s house, and things are eerily quiet. Leading to, for but a moment, almost everyone letting their guard down and that allowing for an ambush. One that causes Saya to nearly die, as Maria watches on, and Chester to get a leg up on Marcus and Lex.

But, amongst this chaos, Petra and Billy have a sweet moment. One which almost leads to a kiss but, as always, Lex gets in the way. 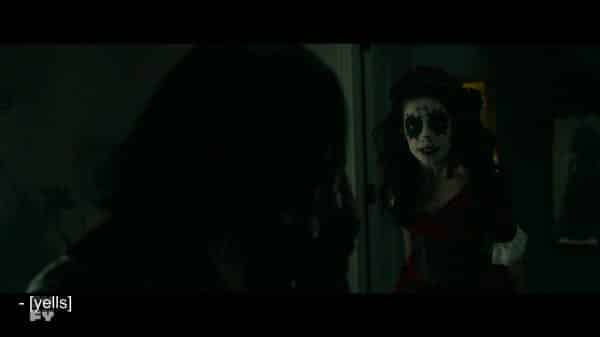 With Maria nearly letting Saya die, and being confronted about sleeping with Marcus, those two end up in a tussle that ends in more of Chester’s family dying but also Saya calling it quits. She is done with this faux family nonsense since she feels all it does is drain her and give nothing back. But, even with the two fighting one another, and Saya seeming done, let’s not pretend there isn’t a chance the girls may reconcile. Especially since the person, Marcus, who split them apart is no longer going to be their problem.

But when it comes to reconciliations, Master Gao and Lin might be too far gone for that to happen. After all, he tried to kill her, she took Nahia and left him for dead, so they likely aren’t in a good place right now. Yet, if Master Lin survives after being shot and beat up, he can at least attempt to continue to run King’s Dominion. As for Nahia? Well, she is off to take The Great Exam and hopefully survive.

And So It Ends: Maria, Marcus, Diablo, Shandy, Chester, Lex

In the end, all Chester wanted was some acknowledgment, perhaps love, and a sense of family. You know, like what Marcus built at King’s Dominion. For while he kind of has this with his crazy family, it just isn’t the same. So while he seems ready to publicly execute Marcus, then Marcus plays some mind games. The kind which push the idea those two could be friends, Chester could join King’s Dominion and really make something of himself. This is done just long enough to lead Chester into believing Marcus and then being attacked.

However, Marcus doesn’t move fast enough and is nearly killed. Luckily, one of the dogs Chester has sex with is locked up close by, and upon being released, it goes for the juggler. Leaving Shandy to videotape that as Marcus emerges and comes face to face with Maria. An encounter which has Marcus saying all the wrong things and making her seem like an obligation or he was with her because he was going through the motions. Leaving her beyond upset but realizing that being heartless might be the way to go. Especially since everyone she meets is like a rope to hang herself with.

Though, the real rope may end up being Diablo who, as Marcus holds Chico’s frozen head, with Maria by his side, seems very suspicious. And while you could assume Maria would or could turn this around, considering Lex walks out and is promptly shot, let’s just say Maria has very few words to say to not follow Lex into the ground.

It Was Truly Written To Be A Season Finale

Lex might be dead, as well as Chester, Saya is done with Marcus and Maria, Petra and Billy almost kissed, and Marcus has seemed to realize revenge isn’t worth it. It’s better to protect what you have than try to avenge what is already lost. But with guns pointed at him and Diablo’s child’s head cradled in his arms, it’s hard to say what may come next. Leaving you a bit anxious but also a bit happy.

Anxious since only the comics could say what happens next and who knows if the show may diverge from what happens in that. Then there is a sense of joy for a few reasons. First and foremost, the show ended before it could lose its luster. For many shows this violent, this graphic, this odd at times, once you being accustomed to how zany it can be, the fun is gone. Secondly, while it left us on a few cliffhangers, it also wrapped up Chester’s storyline, ended Marcus’ relationships, and pushed Petra and Billy forward – with Lex maybe no longer a wedge between them.

Not to forget, it made it so you have to watch the season 2 premiere. For whether it picks up where it left off, or there is a time jump, we’ve come too far and become too invested to leave and never return.

You’ll End Up Feeling For Chester

For a good part of the show, it was hard to not feel a bit indifferent about Chester. He was the closest thing to an absolute villain, but he was made out to be with an almost Joker quality to him. Just without a Harley by his side and his murders, well lacking the panache he thought they did. Yet, with learning his backstory and seeing how willing he was to let bygones be bygones with Marcus, you have to feel bad for the psycho.

Yeah, he screws animals, with dogs being his favorite, but who haven’t we met that’s a bit twisted? After all, as said in the movie Big Fish

“[…] most things you consider evil or wicked are simply lonely, and lacking in social niceties.” So who is to say Chester wouldn’t have become different if Marcus’ olive branch wasn’t filled with thorns and poision?

While Billy isn’t a saint, nor Petra, like Willie and Gabrielle, it’s hard to not root for the two being together. Especially after Petra nothing they are all like her family, and it seems, while she is kind of interested in Lex, Billy is the one who really has her heart. But, to add a layer to it, it almost seemed like she was willing to give Billy a kiss because she liked him and not because she was afraid to lose him otherwise. Which was what allowed the moment to seem pure in a way.

I get that Willie is with Gabrielle, riding off to freedom, but it felt wrong not seeing him at least once. Granted, Petra and Billy filled the quota of the cute moment he and Gabrielle usually have but his absence was felt.

But Did They Die?

While cliff hangers are good to drum up anticipation for another season, they are also immensely frustrating. Especially when they coincide with a character’s death. For even though Lex wasn’t a top character, he was still part of the family. Also, when it comes to Chester, while Maria and Saya are upset and beefing, neither have the potential to become big-time villains.

Also, before I forget, there remains the question of Master Lin’s fate. If he dies, will Master Gao take over and what would that mean for King’s Dominion? Not just for Saya, Marcus, and our leads, but also Viktor and Brandy who tried to kill her? Assuming she didn’t already handle them.

It Was Truly Written To Be A Season Finale - 86%