This episode is a major turning point as it is Zelda and Faustus wedding and Faustus, increasingly, is accused of trying of heinous crimes.

At this point, new Adam has undone the distrust Lilith has had with old Adam, the Dark Lord, maybe men in general. Hence why when the Dark Lord pushes her to refocus on influencing Sabrina, she finds a way to protect Adam since it seems she really does love him. Said word, “Love” could also be used when it comes to Nick since, after Lilith glamors herself to pretend to be Edward, Sabrina has Nick go to the bottom of the ocean to get her father’s manifesto. One he was to present to Enoch 16 years ago but died in the Devil’s triangle, of all places.

Which pushes that old idea that Father Blackwood was the one who murdered Edward and Diane. An idea which isn’t on Father Blackwood’s mind for his misogynistic manifesto is all he cares about as he plans to set not just his coven, but all those under the Anti-Pope into a solid state of patriarchy for generations. Well, at least 100, considering that is how long it has been since the last referendum.

If you thought Father Blackwood was bad, Enoch is worse. Just the way he compliments young women shows he is a dirty old man and one of the Judas Society confirms it. But it isn’t clear if Father Blackwood threw any of the girls his way. What is clear though is Sabrina, with no regard for Father Blackwood, uses Ambrose, who is supposed to protect the Anti-Pope, speaks with Enoch and presents her father’s recovered manifesto and that sends Father Blackwood into a loop.

Meanwhile, as this happens, and as part of Zelda helping Hilda’s excommunication be undone, Hilda is meeting with Shirley. Someone who apparently has held a grudge against the Spellman family since Edward rejected her for a mortal. So, to keep her away from Zelda’s wedding, Hilda, who she makes seem meek and easy to use, poisons her with cyanide as a warning.

While it remains unclear if Father Blackwood murdered Edward, or even if he murdered Enoch by using his Judas Society, what is clear is he has covered his tracks. How? Well, he kills two of the boys involved with the murder and nearly kills Ambrose. Someone who hides out at Dorian’s and because of Dorian, now Ambrose thinks Father Blackwood killed Luke.

It doesn’t end there. Finally, after she almost murders him in his sleep, Prudence is recognized as a Blackwood and saves her dad before he is killed. Mind you, he was almost killed at his wedding when Sabrina, like the impetuous person she is, tries to get Father Blackwood to confess his crimes as her father. Leading to, because she was doing far too much, Ambrose being put in a cell, rather than killed like the rest, and Sabrina being expelled. Nick does too which pushes the question of where is he going to live.

Making it so all Sabrina tried to do is for naught and leaves her expelled, yet surprisingly not excommunicated, Zelda still marrying Faustus, and Prudence running the academy. Why? Well, with the anti-pope dead Faustus has to head overseas and with him just married too, he is trying to two and one his honeymoon like he did his wedding. Showing his ambition has no limits.

[…] marriage is a walk down the primrose path towards a woman’s destruction.
— Lilith

It Always Begins At The Top

What we see throughout the show is how setting an example affects those all around. As noted, Sabrina is basically Zelda with different values. We see that in how aggressive she is, how cutting she can be at times, and how she stands up for herself. But, we can also see, in a negative way, like with Enoch, how setting an example can be negative. The reason why Father Blackwood feels he can be so bold is because Enoch is arguably worse than him.

Heck, even in the mortal world, which isn’t featured this episode, take note of Roz and her father. With him, allegedly, taking money from the congregation for personal use, so comes the need to question his bishops and how they act. Whether he, despite being a man of God, might be fostering wolves to prey on the sheep looking for guidance and protection.

The Cunning of Father Blackwood 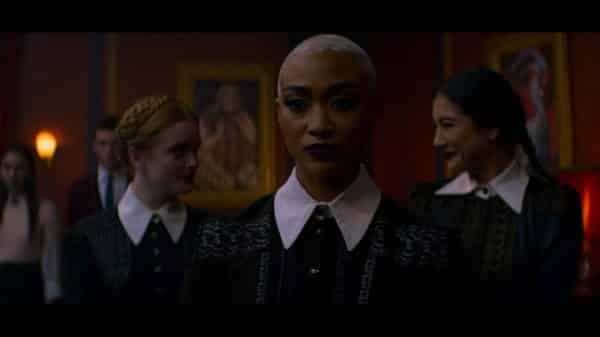 Zelda has met her match. After failing to fend off Sabrina’s advances in the church many times, Faustus looked like a punk hiding behind his title. However, between the magic we’ve seen and manipulation, it really forces you to recognize he is a badass mother f***er. After all, he probably did kill Edward, more than likely had Luke killed, and set up Enoch to be assassinated. I mean, is that not why he rewarded Prudence, besides her being his back up? For with a man who has plans like him, loyalty is everything and bringing enemies close, like Zelda, Ambrose, and Prudence, has to be part of the plan.  Especially since, as seen with Ambrose, it allows you to get them into the kind of lull to eliminate them.

An All Witch Episode

Don’t get me wrong, I love Theo’s storyline dealing with being trans and trying to make it so how he feels matches with how he looks. Also, Roz’s issues with blindness, her cunning, and her dad are interesting. However, once you throw Harvey in there things becoming a drag and he is one of the top male characters so he shows up fairly often.

So, having a witch episode and them touching on conspiracies, us seeing Father Blackwood push his agenda, and so much more, it was just a welcome change. Plus, we’re halfway through the season so we needed a pop more than just another episode of mortal drama.

Nick Is Honestly Just The Best

While Nick’s motivation is definitely about having sex with Sabrina, considering how far he is willing to go, I don’t think he’ll leave her when he gets what he wants. Yet, with her getting him expelled comes the true test since his life has mostly been dedicated to her with some time and affection being the only thing given in return. So whether she returns his showing of grand feats, or at least gives him somewhere to sleep, should be interesting.

Despite being as much of a badass as Sabrina and Zelda, we’re consistently reminded that Lilith is also a tragic figure. One who gave her life and devotion to a being who, like Father Blackwood, thinks less of women despite how much they support and bolster them. So to see her with Adam, a man who wants to be her equal and see her as one, it reminds you of what she has never had. It reminds you that she never got to experience love but just a form of dependency. Making the fact she found love, with a mortal, one named Adam of all things, and the Dark Lord is jealous? Oh, it is too sweet and seems likely to become tragic.

Can Zelda Really Do This?

Walking behind her husband, likely being told to be silent in meetings, Zelda may have had grand plans, but I don’t think most, if any, may come to pass. She may want to consider herself lucky she had just enough influence to get Hilda back in the church. Though considering Sabrina’s acts, unless Father Blackwood keeps Hilda and Sabrina in since they’re technically family, all that might be undone.