The Dark Lord decides to test Sabrina’s willingness in a bet with Lillith and in doing so, he finds and begins to exploit her mortal weaknesses.

Zelda Is NOT One To F*** With: Zelda, Father Blackwood, Shirley

Shirley, likely because of Zelda’s dramatic rise, has decided to be the Prudence to her Sabrina. Well, Prudence as she was early in season one anyway. So, Zelda decides she must teach her a lesson, with some help from Hilda. Long story short, using what looks like a voodoo doll and a worm, she now has some realm of control over Shirley. Making it so, as she works with Father Blackwood on his play, and beyond, she won’t have to deal with Shirley or her little minions.

A Wager: Lilith, The Dark Lord

As you can imagine, after many millennia, the idea of Sabrina, some half mortal younger than Lilith’s eyelashes, rising above her is an insult. Much less, her becoming a prophet, a herald who opens the gates of hell? No sir. So, she wagers that Sabrina isn’t ready or worthy. This challenge, wager, the Dark Lord takes up for he tires of Lilith and her forgetting her place.

It’s Not What I Want You To Do, But You’re Willingness To Do It: Lilith, The Dark Lord, Sabrina, Theo, Hilda, Harvey, Nick, Father Blackwood, Zelda, Ambrose

When it comes to showing devotion, it seems The Dark Lord is a trickster. Well, for the most part. While for those like Hilda his tests are but a prank, Ambrose caused great suffering. Yet, as always, Sabrina makes things hard. She won’t steal a pack of gum, won’t do something to a milkshake to keep Harvey from canoodling with someone else either. The closest thing to a win he has is inadvertently helping Theo get revenge on Billy who refuses to let him use the boy’s locker room without making a show out of it. The Dark Lord: Remember, you swore you would be willing to do what I asked.

Yet, as Sabrina’s friends begin to suffer, Salem is made sick, she gives in. But, The Dark Lord, while he tests, he also is giving. Hence why Sabrina goes from understudy in Father Blackwood’s play to being the lead – playing Lilith to Nick’s Lucifer. The performance, hot and a bit steamy, was a long time coming. For as the Dark Lord tempted her, he pushed her urges. Leading to her nearly having sex with Harvey and getting a bit hot and bothered by Nick.

But, keeping it professional, and her legs closed, she gets through her interactions with these two without anything more than passionate kisses. And when it comes to Nick, theirs was on stage, and it brought the real Lilith to tears. Though, to always make sure he gets the last laugh, The Dark Lord makes it clear that he is in control and likes Sabrina’s chemistry with Nick. A comment which may or may not affect if Sabrina decides to ever be with him. 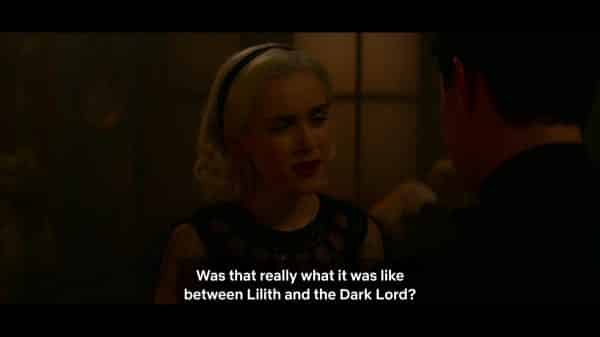 Sabrina: Was that really what it was like between Lilith and the Dark Lord?

Seeing Lilith’s life played out, after being banished from the garden of Eden reminds you that as evil as she seems, she kind of isn’t. Because she wanted equality, she was banished and largely erased from history. If not made into this evil being when, truthfully, she just wanted to feel empowered. For while Father Blackwood did fudge things, make her less of a badass, beyond his sexism you can see the benefits of his changes. Heck, perhaps there is even enough to say his writing made him a hypocrite. At least, if you consider the idea that Lilith was the first disciple, from what it seems, making her the original followers, perhaps prophet, if not high priestess.

I’m perfectly fine if Theo’s whole arc is about gaining acceptance from the students of Baxter High. I do wonder though if Dorothea may get involved or if she isn’t going to show up ever again? 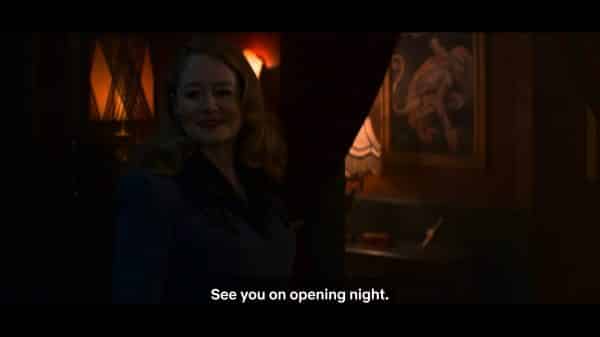 Zelda: See you on opening night.

Even when Zelda isn’t on Sabrina’s side, you can’t hate her. Miranda Otto has made Zelda the kind you either love to hate or someone you hone in on for the way she delivers her lines shows you don’t need an incantation to burn someone. With that said, it would be interesting to see her go against someone who actually stood a chance. Whether or not Hilda provides an assist.

Shirley made such a big stink she got fired, Zelda had reservations, and Sabrina made it seem, if she played Lilith, she’d make a stink and yet, no one did. It seemed anti-climactic, especially considering Sabrina and Father Blackwood’s relationship.