The dark and progressive Chilling Adventures of Sabrina continues with Sabrina beginning her path to High Priestess and the introduction of Theo.

As we saw throughout the first season, Theo (formerly known as Susie) has long had issues with her perceived gender. However, it has come to the point where Theo has decided to take firm ownership of who he is. Which, when he first asserted himself, when known as Susie, it was assumed him trying out for the boy’s basketball team was a feminist statement. Another way to stick it to the patriarchy.

But, as Sabrina helped from the bleachers, far from where her friends could spot her, and Theo made baskets, it seemed like the right time. Not to come out but simply correct his friends on what his name is. Something which may take Harvey a beat to adjust to but with Sabrina gone, it seems he has grown close to Roz who is willing to walk him through it. Maybe even, in time, end up walking with him hand and hand.

You may wonder why Sabrina didn’t join the celebration after she helped Theo possibly get on the basketball team and has distanced herself from her friends. You wouldn’t be alone as Hilda wonders this as well. The simple answer is the Dark Lord. With the possibility of being called on at a moment’s notice, to do anything, it makes being around her human friends seem dangerous. For what power would she have to not give into him and maybe cause her friends harm? 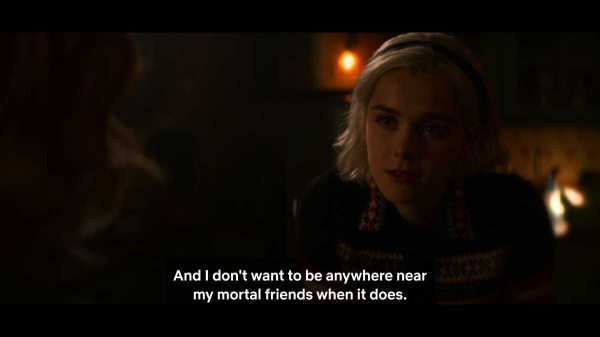 Sabrina: And I don’t want to be anywhere near my mortal friends when it does.

So, rather than risk the lives of the mortals she loves, she has decided to dedicate herself to the Academy. A decision Hilda may not like, but she accepts. Even if Sabrina’s commitment to the dark arts is also bringing out a more hellish side to her. Beyond her increasingly rebellious nature.

A nature that, with Sabrina committing herself increasingly to the academy, naturally irks Father Blackwood. Especially since now she wants to become what has traditionally been known as “Top Boy.” Said position nearly guarantees the possibility of becoming the high priest as you are groomed and mentored by the then high priest. Thus making Sabrina nominating herself, in competition against Nick, troublesome. After all, Father Blackwood’s desires is basically to be the Trump to Edward’s Obama and take the coven back to the perceived good ole days.

Thus leading to why Sabrina, as The Plague Kings attack her, is led to believe Father Blackwood, if not Luke, are trying to sabotage her. For with the goal of Father Blackwood being to have Sabrina mind herself, he repeatedly tries to embarrass her in the challenges set forth. In the inquisition, she is given impossible answers which, if it wasn’t for the support of Prudence and her crew, she’d never get. That is followed by the Boil and Bubble challenge which has her and Nick mixing in ingredients to a potion and whoever causes it to petrify would lose and drink the mixture. She loses that challenge, but in drinking the potion, she wins many supporters.

Leading to the final task, the conjuring. One in which Sabrina and Nick were supposed to summon demons and keep them in their sacred geometrical symbols. However, with Sabrina accusing Nick of cheating, thanks to some poison in the well from Ms. Wardwell, he decides to prove he is on her side by joining her in summoning the Plague Kings who speak as if they acted on their own. This leads to Father Blackwood sending off the kings and deciding to forego the vote and placing Ambrose, who wasn’t a student, as Top Boy.

Leaving but a handful of things left to note. For example, Zelda pushes Father Blackwood to define their relationship since she doesn’t like how people are talking. Also, Sabrina and Nick go on a date. Lastly, with all that is going on Ms. Wardwell decides she and the Dark Lord need to speak, so she summons him.

While Still A Bit Heavy Handed, You Can’t Help But Root For Sabrina’s Aggressive Feminism

Chilling Adventures of Sabrina features an aggressive form of feminism. The kind which is about repeatedly challenging patriarchal authority, trying to obtain formerly male positions of power, and publicly call out each and every clear or assumed obstacle. It’s wonderful to watch even when you can see the message is heavy-handed.

Mind you, not in terms of Sabrina’s fight but her enemy in Luke, Father Blackwood, and arguable Ambrose too. Each one, in a different way, are a bit blunt in terms of being an oppressor and lack a sense of nuance. Instead, each fit what feels like a trope. Father Blackwood, like a Bond villain spoof, is way too obvious about what he plans to do and how he will maintain his power. Luke, with him being sexist to Sabrina’s face, shows how one grows into a Father Blackwood with just getting a taste of power. Then, when it comes to Ambrose, we’re reminded, unfortunately with a Black character, how standing by allows the status quo to remain. Yet, maybe it is good a Black character is in this position for there is a reminder of the cultural complexity of Ambrose’s situation. He wants the privileges of being a warlock yet as a Black warlock, of which we don’t see many, there is this vibe that even as Top Boy, his ability to become High Priest could be limited. It’s one of those stories which could possibly develop, and let us know how deep does prejudice go within the coven.

Zelda Battling The Patriarchy In Her Own Way

Zelda is a much more coy feminist than Sabrina, even if she doesn’t necessarily like saying so. After all, who raised Sabrina to be as aggressive as she is or, rather, when it comes to initiative and setting an example, do you think Sabrina takes more after Hilda or Zelda? Don’t get me wrong, Hilda we see in Sabrina’s dealings with mortals but witches and warlocks? That’s all Zelda.

So even if she is just an influence on Sabrina and pushing Father Blackwood to step up and claim her, it’s something. Plus, imagine the work she could do from the inside. For, no offense to the gossip, they probably aren’t as an empowering force as Zelda.

While we have a whole lot of examples of bad behavior and oppressors, there are also allies. Nick, even if it is partly because he wants to date Sabrina, showed himself as an ally. Not by secretly supporting Sabrina and then saying nothing either. He nominated her to go against him, colluded with her to expose who was trying to set her up, and has shown, even if the end result he desires is to date her, he is also capable of being her friend as well.

Following that up is Harvey who, may not have been as active and vocal as Nick, but still showed that just saying something, even if just telling someone to stop, is a meaningful action. Though, let’s not downplay Harvey repeatedly passing Theo the ball to give her the opportunity to prove themselves and doing so possibly at the risk of not proving himself worthy for a spot. 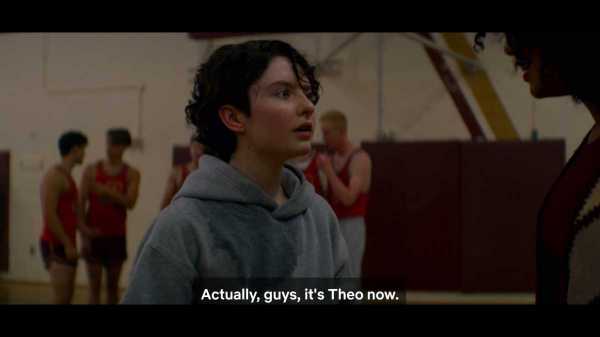 There is no such thing as one size fits all representation. Just because Orange Is The New Black had a trans character, Pose has multiple trans characters, Good Trouble has a storyline featuring a trans character, and so much more, that doesn’t mean we can’t use another. There isn’t a quota. Also, no show, even one like Pose, can encompass the journey of confirming your gender, living your truth, and what it means to be trans. Especially in a society which, from the Harveys of the world to the more dangerous ones out there, either don’t understand or choose not to. Perhaps even threaten your life since it pushes against what they know or were taught.

Including all that is mentioned above that he is the creator of, minus the Theo situation, him treating Prudence as a wet nurse and denying her the Blackwood name is TRASH.

Get The Comic This Is Based On From Amazon