Bridgerton: Season 1/ Episode 5 “The Duke and I” – Recap/ Review (with Spoilers)

What is a marriage like between someone who grew up in a loving family and someone disowned? Also, what is King George like? Find out in “The Duke and I.”

The King And I – King George, Queen Charlotte

When it comes to the king, he has long existed but partly in the shadows. He was someone talked about almost as if Queen Charlotte tried to kill him and was waiting for news of his death. However, the truth is that King George has a memory loss disease, and with that, he may remember Queen Charlotte, but other things, like the death of their daughter, he doesn’t remember. 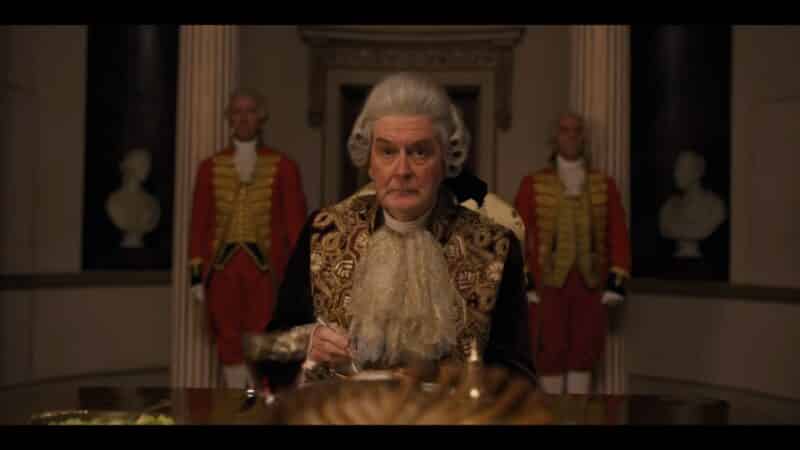 Hence why she is alone and doesn’t speak of the king. For on top of his memory, failing so have his manners since he would dare accuse her of doing something to their child and calling her words not for a child of God.

Some Secrets Are Easier To Keep Than Others – Henry, Benedict, Marina, Colin, Penelope, Lady Portia

So, while Benedict may not be gay, as shown through him enjoying Siena’s dressmaking friend, Henry is at least bi. If not, he has a wife for safety and society reasons but does entertain men’s lust when he can. Either way, his secret is safe with Benedict.

Switching to Penelope, her desires for Colin are becoming less of a secret as she gets her mother involved in hopes she can use her to have Marina steered in a different direction. However, while not outright desperate, Marina is determined and is more than willing to seduce Colin if she must. Though, her luck and Penelope’s misfortune make it, so she has no need to give herself over to Colin for the temptation enough pushes him to propose.

However, with him wanting a grand wedding, it will not allow Marina the coverage she seeks. Thus, maybe there might be hope for Penelope in the long run – unless Colin truly does care for Marina to the point of saving her from how society will see her.

As been established, the Queen doesn’t take well to being wrong, and while Simon and Daphne are a cute match, it wasn’t necessarily the one she dreamed of for the diamond of the season – especially once a Prince became an option. Thus, for rushed nuptials, it seems she blocked what was desired.

That’s a problem since Cressida, upset Daphne stole the Prince from her and then tossed him aside, is ready for some form of revenge. After all, the Prince left after Daphne was through with him, so it isn’t like she’d even get to be some form of sloppy seconds. But, despite her threats, Daphne shows some bite and reminds her, you don’t want to make an enemy of a duchess – especially those with no title at all, like Cressida. 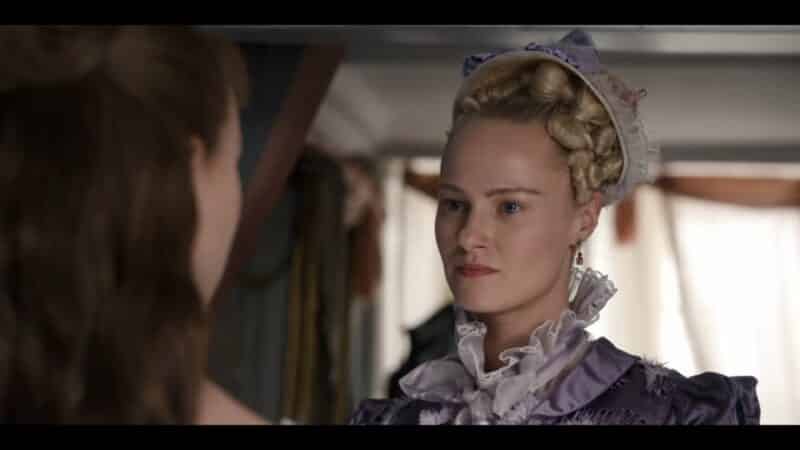 Though Cressida, for a good portion of the episode, isn’t a real issue. The true issue is Simon, who is drinking to the point Will has to help him save face, and his wife Alice has to get involved. Now, as for why Simon is borderline making a fool of himself? Fear. The lack of ability to have children makes him feel his passions have trapped Daphne, and so he does as he was raised – to isolate, alienate, and be quiet.

This, as you can imagine, doesn’t work for Daphne since she has been courting all season, was raised in a large family, so while silence is always welcomed, it is also deafening. But luckily, after Simon’s confession to the Queen regarding everything that happened, ruse and all, they are given the right to wed, and things remain awkward from when permission is given until their wedding night. For that is when Daphne and Simon finally confront each other about how they feel, and with that out of the way, Simon opens up and seduces his wife until they are consummating the marriage.

With Lord Bridgerton dead, and King George not all there, we don’t really get a chance to see two people in love with each other or well matched. At least, until seeing Will and Alice. They are really the only couple on the show you want to invest in. Especially since, with them being working class, Alice is a lady, but she has the bold demeanor of Eloise.

Take note, Will is a boxer, amongst other things surely, and she is very much in his affairs from trying to push Simon to be a sponsor and making sure her husband’s relationship with him isn’t one-sided. Add in their cute back and forth, and while Simon and Daphne have a certain lustful thing about them, the actual two people with #CoupleGoals is Will and Alice. 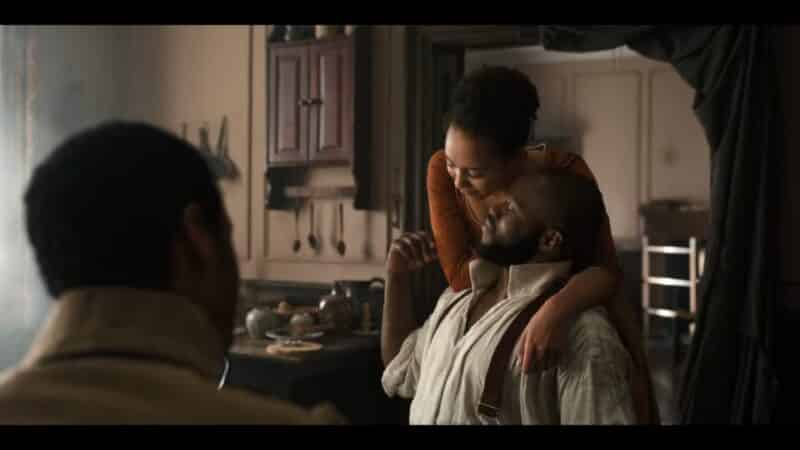 Though I must admit, even with my reservations about their age difference, Simon’s love confession had me tearing up and a little emotional. Mainly due to Will really pushing the idea that Simon’s struggle with being vulnerable makes it hard for him to open up. For while Lady Danbury saved him from being socially maladjusted, sadly, there is only so much she was likely allowed to do.

So, in many ways, Daphne has continued the education Lady Danbury started. For though we don’t believe unconditional love can exist, Simon needs that feeling that someone can love him without it being out of obligation to a friend, similar to Lady Danbury. Also, Simon needs it to not be due to his money and title, which you could say is Will’s reason. Lastly, Simon needs to understand love goes beyond the fun times two people have together, and it being factored in how long you have known them, a la Anthony.

Eloise is the type of character you want more from, since she is the Black sheep, yet with her not being the star, you feel like you have to take what you can get. Be it, Daphne, making it seem she wants to make sure they keep in communication, despite their difference. Also, her reconcile with Penelope since that seems to be her only friend. However, with her squared in on Lady Whistledown, it appears she’ll be on some B storyline potentially ruining one of the best aspects of the show.

All I’m asking for is, give Penelope something to be happy about. Her best friend and her no longer speak, the boy she crushes on is focused on someone else, and that person, once a friend, is willing to trick said boy for her own gain. And while it was kind of Lady Portia to aide her daughter, she didn’t necessarily stick to it. Leaving you to feel that Penelope has no allies and is going to be forced to watch from the sidelines as people find love, mystery, fulfillment, and she, at best, lives vicariously.