Wherever I Look
Recaps, Reviews, and So Much More
Home TV Series BONDiNG: Season 1, Episode 3 “The Past Is Not Always Behind” – Recap, Review (with Spoilers)
TV Series

BONDiNG: Season 1, Episode 3 “The Past Is Not Always Behind” – Recap, Review (with Spoilers)

We dive deeper into Tiff and Pete’s shared past and get to learn why she is so distant.

It isn’t clear if Frank is curious about butt play in general, or being with another man, but with Pete confessing he works with Mistress May comes ideas. The first one being Pete, to clear his rent payment for the month, sticking fingers, with an s, up Frank’s butt. Now, whether or not Frank cleaned himself out beforehand? That isn’t gone into. All we know is his girlfriend walks in and promptly knocks Pete out.

Reminiscing Over The Past Since The Present Sucks: Chelsea, Tiff, Pete One thing Tiff wasn’t expecting, or hope wouldn’t happen, is Pete getting comfortable with what Chester does. For while she likes seeing a different side to Pete, it doesn’t mean she wants to lose the Pete who is her best friend. So with the Frank situation, she doesn’t support it at all.

Yet, that conversation is cut short by Chelsea. Someone from back home who now finds herself drinking alone since she has no friends. So upon seeing some underclassmen, she tries to bond with them, but neither Pete nor Tiff seem interested. However, in a way, with learning what we do later, it makes you wonder when Tiff arrived in NY and lived alone, if she maybe felt as isolated as Chelsea?

You Were The Only One Nice To Me: Pete, Tiff 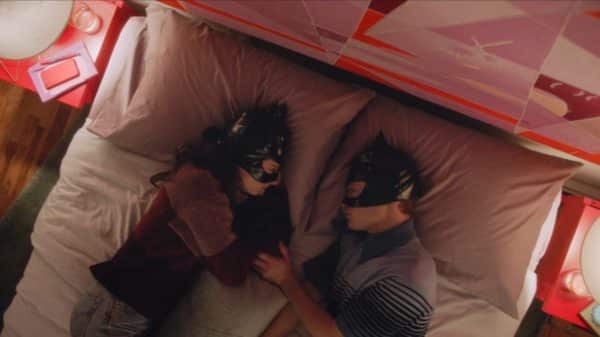 With 13 years of being friends, you may wonder how did they do it? Well, the source of what kept them going is Pete was the only guy who didn’t see and treat Tiff as a piece of meat. For while he was a loser, he was kind, and though she went through a lot of football players, it seems sex with Pete may have been the few times she had sex due to her emotions and not for validation.

Unfortunately, though, the sex was bad and with bad sex comes the question if the relationship can survive? To which Tiff seemingly thought it couldn’t so she ghosted Pete after high school. A decision he was rather hurt by but, somehow, they patched things up.

You have to admire how Tiff is played to be distant yet not dead in the face or her emotions. Clearly, she is kind of lost in her own head and seems to find being Mistress May, anyone but herself really, a relief. This especially becomes clear as Pete did his own psychological trick with the masks. Thus leading her to open up in ways she likely wouldn’t on the day to day.

Yet, I must admit I wonder how much of that was triggered by Chelsea popping up? Did she perhaps remind Tiff of how lonely she was before Pete returned to her life? Since Tiff may have work and school, but it appears she isn’t necessarily trying to be social at either place. At school, she arrives a bit late and leaves promptly. Then, at work, she does her job, cleans up, and goes. Making the possibility of Doug entering her life interesting. Particularly since he shows signs of genuine interest versus wanting to get into her pants.

Pete’s Reason For Hiding Who He Was

I must admit I was a little confused by what Pete meant when he spoke about why he was in the closet as long as he was. Mostly because he subverted the expected narrative of it being for safety and more so made it was for survival in a different way. Almost like he was in the closest for it was his sanity more so than his fear of persecution. Which I get to a certain point, but it does make me wonder if you have to be a gay man to get it. Similar to you having to be a woman, Black, a mix of the two, Latinx, etc to get other deeply personal cultural references.

As Tiff opens up, and Frank in a way too, BONDiNG proves itself able to handle the delicate balance of being a comedy with characters who have deep-seated issues. Nothing which is insurmountable but, like any person with knowledge of self, makes them works in progress. The kind you want to see grow, mature, and eventually reach a healthy point in their life.