During a trip to Canada with her kids, a family secret is learned about from Sam’s uncle Lester.

Those Ghost of White Rock: Duke

For some reason, it seems Duke encounters a lot of spirits within White Rock. The first being this woman Jarita calls the Sad Lady. Someone who Duke encounters on the beach. Following that, while at a museum, this first nations man, someone yelling about how his family’s things were stolen, yells about and only Duke seems to recognize him. To say the least, it is all rather strange.

Something revealed to us by Sam, but is nothing new, is that she likes feeling needed. Perhaps even wanted. To it should come as no surprise she decides to visit her aging Aunt Jarita and Uncle Lester. Especially since, at least in my mind, they brought some sense of normalcy to Sam. At least in terms of what family should seem like vs. how Phil usually was/is.

I mean, look at them. They are an old English couple, together for more than 30 years at this point, even moved to Canada together, and they seem so well adjusted. Though, no couple is without their secrets. Of which Lester’s little sister Marion is his. You see, Phil, perhaps after she was pushed out of the family for marrying a Jewish man, seemingly decided to just not speak on her family. And while it is clear that, eventually, Lester was introduced, it seems that Phil’s family has made it a habit of cutting people out of their lives. For example, Donal, a brother of Phil and Lester’s who died? After his passing, he wasn’t talked about. Then the woman in question, Aunt Marion, after put away sometime in the 40s, it seems her name became taboo as well.

Which sort of shakes Sam to her core for there was a woman out there, who died in 83, while Sam was in high school, who she feels she kind of failed you know? Sam has such a desire to be needed, to help those close to her, even if they are a pain in the behind, that she feels guilt over this woman she never met. One that Duke may have seen the ghost of on the beach.

But, despite that rather somber topic, everyone had a great time. Even Max who is dealing with Harvey (an ex I assume), getting another girl pregnant. Of which she blames Sam since she wouldn’t let Harvey sleep in her room. Also, Frankie enjoyed herself too since Uncle Lester formerly was a man who was very much into building things and even catches fish with a net. Something which piques Frankie’s interest.

[Max says she feels stupid and her Aunt Jarita responds] That’s because you’re aware and you’re starting to catch a glimpse of what a big world you’re in and you feel small. 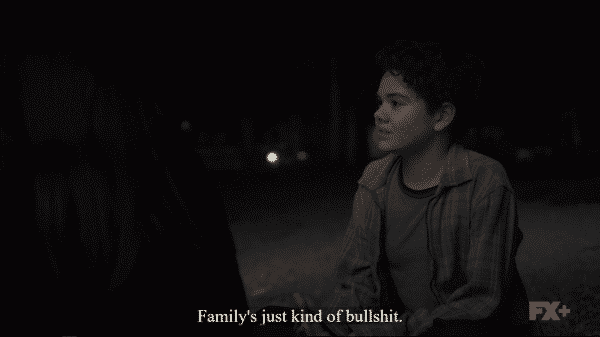 After hearing about how Donal, after his death, was never talked about; how Marion, after being committed, was never talked about; alongside how Phil was treated after she got married to Sam’s father, it helps put some pieces together. At least in terms of Sam’s family line and their issues. For there has been a lingering, though not necessarily pressing, question of why Phil acts as she does and how that influenced her being a mother to Sam. Much less, maybe how that affected Sam as a mother.

Well, now we have our answer. Phil seems so needy because she doesn’t want to end up like her brother or sister. Someone everyone knows about but doesn’t communicate with. They just pretend they don’t exist. Something which, maybe subconsciously, got passed down to Sam’s kids. With Max, all this guilt she likes to throw Sam’s way, maybe it isn’t because she is just a spoiled brat. Could it be that someone in the DNA of Phil’s family made it so this seething anger just comes out in how Max lashes out?

What I mean by that is, while we know Max and Frankie love their mom, they mentioned this feeling of abandonment in the Eulogy episode and also with how Sam favors Duke. Perhaps like how Phil favors Sam in comparison to her brother. And with that, Max’s guilt and her often being a real annoying mess isn’t just her being bratty but manipulating her mom the only way she knows how.

After all, I’m sure they have seen, or know of, all the trash their mom dates. Maybe they have even picked up on her need to be needed. So Max might be performing this helpless act because it keeps Sam engaged and monitoring vs. just letting her do her own thing.

As for Frankie? I think it is the same thing. She sees family as something unimportant because she has an uncle that never sees her, a dad which barely communicates, yet here is Sam. In my mind, either she is trying to annoy Sam because she sees, through her interactions with Phil, maybe that is how their family shows they care. They do so by annoying the mess out of one another.

Yet, on the other hand, maybe she foresees Sam abandoning her too and is just trying to speed up the process. Not get so overly attached that when it finally does happen, it is outright devastating. All because she thought Sam was different but, in the end, she wasn’t. She was like every other member of Frankie’s supposed “family.”