As Sam struggles with his first class, and Elsa deals with her fears, Casey is starting to realize Evan’s ambitions may not match hers.

With Sam at college, and refusing her help, and Casey shutting her out, as usual, it leaves Elsa with nothing but thoughts about what may or may not be happening between Doug and Megan. Two people who are uncomfortably close for her, and with them being invited to a conference in New York? Oh, the wheels are turning, and this leads to Elsa turning to Julia.

Someone who just had birth, so isn’t really in the best place to counsel, yet with only a kid to talk to for most of the day, Elsa isn’t the worst option. Plus, once she advises Elsa to step back, for real, and truly give space for people to come to her, she gets a free babysitter.

But things don’t end there. Before Elsa can step back, she moves forward and decides to use Megan leaving her jacket as a means to try to confront her. However, she loses the ability to do so and just asks about Amber’s time in college, and despite Megan knowing something is up, Elsa clams up.

Evan is a boy who isn’t disenchanted with his hometown, finds his job satisfying, and that is a bit of a problem for Casey. She is someone with options, a certain amount of privilege, and has college aspirations. Specifically, after Izzie brings it up, going all the way across the country to UCLA.

This causes an issue. For one, it leads Casey to push Evan to want to do more in life, and that causes a problem. Mostly in the idea that Evan isn’t good enough or doesn’t want enough. Also, with conversations about moving across country, it creates a notice that as much as the two love each other, there could be a time limit to their relationship. One that is only two years, and if Evan doesn’t come up with something, he may, at best, see Casey during breaks only. 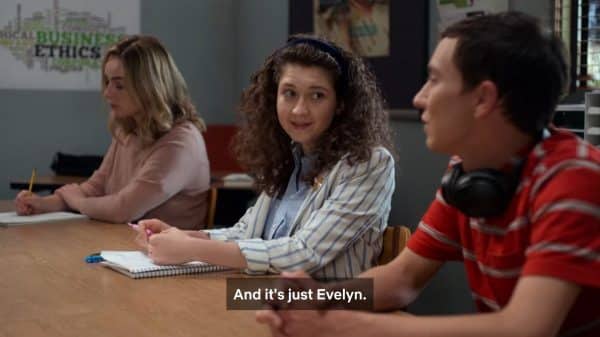 In professor Judd’s class, Sam gets his first experience of someone who doesn’t seek to really know him or adapt to him. All the professor wants to do is teach and likely takes the way Sam talks as sarcasm. Making it so Sam is finding himself trying to adapt to her and college as a whole, and struggling. This leads to him getting encouragement from Doug, but in the end, realizing Elsa was right, and he needs help.

Thus, he goes to disability services and on top of learning Jasper is already receiving services, he meets a girl named Sidney, who may have a crush on him, Mr. Rupolph, a counselor, and Evelyn, who handled orientation, it seems she’ll play a larger role in Sam’s life.

[let] the people in your life have the space to come to you.
— Julia

While opposites attract, similar people can often repel each other. Case in point: Elsa and Casey. For as much as Casey tries to be this chill tough guy, and sees herself as nothing like her mom, breaking it down, how different are they really? Whether we’re talking about her relationship with Evan, and the situation with Izzie, or how hard she goes for Sam, she pretty much is a doppelganger of her mom.

Taking it further, Casey trying to be everything to Izzie while also being everything Evan could want shows how much of a need she has to control the people in her life. Yet, when they push back, we see a similar reaction in her immediately getting vulnerable, a bit quieter, and very apologetic. Then with Sam, while Elsa doesn’t hit Sam, you can see Casey having a certain comfort level playing a role in Sam’s life which would make her put him before her own person. Maybe not forever, but longer than she should.

Evan Being A Small Town Boy With No College Plans

One of the things we don’t see enough are people who reject the idea of college. Not because of the debt, but simply because they recognize it isn’t for them. This we honestly don’t see enough. For with there being so many blue-collar jobs, and opportunities to learn a business and grow in it, is it wrong to reject the notion of college?

There increasingly is a tug and pull relationship when it comes to Sam dealing with having autism. On the one hand, it is part of who he is, it gave him a community, and despite the difficulties it causes, it has led to him making friends and even getting a girlfriend. Yet, at the same time, with him heading into a new chapter, so comes the question of what role he wants having ASD to play?

Lest we forget, Sam is on the path to being a man, and with him likely having no adult male examples of people with autism, he can only base his opinion on Zahid, his dad, Evan, and people like that. All of which have jobs, pay bills and don’t necessarily need someone to help them get through a day. So as much as it is great Sam asked for help, there is a need to acknowledge that, even with systems in place to assist him, he is still paving a road unique to him, which has challenges. The kind the system may not be equipped to fully help him with.

One of the things we hope for Elsa, going forward, is her finding something which is about making her happy. Perhaps the main issue with this character is her focus has long been at making herself small or useful to someone that with her being increasingly rejected, it leads you to reject her as well. So as much as you want to feel bad for what is going on with her marriage, and her dealing with a son who is asserting his independence, it’s hard to get energized.

Evan Being A Small Town Boy With No College Plans - 89%